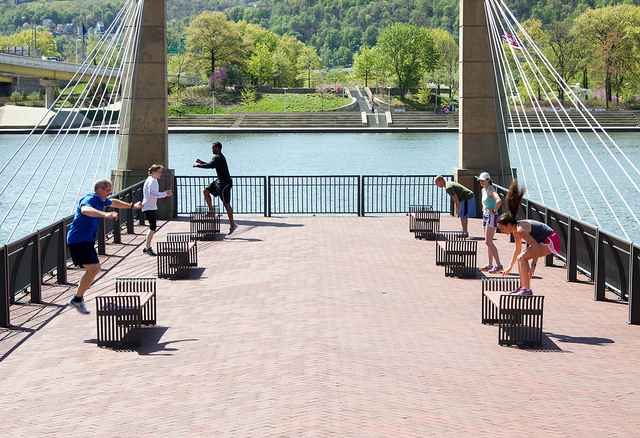 2014 is coming in like a wrecking ball — are you ready? What are your resolutions for the new year? If one involves you lacing up your running shoes and hitting the always-crowded gym, we’re here to equip you with some ammo. Workout song ammo, that is. Everyone knows post-holiday depression sets in all too quickly come January 1, but instead of hiding from the mid-winter blues from the warmth of your couch, this month, vow to hit the pavement or gym and jump on the fitness bandwagon with these 10 tracks.

2013 might be over, but artists definitely went out with a bang, and we’re the ones benefitting. Artists came, they twerked, they conquered, and we’re still reaping the benefits with numerous songs added to our workout playlists. Nothing makes exercising more exciting than jogging to the help of some new music, so click through for our picks and get to work. We promise you’ll feel so much better after.

1. On Top of the World – Imagine Dragons

We’re kicking off our list with a song that will really lift your spirits. In fact, it might even make you feel on top of the world. The catchy beat in this tune, coupled with a fast chorus, makes it the perfect workout ditty.

Whether you’re running, biking, lifting, or dancing, focus on getting your heart rate up during the chorus and then slow down the pace during verses. This will create an effective HIIT (high-intensity interval training) workout. This kind of short, intense training regimen is known to help improve fat burning and enable exercisers to get the most bang for their buck.

American alternative rock band Imagine Dragons was a fan favorite this past year, and although Demons and Radioactive were two of the group’s most popular songs, On Top of the World is definitely its best feel-good tune.

Because if Britney Spears can’t convince you to “work, b**tch,” we don’t know who can. Do Britney a favor this January and support her newest tune, Work B**tch. Not only does everyone love a good ’90s artist throwback, but this song is actually good and has a great beat for your workout. Plus, if Britney can work hard enough for a complete body makeover, so can you. Use this comeback kid as your motivation.

Our next track features a different genre of music. Many Jay Z loyalists highly anticipated the release of the rapper’s new album on July 14, and we think it’s safe to say he didn’t disappoint. There were a number of fan favorites on Jay Z’s Magna Carta Holy Grail, but Holy Grail stormed its way onto the playlists of many, with some of the credit going to an always welcome appearance by Justin Timberlake.

Holy Grail runs for 5 minutes, 38 seconds and is the perfect song to kick off a workout — it starts slow with Timberlake vocals and eventually gains steam. As soon as the song picks up, so should your pace. Jay Z and Timberlake say, “get running.”

We can’t forget about Jay Z’s wife. Beyonce shocked her fans (and the world) by dropping an album on December 13, with no advance warning. The new, self-titled album has now topped the Billboard charts for two weeks in a row, and Bey’s mix of slow songs, charging beats, and electro bleeps is enough to satisfy just about any audience. As for working out, we say XO is your best bet when it comes to getting your blood pumping. The track’s beat is fast, fluid, and the chorus is another good one to use as a pace dictator. Quicken your speed as the song progresses. You’ll love it like XO.

Next, let’s get to an album that had fans perched on the edge of their seats this summer. Less than a month before Jay Z released Magna Carta Holy Grail, Kanye West came in big with Yeezus on June 18. The album proved to be a summer favorite and continues to get radio play.

Off this album, we’re picking Black Skinhead to fuel your workout, because the track has a bite — sometimes, that’s exactly what exercisers need. Coupled with some strong drum action, Black Skinhead will get your feet moving and your heart pumping.

As for a more recent release, we come to Timber. The song was released October 7 as the lead single from Pitbull’s Meltdown EP, and it features Ke$ha. The harmonica in this song grants it a sort of folksy charm, but the strong beat and vocals provided by the two artists make Timber the slam dunk that it is. It’s hard to stay in a bad mood while listening to this song, even if you are fighting the post-holiday blues. Play this track and you’ll be ready to get your workout on.

Next up is the perfect song to wake you up for your morning workout. Avicii’s Wake Me Up was released on June 17 and has enjoyed serious popularity ever since, even as it competed with an onslaught of new albums also marking their debut in the summer months.

Swedish DJ and producer Avicii has been a fan favorite for a while now, especially since the release of Levels, and he does it again with Wake Me Up, featuring a mashup of vocals from American soul singer Aloe Blacc and acoustic guitar from Incubus’ Mike Einziger. It’s hard not to get moving when you hear this feel-good tune.

Ellie Goulding will help you burn some calories with this punchy 2013 hit. The track is now known as one of Goulding’s most radio-friendly songs and trust us, it’s gym friendly, too. The quick chorus is the perfect motivator to get your feet moving, providing a solid beat with which to match your strides or reps.

Burn was released just weeks after several other popular tracks hit the airwaves, debuting on July 5, but the song continues to find its way out of speakers on the radio, at parties, and at the gym.

Skipping over to the rock side of things, we come to Bastille, the British alternative rock band that released Pompeii on its debut studio album, Bad Blood. Though the album hit the U.K. in February, it didn’t arrive in the U.S. until October, which is why the band is now enjoying some delayed American recognition.

The funkiness of the tune makes this song a perfect soundtrack for your 2014 fitness regime. It can put some spunk into any playlist.

We’ll finish up with a song that everyone loved this summer and are continuing to love even as we brace ourselves for the depths of winter. Icona Pop’s I Love It can bring out the excited teen girl in just about any listener, and it’s hard to avoid at least bobbing your head to the beat when you hear the catchiness of this tune. Dare we say that Icona Pop could even move you to say running — “I don’t care/I love it”?