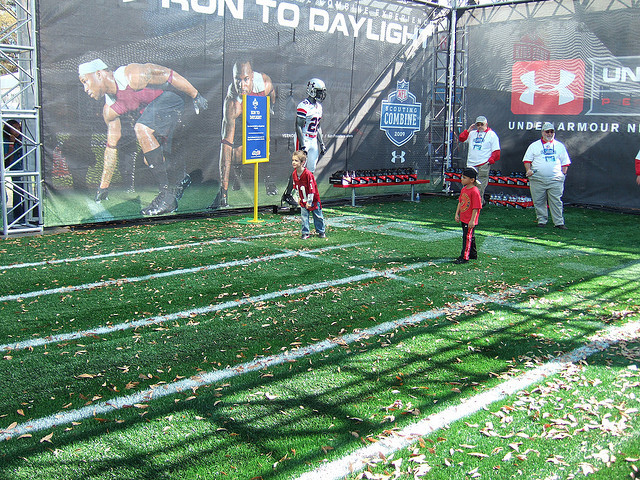 The 40-yard dash: the gold standard for speed in National Football League workouts. An exercise that can boost or diminish a draft prospect’s standings as much as a single round or more, for better or for worse. Darrius Heyward-Bey, now with the Colts and originally with the Oakland Raiders, was a reach when Al Davis grabbed him with the seventh overall pick in the 2009 as the first wide receiver off the board.

Davis’s reasoning? A large part of it had to do with the fact that Heyward-Bey ran a 4.30 at the combine. That time, which would’ve put him in second this year, was the fastest of the 2009 class and caused Heyward-Bey to go before Percy Harvin, Michael Crabtree, Hakeem Nicks, Kenny Britt, and Mike Wallace. Some of those guys have worked out, some haven’t, but all of them would’ve probably been better picks — no disrespect to Heyward-Bay.

When a player like Jadeveon Clowney runs a 4.53 at the combine, it makes scouts sit up and take notice. While his time wouldn’t even qualify for the top 20, he’s the fastest player that’s weighed in at 260-plus pounds since Jimmy Graham — and he’s faster than Graham. That’s terrifying. Here’s a list of 10 prospects who are faster than him and will probably have to use that speed to run away from Clowney in the near future. All data is from the NFL. 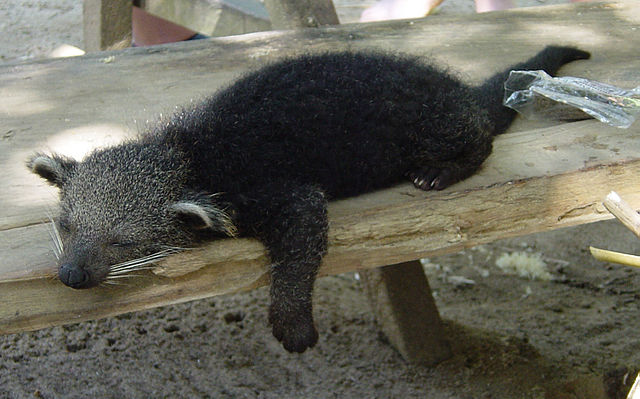 Pictured above is a bearcat. Brandon Dixon is also a bearcat — a Northwest Missouri State University Bearcat. Dixon, arguably the best cornerback in Division II football, was a fringe prospect coming into the combine, but a solid showing (as well as a really fast 40) could have him creeping up into the sixth round instead of being an undrafted free agent.

According to CBS, Dixon stands as the 37th best cornerback in the draft. We know for sure he’s the fifth fastest. We also know that he’s a third-team All-American and recorded five interceptions and 38 tackles in 2012. He also has a brother named Brian, who is also a defensive back at NMSU. Together, they make drill videos set to really intense music.

But that’s kind of it. Speaking to the Kansas City Star, talent evaluator Eric Galko described Dixon as “a guy teams are gonna want to develop. For those small-school guys, if you can play well in the games you’re supposed to against the big competition and you can catch well, teams are always gonna take a chance on [you].” Dixon’s team is the defending Division II champ, but that doesn’t mean a whole lot when it’s being translated to the NFL. Hopefully some team takes a chance on him and we get to see what he’s made of — not to mention some better photos. (Isn’t that bearcat adorable, though?) 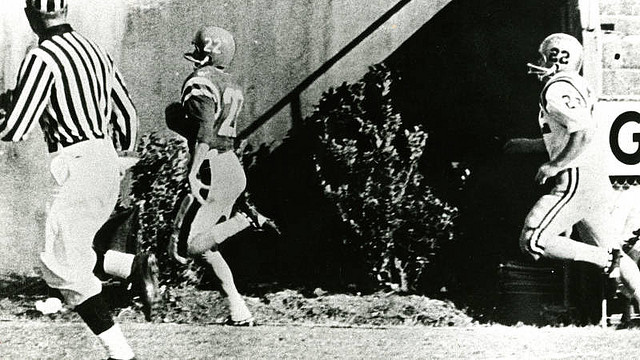 The first tie on this list. Richardson, from the University of Colorado, and Moncrief, hailing from the Ole Miss Rebels, ended up with identical 40 times. Moncrief, standing 6-foot-2 and weighing in at 221 pounds, finished his career at Ole Miss as the college’s third all-time receptions leader (156), receiving yards/touchdowns (2,371 and 20), and second-most 100-yard games, with nine. A projected third- or fourth-round pick, Moncrief’s speed and height will help him go early in what many are calling the deepest wide receiver class ever. While he can assuredly clean up his route running and his adherence to the play calling, his athleticism can’t be taught. Check out this 2013 highlight reel to see him at his best.

For his part, Richardson was no collegiate slouch, either. With several spots of his own on the University of Colorado’s all-time lists (second in touchdowns, third in receptions, fifth in receiving yards), the 6-foot-tall, 175-pound wideout is not quite as raw of a product as his 40-yard-dash buddy, and his expected draft stock reflects this — Richardson should be gone by the fourth round. In case it sounds like Paul’s getting short-shifted on the verbiage, it’s only because his 2013 highlights are a must-watch, and we’re trying to save space for ‘em:

Bradley Roby is a guy who has some “character” concerns. Sometimes in the NFL, these things are overblown and ridiculous — if a guy is smashing his brain into dirt, who cares if he’s not the nicest person? — but in the wake of the Aaron Hernandez debacle, teams are taking any kind of extracurricular application of advanced muscle mass with several more grains of salt than usual. The story, according to ESPN, is that Roby was involved with an altercation at a bar with a bouncer. He got suspended for one game and was originally charged with battery, though the charge was later lowered to disorderly conduct.

Roby, a likely second-round pick, could have put more distance between him and his competition with a faster time. Before the draft, Roby had been ranked by CBS as the fifth best corner in the 2014 draft. At the combine, he was the fourth fastest in the position, having been just barely outrun by the next two players on this list. 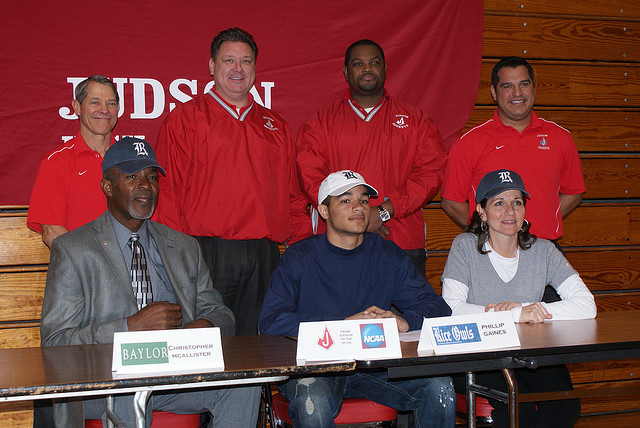 Gaines, pictured above, spent his college tenure with Rice University. A prospect more ready for zone coverage than man, the fact that Gaines is projected to go in the later rounds, where the focus is more on player development rather than instant impact, doesn’t do justice to the fact that he’s really, really, fast. Standing 6 feet tall and weighing in at under 200 pounds, Gaines “also hit over 10 feet in the broad jump and posted a 36 1/2-inch vertical,” according to Sports Illustrated, which quoted analyst Mike Mayock as saying  there wouldn’t be a better value at the end of the draft.

On the other end of the spectrum sits Jason Verrett, a corner out of Texas Christian University who was already in the conversation for a first-round pick thanks to game tape so good NFL.com called it “flawless.” High praise and a great showing in the 40 (as well as the rest of the combine), Verrett may have cemented his first-round status. Also, that game tape? Check some of it out right here: 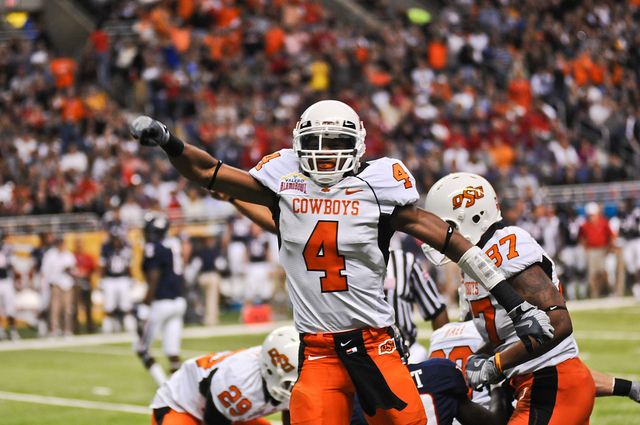 All hail Oklahoma State Cowboy Justin Gilbert, the fastest cornerback of the 2014 NFL Combine. The first-team Big-12, second-team All-American stands 6 feet tall and weighs in at just more than 200 pounds. He’s also fast — real fas — with athleticism and field vision that can allow him to be a versatile threat in multiple positions. He returned six kickoffs for touchdowns in 2013.

While Gilbert gets the peanut gallery knock for coasting on his athletic ability (which he won’t be able to do in the NFL) and his immaturity, no one’s questioning his talent. And along with his 40 time, that talent should definitely see him taken in the first round. There has been no word if his returning skills will be utilized in the pros.

Above is a micro-documentary on Brown from 2012, well before he declared for the draft and before his 2013 season saw him crowned the MIAA Special Teams Player of the Year, as well as first team All-MIAA Wide receiver and kick returner. Brown, a little undersized for a wide receiver at 5-foot-10 and 179 pounds, came into the NCAA on the heels of a tragedy. Luckily for him and fans of football, the wideout seems to have channeled that adversity in a positive manner, posting a blistering 40-yard time of 4.34 seconds.

How fast is that? Well, let’s look at another pair of smallish wide receivers who are deadly on the kick return. What about Devin Hester of the Chicago Bears? He ran a 4.41. Or DeSean Jackson? He’s fast, right? Jackson ran a 4.35, just a hundredth of a second slower than Brown. John Brown is fast. Check out the video below — it’s a fan-shot clip of one of his punt returns.

Sure, that’s a DII game, but there’s no way that’s DII speed. While Brown was expected to go undrafted before the combine, a strong performance may have moved him into the later rounds of the 2014 draft.

Much of the “winning” that goes on at the draft combine is theoretical — changing draft position, getting to demonstrate your abilities in a neutral environment — or simply immeasurable. Being the fastest wide receiver at the combine is kind of like having the highest SAT score in your class: It means very little once you’ve made the jump to the next step.

For Brandin Cooks, however, there were about a hundred thousand reasons to be excited about doing well at the combine. Before the event, Addidas, in an effort to promote its new 5-Star cleat, had offered a $100,000 prize to the athlete that ran the fastest 40 wearing the shoe. Not a bad way to line your coffers on your way to an NFL job.

Cooks, 5-foot-10 and 186 pounds, won the Biletnikoff Award as the nation’s top receiver in 2013, as well as being first-team All-American and first-team Pac-12. He is also the Pac-12 single-season record holder for receiving yards (1,730) and receptions (128). We have him listed in the top five for the wide receivers class this year and compared him to Steve Smith, who ran a 4.39 back in the day.

The second-fastest time ever, just .02 seconds behind Chris Johnson — aka CJ2k (in reference to his 2,000-yard campaign in 2010) or CJ2YPC (in reference to how abruptly he fell back to earth in 2011) — belongs to Kent State’s Dri Archer, a running back who wasn’t expected to be in the conversation at all before the combine (CBS has him listed as going in the seventh round or undrafted), Archer’s speed is going to force NFL front offices to give him a second look.

A 40 time like that demands attention, especially from the record holder himself: