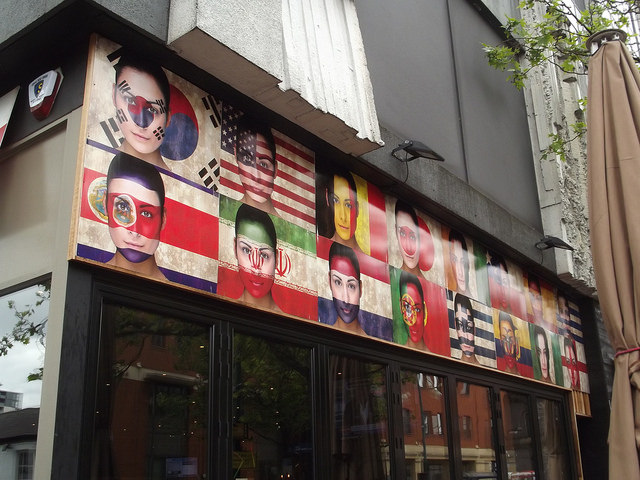 Clint Dempsey fired off a goal at the minute mark, but the U.S. Men’s National Team’s victory against Ghana would come from a reserve. Specifically, a header from John Brooks, Jr., a German-born player who spends his professional life playing defender for Hertha BSC in the Bundesliga when the Cup isn’t happening, at the 86-minute mark. Brooks, who had checked in as an injury replacement, had reportedly told his teammates that he would score in the 80th minute of the match and that they would wind up prevailing. No one is going to chide his dream’s six minutes of inaccuracy. Not when it means a win over Ghana.

Ghana, the English-speaking West African country, has turned into the United States’ personal nemesis over the last eight years, as they’ve successfully handed the USMNT an early trip back home in the last two World Cups, 2006 and 2010. For whatever reason, Ghana has had our number, and as soon as the group was drawn, they drew some serious attention from pundits and fans — in a group that included the objectively better Germany and Portugal.

You can watch the goal here, courtesy of ESPN. In the meantime, we’ve been trawling the Web for the best reactions to Brooks’s goal, and we’ve got four excellent reactions ahead for your viewing and reading pleasure.

4. Will Leitch   If you don’t know who Will Leitch is, you might know the website he founded, Deadspin. While it’s been a hot minute since he was actually at the helm of the Gawker sports site, he’s hardly disappeared from the land of scoreboards and athleticism. Nowadays, Leitch writes for Sports On Earth, and his column on Brooks’s goal was, per usual, tremendous.

“I know this is easily mocked. I know the United States beat Ghana — Ghana – and will be lucky to escape the group stage even after this win. I know the U.S. didn’t even play well, that the whole game was spent in a terrified defensive crouch, that if we hadn’t pulled off a fluke-ish goal in the first minute, we’d have spent the whole evening grousing and bouncing our skull off various blunt objects. I know there is still so far to go. I know this is all sort of silly. That doesn’t change the fact that I’m bleeding profusely from the face right now and it is so fantastic.”

There’s not much else to say about this one — in the immediate aftermath of the goal, John Brooks’ Wikipedia page, which was significantly less complete prior to his game winning goal (which is to be expected, we suppose), was upgraded with this patriotic tagline, casting him as “The Greatest american [sic] since Abraham Lincoln.” There are people out there who take the World Cup very seriously, more seriously than they take the sixteenth president of the United States. Remember that the next time you’re told that no one cares about soccer in the U.S.

Ian Darke, also known as the voice behind ESPN’s soccer coverage, was calling the broadcast when the Brooks goal happened. This is when we should reiterate that the U.S. played a terrible game that everyone mostly expected them to lose. Dempsey’s early goal was tremendous, of course, but mostly for the novelty factor, since early goals happen relatively rarely in soccer matches. After that, and especially after the score was evened at the 82-minute mark by André Ayew, the USMNT was doing its best to make everyone feel like Dempsey’s goal was a million lightyears away from the game in front of them.

“It’s John Brooks for the USA! Have they stolen it?” Darke shouted, adding about seventy-five question marks to the end of the sentence. “Quite incredible. He couldn’t even have dreamt that.” Of course, Ian Darke didn’t know what we do.

1. Wherever the Houston Dynamo was

The United States loves soccer even when the World Cup isn’t happening. That’s evidenced, at least in part, by the very existence of the MLS, or Major League Soccer. The Houston Dynamo is an MLS team based in Texas (go figure), and it’s actually one of the more successful teams in the league, with a pair of championships to their name. Suffice it to say, the organization is made up of people who really dig soccer. So much so that they might even call it football, but the jury’s out on that one.

Either way, the Dynamo’s Vine is the only footage that captures the rowdiness associated with soccer in large parts of the globe, and does a great job of erasing the relatively effete reputation associated with the sport in the States. Good job, Houston.