While being a National Football League head coach is a pressure-filled position, perhaps no day is more dreaded to those controlling the X’s and O’s as “Black Monday,” the first day after the end of the regular season, named as such because if a head coach is going to be replaced, he is usually fired on that day.

In the afterglow of New Year’s Day 2014, six NFL head coaching positions are open, with the Washington Redskins, the Detroit Lions, the Minnesota Vikings, the Cleveland Browns, and the Tampa Bay Buccaneers deciding to part ways with their current coaches, while the Houston Texans, without a doubt one of the most disappointing teams of the season, didn’t even wait until the end of the season to move on from Gary Kubiak.

Perhaps it seems gratuitous, but it should be noted that all of those teams safely and securely missed the playoffs. However, there are some coaches who rang in the New Year with the knowledge that they’d be safe: Rex Ryan of the comically inept New York Jets and Jason Garrett of the tragically mediocre Dallas Cowboys were both retained, with Cowboys owner Jerry Jones saying that he liked where Garrett was as a head coach, despite finishing with an 8-8 record for a third consecutive season.

Because the NFL season is so brief and the league has placed such an emphasis on parity that a team’s fortunes can stagger incredibly from season to season — we see you Texans fans already pretending this season was a bad dream — the arguments for and against a given coach are relatively flexible. There’s an argument to be made that there’s no real reason why a coach like Ryan, the face of a Jets team that seems to sit at the center of a constant vortex of negativity, is safe while the coach of the Browns, Black Monday victim Rob Chudzinski, is not.

As the NFL playoff machine begins to rumble and the offseason for the awful continues to take shape, we’ll take a look back at this year’s Black Monday casualties and analyze exactly what the case against their coaching was, and whether they really deserved to join the ranks of the unemployed. 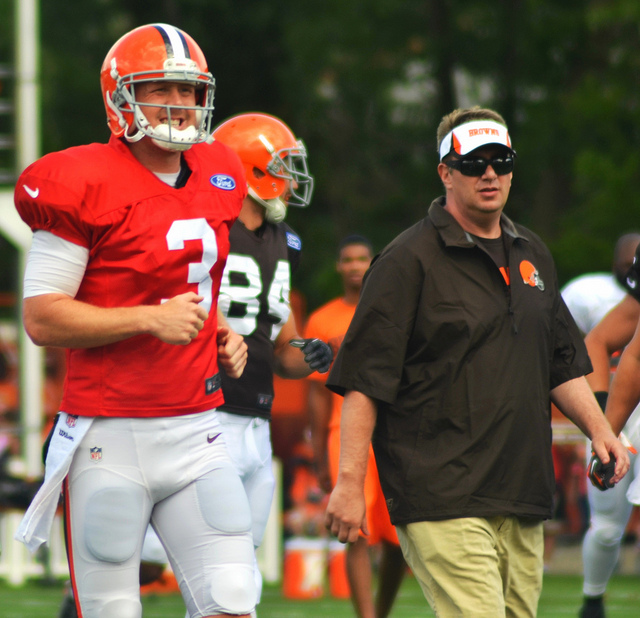 The Browns are no strangers to failure and seem to have the market cornered on the absence of any sort of sports-based luck, even in a hard-up sports town like Cleveland. Because of this, the front office routinely cycles through coaching staff at a breathtaking pace — since 2010, the Browns have fired three coaches, and the newest addition through the revolving door is Rob Chudzinski.

The Chud, as we’ll call him, lasted a lone season in Cleveland, guiding his team to a decidedly loss-heavy 4-12 campaign. According to Browns CEO Jimmy Haslam III, the Chud was let go because the team had failed to show improvement during the regular season. That’s a fine thing to say in a vacuum and in a certain light it makes a lot of sense, but you can’t shine that light on Cleveland.

This was a team that had traded away its best player, Trent Richardson, to the Indianapolis Colts for a first-round pick, a bag of chips, and a soda. That narrative quickly changed when Richardson failed to make a strong impact with his new team, and the Browns came out looking like the clear winners in the trade. That adjustment was tied to the rise of hometown hero Brian Hoyer, who provided a capable hand and a great arm that the team had not found with Brandon Weeden.

Of course, because Cleveland is seemingly bereft of any good fortune in the sports universe, Hoyer tore his ACL after two weeks as a starter, sending the then 3-2 team on a downward spiral at the quarterback position and leaving the Chud hapless and hopeless. With the Browns continuing to add to a decadelong playoff drought and straight seasons of 11-or-more losses, the coaching adjustment was an understandable reaction by a flailing front office destined to right the ship, but a change at head coach probably isn’t going to help this team as much as having a healthy Hoyer for an entire season. Knock on wood, Browns fans. Knock fast and often.

Out of all of the coaches on this list, it’s easiest to argue that the Chud was nothing more than a fall guy, the domino most poised to collapse as the team finished its 2013 season with seven straight losses. A 4-12 record isn’t great, of course, and there’s no compelling evidence that the Chud would’ve gone on to become the next John Madden, but this firing was decidedly unjustified and pretty unfriendly to boot. 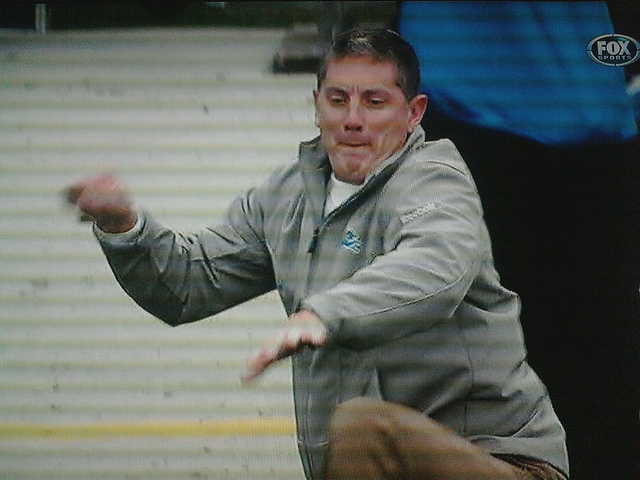 While the Chud was handicapped by how thin his pantry had become, the Detroit Lions’ Jim Schwartz suffered from the opposite problem — an overabundance of talent that feels as though it should be much better together than it has been. With cannon-armed quarterback Matt Stafford; hands-down,-zero-argument best wide receiver in the game Calvin “Megatron” Johnson; and oft-criticized but still crushing defensive tackle Ndamukong Suh — not to mention a rushing attack highlighted by a reinvigorated and catch-happy Reggie Bush — 2013 felt like it would finally be the year the Lions finally made some real noise in the playoffs.

Unfortunately for Schwartz, the Lions found a way to do what they always seem to do: become allergic to wins and implode halfway through the season. After starting with a promising 6-3 record and having all the pieces, Bush especially, thriving in an up-tempo, pass-heavy offense and a decidedly roughneck and possibly overeager defense, the Lions deflated hard and they deflated fast, only winning one game out of the last seven. While injuries accounted for some of the tapering, especially among the receiving corps, the most frustrating-cum-amusing thing about watching the Lions, depending on how you felt about the team, was how inexplicable and unavoidable every collapse was.

In five years as the head coach for the team, Schwartz had steered the ship to an ignoble record of 29-52, causing NFL fans everywhere to weep and lash themselves at the thought of Johnson being marooned in Detroit and out of the deep end of the playoffs for the entirety of his prime. It was a move that was a long time coming, and almost as long overdue. Hopefully, the next Lions coach will make a more exciting meal from all those awesome ingredients.

The newly former head coach of the Minnesota Vikings, Leslie Frazier, had an enviable problem. He was the coach of arguably the best running back in the game, Adrian “All Day” Peterson, an athlete so dominant that he was able to overcome an ACL tear to challenge the NFL’s rushing record a season later. The boons are obvious; the drawbacks are a little harder to see. A player of Peterson’s caliber is going to keep a team from being so bad that it can pick up help with good draft positions and also can sometimes help a team become so good that its flaws are hidden by, say, a 10-6 season and a playoff appearance.

Never mind the fact that the Vikes’ QB, Christian Ponder, is decidedly below par for a playoff quarterback — or the gaping holes in defense. With a player like Peterson, the what-if factor that defines a large part of why the gridiron is so intriguing to so many people has a tendency to cover up a potential problem with the coaching staff, and after a four-year record of 21-32-1, Frazier’s departure will serve as a measuring stick to his effectiveness as a coach.

Not incidentally, Peterson was a firm supporter of Frazier. In fact, several Vikings players seemed remiss about the firing, although acknowledging that the writing was on the wall after reversing from the 10-6 last year to a much more pedestrian 5-10-1, despite how well Frazier was liked in the locker room. The next coach on our list was not so embraced by his players. 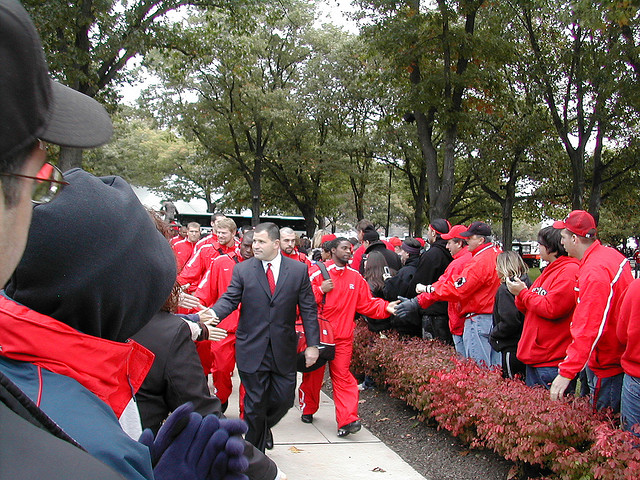 A fan’s relationship with a team is a tricky thing, built on a largely unsubstantiated bit of creative association drawn up by the few factoids that filter from the locker room to the reporters and through the PR machine. It’s why we know Aaron Rodgers is a big fan of growing mustaches and why people think that Chad Johnson — briefly Ochocinco — is a goofy guy. Generally, people think of athletes and players in one-word sentences that don’t often capture the nuance of the individual. We know much less about these fellows than we might suppose.

But it’s pretty safe to say that Greg Schiano, unceremoniously booted out of Tampa Bay after his second season as head coach, could be considered a jerk. Reports began to circle about Schiano’s alleged bad attitude in October, when NFL.com ran a story in which one player who had been involved with the 2012 Bucs compared it to “like being in Cuba,” although he did not clarify whether it was a reference to Guantanamo Bay or just a simile using the notion of a communist dictatorship. That story came at the back end of the month, almost exactly 30 days after a Monday Morning Quarterback piece detailing an “atmosphere of fear and distrust under the current [coaching] regime.”

Schiano would finish his time in Tampa Bay with a record of 11-21, spawning the phrase “Schiano Men,” used by NFL players to describe guys who had played under him while he was coaching at Rutgers and similar in tone to words like “goon.” On the field, Tampa Bay experienced a bit of a cursed season in 2013, having its team facilities ravaged by MRSA (don’t Google it during lunch) and its best players going down with injuries. All told, the Bucs finished 4-12, down from 7-9 the previous year. Parts of that record are owed to things beyond Schiano’s control, but based on the floodgate of info coming from Florida, this was a firing that needed to happen. 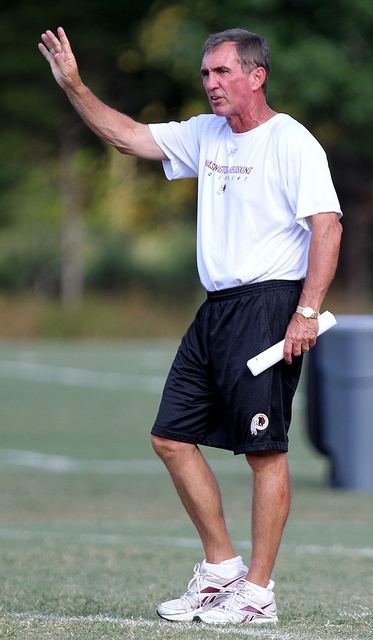 The Robert Griffin III trade, which saw Washington snag the much-hyped rookie out of Baylor in 2012, will be subject to shifting interpretation for years to come. Last season, when Griffin was scrambling and throwing with the best of them, it seemed like a surefire move for the D.C. football team and a disaster for the St. Louis Rams, which were and still are a decidedly OK team that would really benefit from a quarterback that isn’t Sam Bradford.

This year, the ‘Skins limped to a decidedly dismal 3-13 and Griffin never showed the spark he had in spades as a rookie with a slow return from last year’s ACL and LCL injury.

Shanahan, famous for his rotating-committee runningback schemes and other Shanahan-igans, made the decision to leave Griffin in during that fateful Denver-Washington game when the collective hope of D.C. football fans was torn in half along with the young quarterback’s knee ligaments. Later, after Griffin had returned — arguably too early — to play in the season opener, Shanahan was slow to adapt to the new limitations of his quarterback while stifling the use of RGIII’s greatest weapon, his running, in order to protect him.

The caveat being, of course, that Washington’s offensive line desperately needs some shoring up that goes beyond play calling and restraining the read option. Ultimately, the writing was on the wall after Shanahan benched RGIII for Kirk Cousins, because there was no way the front office was going to side with a head coach over a franchise centerpiece.