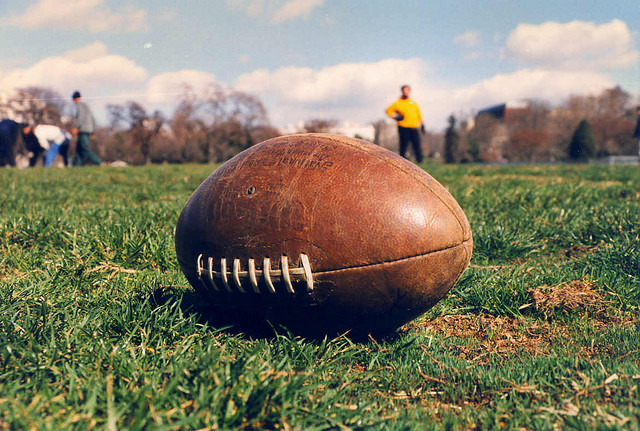 Now that the NFL has officially released the preseason schedule for 2014, it’s time to start separating the wheat from the chaff. Not all football games are created equal, obviously, and never is that more true than in the preseason when the bad teams stay bad and the good teams play bad players. At least, it can sometimes feel that way when the game gets exceptionally sloppy as these can and tend to — after all, the takeaways are rarely reflected in the final score.

Watching the preseason, which begins on August 3, at the height of lack-of-football induced depravity, is a necessary evil. It’s like caring for a relative you can’t particularly stand, something done out of duty, compassion, and the simple fact that by the time the games actually roll around, it’s been almost six months since the Super Bowl. Imagine being unable to order your favorite food for half a year and suddenly coming across a fast-food joint that sells a quick and dirty facsimile.

You’re getting the food. You’re watching the preseason games. But just like too much fast food is bad for you, there’s a pile of preseason games to chose from, and there’s only so much that can be taken in healthily. Here are the seven games that should make for great viewing — aside from all the games featuring your favorite team, of course. 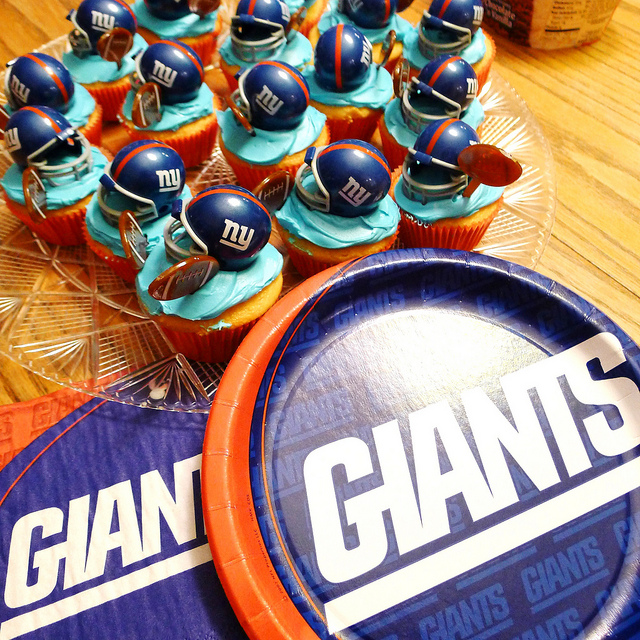 What is the Hall of Fame game? It’s a neutral exhibition game played at Fawcett Stadium, a comparatively tiny (for NFL standards) 22,500 person high school football arena in Canton, Ohio — right next to the Pro Football Hall of Fame. The game is scheduled to be harmonious, and close to the PFHoF induction ceremonies — hence, Hall of Fame game. It’s also going to be nationally broadcast on NBC, unlike a majority of the games, which will be NFL Network viewing.

But what to make of the teams playing in it? We, and everyone else, know the Buffalo Bills have Brandon Spikes, who looks primed to play with a Chip Kelly-sized chip on his shoulder this season. They also lost Jairus Byrd, probably the best safety in this year’s free agent class. That’s what we know about the Bills, aside from their recently deceased owner and the possibility of a sale.

As for the Giants, they’re taking the first step to regaining some form after a disastrous 2013 season that saw them miss the playoffs for the second consecutive year, go under .500 for the first time since 2004, and saw starting quarterback Eli Manning — who has won two Super Bowls – get compared to Mark ‘Buttfumble’ Sanchez. The game will be played on August 3. 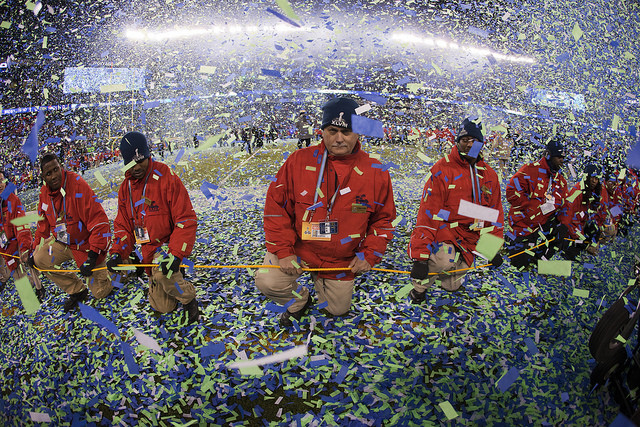 The definitive matchup of the first week of the preseason is a recasting of the last football game anyone watched — Super Bowl 48. That match was, by any measure, a rout.  The NFL has taken some precautions in order to avoid that from happening twice in a row. At least that’s what it looks like by virtue of the Bronco’s being the home team and their mile-high oxygen advantage.

So what’s new for the Seahawks? They lost Golden Tate to Detroit, but they should have a healthy Percy Harvin, so that’s a wash — if not an upgrade. They still have Marshawn Lynch. They still have Russell Wilson. They’re still the same Super Bowl winning Seahawks.

The Broncos, though, have been through a serious facelift. After coming out the gates swinging hard in free agency, the team features a revamped defense that is modeled, although they might deny it out of principle, on the success that Seattle’s D had in the post season. Athletic corners. A hyper-aggressive safety. An angry Peyton Manning. No Eric Decker (he went to the Jets) but, you know, Angry Peyton is more important anyway. 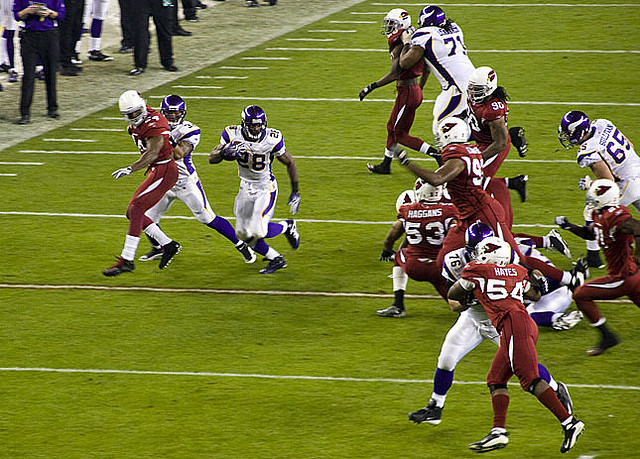 This is one for the fans drawn to schadenfreude — the week one and people who like to watch running backs. With a trio of hyper talented backs in Adrian “All-Day” Peterson, Darren “Run DMC” McFadden, and Maurice “At Least I’m Not Still in Jacksonville” Jones-Drew, the Raiders take on the Vikings in what will be an interesting display of a pair of teams that don’t play very well most of the time.

The Raiders, who were the anti-Broncos in this year’s free agency, are picking fifth overall in the 2014 NFL draft. The Vikings are picking eighth. Both teams desperately need quarterbacks — the Raiders were so empty at that position they went out and signed Matt Schuab, the former Texans QB who all but threw his jersey in the garbage last year, despite the fact that Terrelle Pryor, last year’s rookie, was easily the best thing about the entire Oakland offense.

He ran, so they went out and signed Maurice Jones-Drew and kept Darren McFadden. It’s possible that Oakland goes the entire season without even attempting a single passing play. Vikings fans probably wish that their team would — their quarterback is still Christian Ponder. That’s sad. To cheer everyone up, here’s some AD highlights from his MVP season. 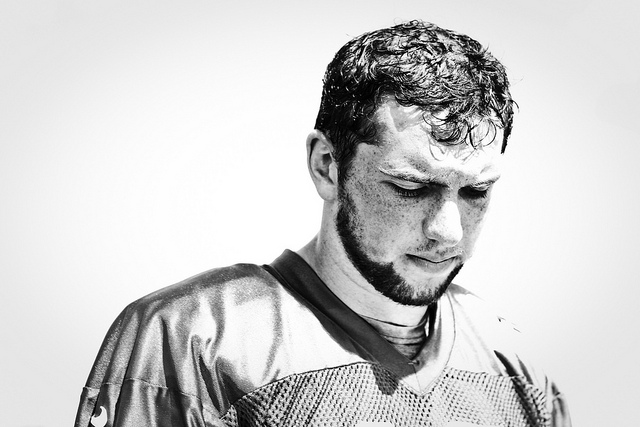 The Saints, who recently lost running back Darren Sproles to some offseason weirdness (he was ultimately traded to the Eagles), still seem to be built around Brees, his arm, Jimmy Graham’s athleticism, and a receiving core who are ready to catch anything. Their transformation on defense under Rex Ryan has been impressive, and their recent signing of Jairus Byrd should only help that.

For the Colts, they’ll be happy to be involved with something that doesn’t involve Jim Irsay and the police. They snagged Hakeem Nicks in the offseason, and have a full kitchen set for offensive chef Andrew Luck (pictured above) to cook with in his third year as the starting quarterback.  “It’s a good problem to have,” head coach Chuck Pagano told the MMQB. “I say problem — there’s only one football.” 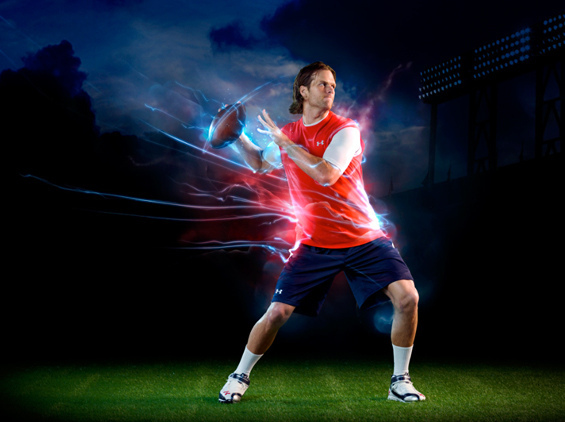 Again, this is the preseason. The junk food of football. Every game is defensible under the bailout card of “yeah, I hate this team when it matters, but right now I can just kind of enjoy it.” Ergo, the Eagles at the Patriots are two of the yuckiest teams in the regular season, but one that has a really fun offense when everyone’s healthy (and no team is healthier, usually, than the preseason.)

That would be the Eagles, of course. While Chip Kelly’s offense has spent a whole year in the NFL, the preseason marks the inclusion of Darren Sproles and the widely publicized departure of DeSean Jackson. Also, Nick Foles taking over the full time starting gig, and the fact that the Eagles always fail to win anything.

The Patriots, on the other hand, lost Brandon Spikes (and their fans got very upset with him later.) They did snag Darrelle Revis, which is awesome, and they ended up keeping Vince Wilfork. They still have Tom Brady, who, as you can see above, is made of lighting. This game is going to be awesome. Full preseason schedule here.