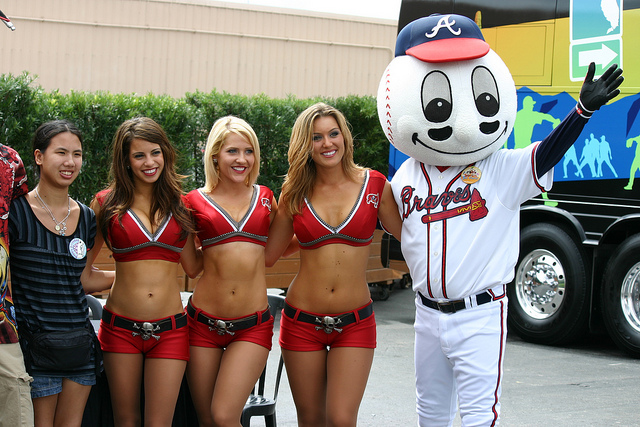 You may have noticed or you may have missed it, but over the last year and change, there have been an increasing amount of lawsuits filed against NFL teams by their cheerleading squads. The role of the cheerleader in professional sports has always been one that’s apt for easy dismissal. Any comments section in any of the stories about these lawsuits runs the usual gamut: ‘eye candy’ is bandied about fairly often, as well as in the insinuation that ‘they knew what they were getting into,’ which is probably incorrect given the available information we have about the way the organizations paid their cheerleaders (very little) and what they demanded from them (much more than very little.)

The job, frankly, doesn’t seem as easy as it appears to be on the surface, a surface that shows a gig based on little more than good genes, a solid workout routine, and the ability to do things more or less at the same time as a handful of other people. It doesn’t count the hours of mandatory, unpaid appearances that are required by the cheerleaders, or the absurd restrictions on appearance, voiced opinion, and public discourse, all while being paid well below the minimum wage (allegedly.) There’s a point — not an entire argument — to be made about whether or not these cheerleaders signed up for this sort of thing or not, but it’s hardly the conversation ender that its supporters believe it to be.

So, without any more exposition, here are the five NFL teams that have been sued by members of their cheerleading staff. That’s almost a fifth of the league, so it’s not as if it can be chalked up to an isolated incident, especially when you read some of the teams’ guidelines for their cheerleaders (we’ve got them embedded where they’ve appeared publicly.) 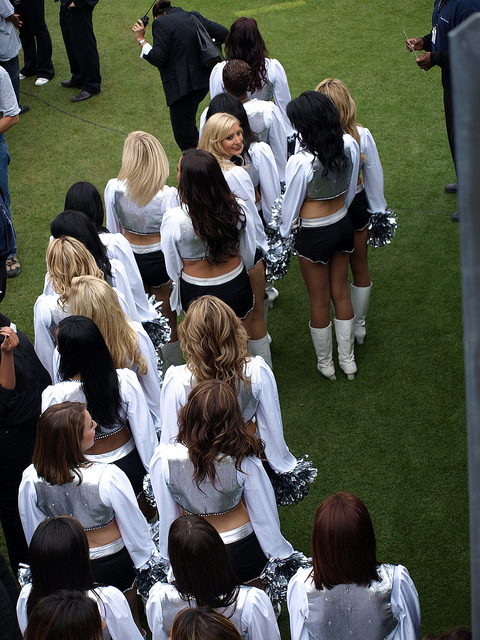 The Raiders have actually been sued twice by cheerleaders they’ve employed, and the Oakland franchise allegedly paid the first group less than five dollars an hour — after the extra time factored into rehearsal, practice, and appearances. The costs of which, largely, were not covered by the team. “The club controls our hairstyle and makeup, and we have to foot the bill,” a cheerleader named Lacy T (per the lawsuit) said, according to ESPN. “We also have to pay the costs for traveling to all kinds of events, including photo shoots.” After detailing how much she enjoyed the Raiders and her position as a cheerleader, Lacy made it clear that this lawsuit was about the unfair employment practices on behalf of all NFL cheerleaders — this was, you may have gathered, the first of the lawsuit to be filed.

The second suit was more blunt, as it detailed how the Raiders cheerleaders “were forced to change into uniform in public places, were groped by inebriated men, and could be benched from games without pay if they did not meet certain weight and fitness requirements,” per ESPN. There are PDFs of other football teams’ weight and fitness requirements later on in the article so you can get an idea of what the average NFL team requires of their cheerleaders.

The face of the Tampa Bay suit, Manouchcar Pierre-Val, would probably be envious of the Raiders pay, as her lawyers allege that the Bucs cheerleader made less than two dollars an hour, far less than even the federal minimum wage. While Pierre-Val was being paid $100 per game, her legal representation points out that she, as well as the other Tampa Bay cheerleaders, “were required to attend multiple practices per week, be at the stadium all day on game days, and attend at least 40 hours of events for nonprofits throughout the season,” all of which would be unrecognized, financially speaking. 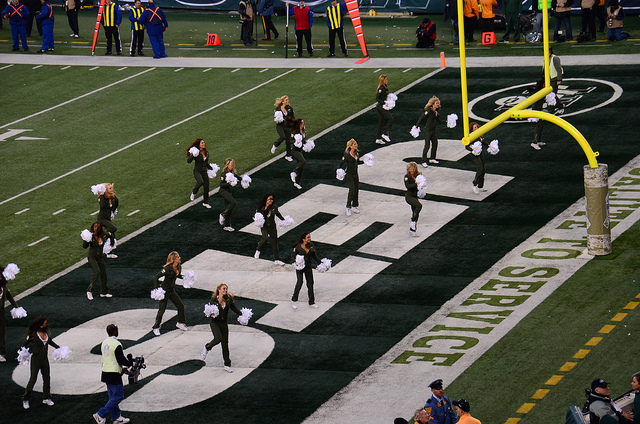 Compared to some of the other teams, the New York Jets’ cheerleaders are raking in a ton of cash — $150 per game and $100 per ‘special event,’ according to the New York Post, but that still works out to under four dollars an hour, well under the minimum wage for New York or New Jersey (where the Jets play.) The main plaintiff in the suit, listed as Krystal C, was a Flight Girl — what the Jets’ cheerleaders are officially called, as other NFL teams with similarly hideous names for their cheerleaders are: the Raidettes, the Ben-Gals, the Buffalo Jills, and the Carolina Topcats, although many teams have moved on to call them simply ‘cheerleaders’ — from June 2012 to December of 2013. She told the Post that, as professional dancers, cheerleaders should be compensated accordingly.

Here, at last, is some concrete proof of the absurd. When one of the Ben-Gals filed suit against the team for the same reasons as the other cases (essentially wrongful wage withholding), the Cincinnati guide book for what was good and what was not for Ben-Gals leaked. Some of the directives are defensible, but some of them, like “no slouching breasts[,] support as needed” and a “three-pound leniency” on your “ideal weight,” are laughably absurd. The full thing is below. 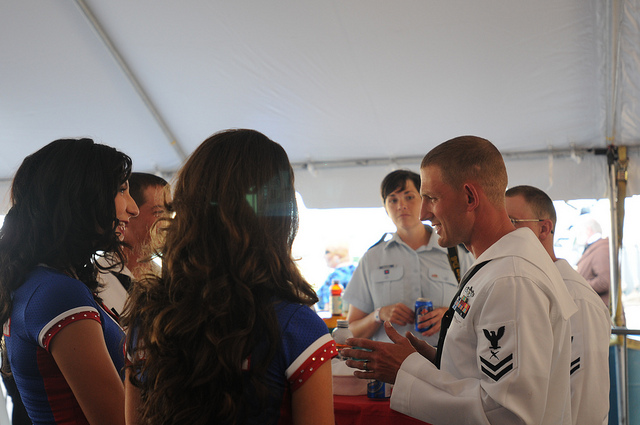 The Ben-Gals’ handbook, though, is significantly less dictatorial than the one that governs the Buffalo Jills. The full thing is below, but when five former Jills lawyered up to fight for unpaid wages and mistreatment, we found out exactly how nuts the situation can be. In addition to offering a comprehensive guideline as to how those cheerleaders with “physique challenges” can expect to be visited by The Director, who, along with the Jills’ management, conducts “a visual evaluation the Tuesday prior to every home game” and uses the results to determine which cheerleaders are brought to the game and which ones aren’t. Seriously.

That’s got nothing on how hilarious/awful their mandates on glamor, hygiene, dining, and converstations are, though. Remember, Jills “always avoid strong opinions.” Check it out below. The Bills are currently trying to get the lawsuit dismissed, per ESPN.