Since trading for point guard Rajon Rondo back in December, the Dallas Mavericks have been playing some of the best ball in the NBA. Although they currently sit in fifth in the ultra-competitive Western Conference, they are only a mere three games behind the first place Golden State Warriors.

Sitting at 25-10, riding a five-game winning streak, and 8-2 record in their last 10, the Mavericks are starting to make a case for the best of the West. They have all the components of a bona fide contender. In Dirk (we trust), the Mavs have a go-to scorer with a history of clutch performances. They also have a tough-as-nails rim protector who makes interior scoring very difficult for opponents. And now, throw in an elite, pure point guard with long arms and an ability to defend, and that spells trouble for the rest of the NBA. But, of course, they have much more going for them out in Dallas.

Therefore, let’s look at 5 reasons to fear the Mavericks out West.

All statistics are via Basketball-Reference.com and ESPN.go.com

Ever since the December acquisition of point guard Rajon Rondo, the Dallas Mavericks have started to look the part of a championship-caliber team. Adding Rondo, and his 9.9 assists per game to an already formidable bunch has helped the team win six of their last eight games, and they seem to be building chemistry faster than anyone expected. Folks are even beginning to think that Dallas might have the most talented starting lineup in the NBA. If you take a look at the starting five above, it’s hard to argue with them.

Both Dirk Nowitzki and Tyson Chandler won a championship in Dallas back in 2011. Rondo has two Finals appearances and a title under his belt from his time with the Boston Celtics. For those who believe that experience doesn’t matter in this league, one only needs to look at the struggling Cleveland Cavaliers as a prime example to refute this notion. Also, given their consistently winning ways, does anyone ever think the San Antonio Spurs don’t have a chance? The Mavericks now bolster a starting lineup featuring three members who’ve celebrated success with a parade. That kind of experience will pay dividends come playoff time.

The NBA season is a grueling 82 games with constant travel, minimal rest, and plenty of back-to-backs. It doesn’t matter what kind of shape you’re in, it always helps to have reliable reserves at your disposal. The Dallas Mavericks are sound in that respect. They have 12 players who average at least double-digits minutes-per-game, and have nine players who contribute at least 7.3 points-per-game each night. Not to mention that the scoring among the starters is extremely balanced, with Monta Ellis averaging the most at 20.7 points-per-game. Point being, the Dallas Mavericks have a lot of weapons.

4. Coaching counts for something

Ask anyone who knows anything about basketball, and they’ll tell you that Rick Carlisle is one of the best coaches in the NBA. As head coach of the Detroit Pistons, Carlisle won coach of the year during the 2001-2002 season. He also led the Mavericks to the NBA title in 2011, where they knocked off the heavily favored Miami Heat (LeBron James, Dwyane Wade, and Chris Bosh’s first season together). He is smart, effective, and accomplished. Having Rick Carlisle in charge of the X’s and O’s only bolsters the stock of the Dallas Mavericks. 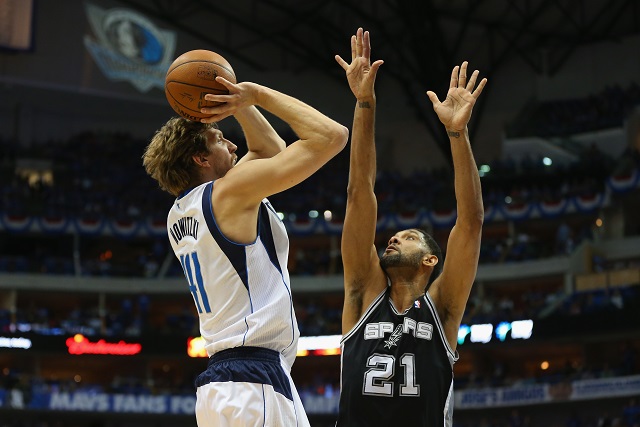 The numbers don’t always tell the whole story. But, in this case, they paint a pretty good picture of how solid the Mavericks are offensively:

The name of the game is “put the ball in the basket.” And no one in the NBA does it as effectively as the Dallas Mavericks. They are among the best in the NBA in nearly every offensive category, and have the second best overall team rating. If they maintain this level of production, the Mavericks, and the city of Dallas, might get to experience their first parade since 2011.