The baseball world is still reeling after the flurry of activity before the 2014 MLB trade deadline. For the Boston Red Sox, it was a time to stock up on position players and settle issues they had on and off the field, which came at the expense of the team’s starting rotation. Red Sox management traded Jon Lester, John Lackey, Jake Peavy, and Felix Doubront within a week’s time.

While Yoenis Cespedes was the prize of the many deals the Red Sox made, the team will have to depend on available free agents (possibly Jon Lester himself) to build a team for 2015. Boston still ends up with an improved lineup and infield for 2015. After so many deals, here’s what the Red Sox actually have left.

Signing big-ticket free agents often comes at the expense of first-round draft picks, which is why the Yankees have so much trouble developing young talent. The exception is when teams finish with one of the ten worst records in the league. Since the Red Sox start play on August 1 with the seventh worst record, it’s safe to guess they won’t leapfrog many teams with the squad they have on the field.

Playing poor baseball for the rest of 2014 will have some rewards in this respect. Red Sox management can target a big-ticket pitcher on the free agent market without worrying about the impact on draft picks. This approach allowed them to resign Stephen Drew (admittedly, a bust) without losing any future picks. They could even resign Jon Lester.

2. A powerful middle of the order

Yoenis Cespedes, the best player the Red Sox received in their deadline trades, can hit the ball out of any park. At Fenway, it’s easy to imagine the two-time Home Run Derby winner powering the ball over the Green Monster on a regular basis. Cespedes is signed through 2015 at a very reasonable salary, which gives the Red Sox a formidable middle of the order with Mike Napoli and David Ortiz flanking Cespedes in the lineup. Allen Craig is also joining the team via the Lackey trade.

Despite his 2014 struggles, Craig was a high-average hitter for St. Louis over the previous two seasons. At dead last in the American League in runs scored and twelfth of fifteen in batting average, the Red Sox need all the offensive production they can get. 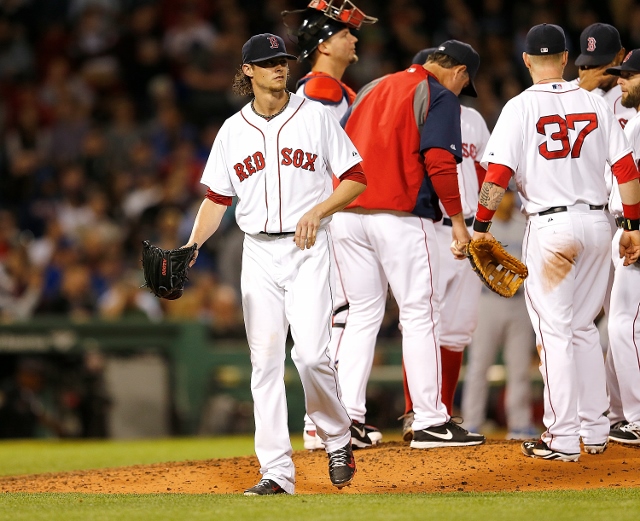 3. A rotation with Clay Buchholz at No. 1

An obvious ngeative in the Red Sox trades was the gutting of the starting rotation. While Felix Doubront (2-4, 6.07 ERA) and Jake Peavy (1-10, 4.71 ERA) were not offering much from the mound, Jon Lester (2.52 ERA, 1.12 WHIP) and John Lackey (11-7, 3.60 ERA) were the team’s best starters by a mile. The four subtractions leave the team with youngsters Rubby De La Rosa, Brandon Workman, and Joe Kelly (acquired for Lackey) in the rotation.

Clay Buchholz (5-7, 5.87 ERA) is the team’s No. 1 starter at this point, which is indeed a scary thought. Hitters are batting a robust .299 off Buchholz in a year when averages are down across both leagues. For the team to contend on any level in 2015, major upgrades are necessary for the pitching staff.

4. A solution to the Xander Bogaerts situation

Red Sox management did the team a disservice in multiple ways by acquiring Stephen Drew (.176 BA, .255 OBP) on June 2. Drew displaced Xander Bogaerts, the team’s shortstop of the future, who was forced to man third base. That move likely caused the slump Bogaerts suffered shortly thereafter. After hitting .296 with a .389 OBP at shortstop, Bogaerts hit .182 with a putrid .217 OBP over 44 games at third base. Returning to short should help Bogaerts’s confidence and allow him to raise his comfort level at the plate.

5. Questions about the defensive alignment

New Red Sock Allen Craig plays the corner outfield positions and first base. Since Mike Napoli’s on first and Yoenis Cespedes will join Shane Victorino, Brock Holt, Daniel Nava, and Mike Carp in the outfield, it’s not immediately clear where Craig will play in the field. Cespedes makes sense in Fenway’s spacious right, while Craig is intially expected to play left.

Having too many players is usually a sign a trade is down the road, so Red Sox GM Ben Cherington has ammunition if he wants to fire away on trades in the offseason. For now, the Red Sox have the Yoenis Cespedes show to enjoy for the rest of the season and 2015.

Another silver lining is the Red Sox part ways with John Lackey, who didn’t exactly set a new standard for class among baseball players. As one of the prime movers of the Chicken and Beer Debacle, Lackey represented a brand of baseball that had its downside. The Red Sox now can put that dark era of the team’s history to bed.