On January 1, the Detroit Red Wings faced off against the Toronto Maple Leafs in the National Hockey League’s annual outdoor game. Ever since the inaugural match in 2008, the Winter Classic has become a staple on New Year’s day. But outdoor hockey has been played for much longer than five years, whether it’s with friends on a local pond, kids playing on their frozen backyard, or a televised game in front of thousands of people.

Every season, the Winter Classic rotates outdoor venues. This year, it was held at Michigan Stadium in Ann Arbor, Michigan, with hopes of setting the Guinness Book of World Records tally for most people attending an outdoor hockey game. While the number of tickets sold — 105,491, according to the NHL — for the 2014 Winter Classic posits that game as the new world record, the actual number is determined by tickets scanned into the stadium, which takes about a month to establish.

Hockey traditionalists see outdoor games as the sport going back its roots. And the events really do bring out everything that’s pure about hockey, all at once: the cold temperatures, the grittiness, and, as this list will show, the inclement weather that comes with the unknown. Barring the pending Winter Classic attendance results, here are the six biggest outdoor hockey games to ever be played.

[Note: Games pictured may not match the game listed.] 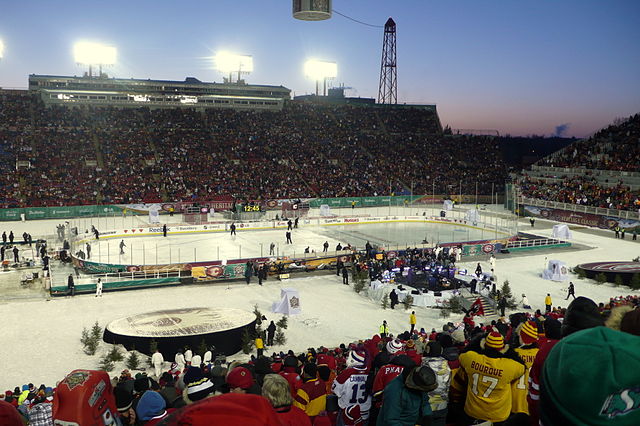 The only game on this list to take place in Canada, the 2003 Heritage Classic was a battle between two Canadian NHL teams, the Edmonton Oilers and Montreal Canadiens. Attendance came in at 57,167, and this game at Commonwealth Stadium in Edmonton, Alberta, was the first official NHL game played outdoors as part of the regular season. Given the tagline “A November to Remember,” the Canadiens went on to defeat the Oilers, 4-3, despite November temperatures of minus 22 degrees Fahrenheit with wind chill. Though the Heritage Classic wasn’t a huge publicity event for the NHL at the time, it paved the way for the Winter Classic tradition that’s taken place every year since 2008. 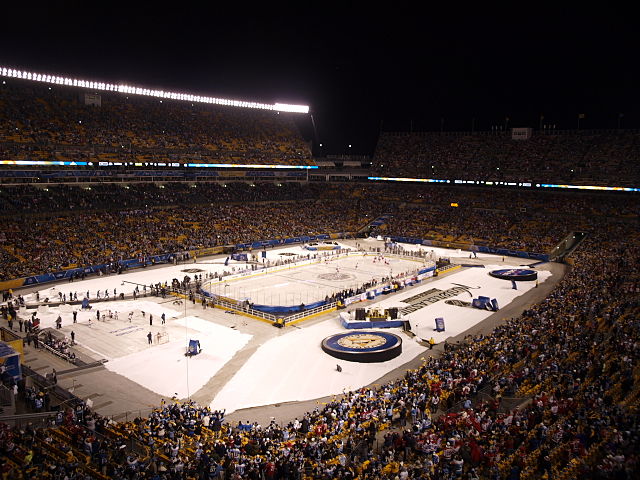 Taking place at Heinz Field, home of the Pittsburgh Steelers, this game between the Washington Capitals and Pittsburgh Penguins had an attendance of 68,111. The game notched two former No. 1 draft picks against each other in Sidney Crosby and Alexander Ovechkin.

Unlike the Heritage Classic’s freezing temperatures, it was around 40 degrees and raining on game day, inducing fear that the rink would be too slushy to play. Fortunately, after pushing back the start time by seven hours and continuous rink maintenance, the game was played — albeit a bit sloppily — and fans were able to enjoy an outdoor game without the freezing temperatures that normally accompany it. 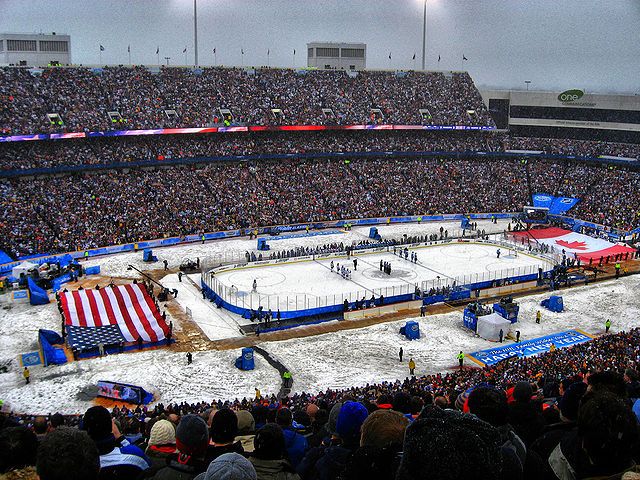 The inaugural game in what has become a tradition, the 2008 Winter Classic didn’t fail to disappoint. Fans flocked from all over — 71,217, to be exact — to Ralph Wilson Stadium in Orchard Park, New York, to watch the Buffalo Sabres face off against the Pittsburgh Penguins. As previously noted, the event was modeled after the Heritage Classic, and considering the NHL was unsure about how the idea of an outdoor game on New Year’s day would be received by fans, it became an instant success.

At the time, the 2008 Winter Classic set the NHL attendance record. The teams struggled early, which left the score tied, 1-1, for three periods, ultimately forcing a shootout. While the hometown Sabres struck first in the shootout, the Penguins scored on their remaining two chances to claim victory. 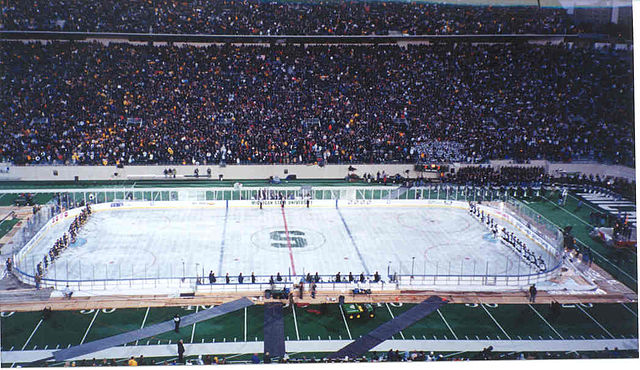 In a name only fitting for the University of Michigan-Michigan State University hockey rivalry, this battle between the two rivals in 2001 helped set off the wave of outdoor hockey games in the United States. Though it took place in early October and risked warm temperatures, Michigan State set up the rink on their football stadium and fans piled in to see the contest. At the time, the 74, 554 viewers set a world record that would remain until 2010.

Another reason the hockey Cold War helped launch various other outdoor games was not just because of the unique following, but also the quality of the game. The Spartans, trailing by one late in the game, rallied for two third-period goals to tie the game at three apiece in a riveting ending. 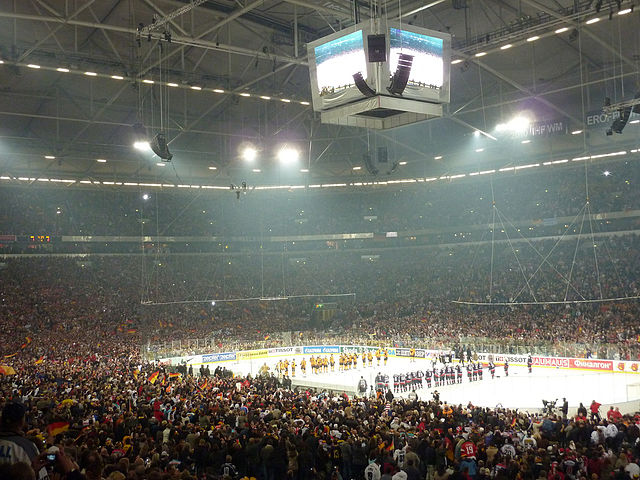 Taking place in Germany, this annual international hockey tournament boasted some of the best hockey in the world. Though there were many great games throughout the event, the opening round match between the United States and Germany at the Veltins Arena in Gelsenkirchen brought in an impressive 77,803 people despite being just a preliminary game. With hopes of surpassing the record set by Michigan and Michigan State the Cold War, the IIHF configured the stadium to increase the capacity.

This game at Veltins Arena may have fallen short of the world record, but it set Germany’s attendance record en route to giving the German national team an advantage against the favored Americans. The home advantage proved useful, as Germany defeated the United States by a score of 2-1, the first time they’d defeated the Americans since 1993. 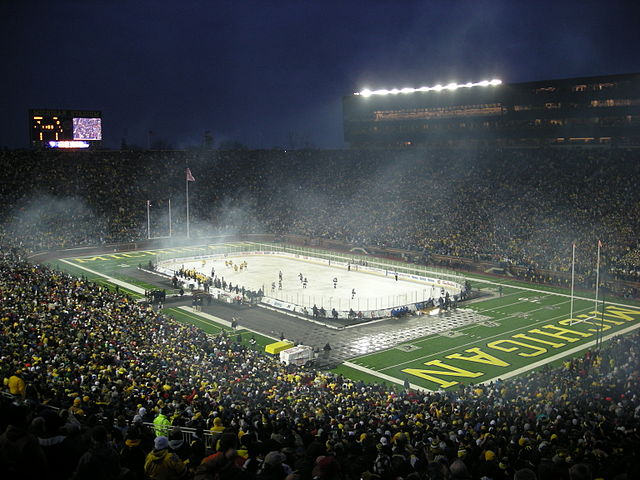 Coming in at No. 1 is the second outdoor matchup between Michigan and Michigan State, in 2011. After the success of the Cold War, both teams felt it would be wise to have a 10-year anniversary outdoor game between the hockey powerhouses. Instead of playing in East Lansing, they moved the game to Ann Arbor’s Michigan Stadium — the “Big House” — where the capacity is a little more than 109,000.

Initial attendance was announced at 113, 411, but similarly to this year’s Winter Classic, that number was based on tickets sold and not tickets scanned. The Guinness Book of World Records later certified the exact number at 104,173, more than 25,000 people than the next most-attended event. The success of the Big Chill prompted the NHL to move the Winter Classic to the university’s stadium this year, despite it not being a professional venue.

The game itself and not just the Big House ensured that the Big Chill was a success. The University of Michigan athletic department brought out all the bells and whistles, including fireworks for each goal scored and a pre-game military flyover. The Wolverines defeated the Spartans, 5-0, and the game’s popularity established future collegiate outdoor hockey games.