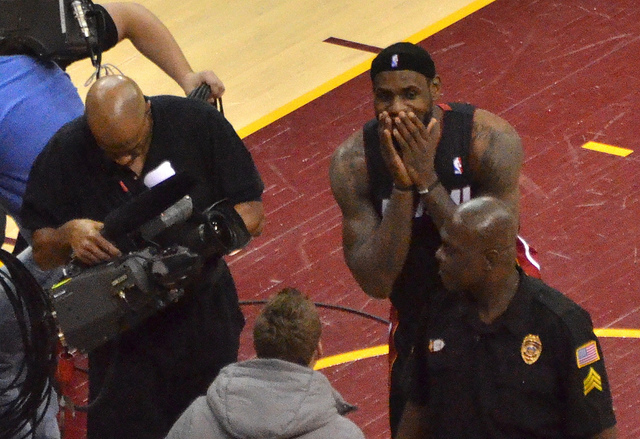 As the National Basketball Association season winds down, it seems the battle for the league’s premier individual award has only just begun. Though some feel Oklahoma City’s Kevin Durant is a shoo-in for the award — ESPN First Take’s Stephen A. Smith said Durant would have to fall on his face to lose it — others disagree. Namely LeBron James, who has turned up the heat late in the season to make his case stronger than ever that the fight for MVP isn’t over just yet.

Here are six times LeBron made it clear he wants to be MVP.

1. The month of February was a strong one for James, despite his being sidelined — albeit briefly — with a broken nose. James shot .575 from the field, becoming only the second player after Wilt Chamberlain to average at least 30 points, 8 rebounds and 6 assists while shooting at least .570 for a calendar month. Not too shabby.

2. With partner Dwyane Wade sidelined, James recently netted a career high and franchise record 61-point game against the Charlotte Bobcats. James went 22 of 33 from the field, giving him the highest field-goal percentage (66.7) in a 60-point game since Shaquille O’Neal had 61 points on 68.6 percent shooting in 2000. “Once you get into a zone, you feel like you’re shooting a golf ball into the ocean,” James said during a post-game news conference.

Man all I can say is What a Night!! #StriveForGreatness #WitnessHistory http://t.co/DzhmY73bKn

4. Instead of shying away from outright claims, talk of Durant as MVP seems to have finally baited James into saying what he thinks. James, facing immense pressure to three-peat with the Heat, even went so far as to say that real pressure won’t shift to Durant and the Oklahoma City Thunder until after he’s gone. “When I retire,” James said. “When I retire. They’re still talking about, am I going to win a third? You know.”

5. After receiving flak for saying his NBA Mount Rushmore would include Michael Jordan, Magic Johnson, Larry Bird, and Oscar Robertson — and adding that he could eventually carve a place for himself — James shrugged off criticisms from veterans and current league players, offering this response: “No one can still guard me one-on-one.”

6. Though conceding that guarding Durant in a one-on-one game would be tough — “It’s already tough enough trying to guard him … with four other guys trying to help” — James picked himself to win in a matchup. “I’m not going to ever count myself out,” he told NBA.com’s David Aldridge.