The National Basketball Association’s pre-draft combine begins this week in Chicago, with participants expected to be analyzed in a variety of on- and off-court manners. Among other things, players undergo full physicals, do athletic testing, and perform individual drills before a league-wide gathering of scouts and coaches. The combine is also the first place where teams have an opportunity to meet face-to-face with players.

Recently, it was announced that top prospects Andrew Wiggins, Jabari Parker, and Joel Embiid would all be skipping the combine. In this way, some analysts say, the trio are able to dictate their own process, choosing which teams they’d like to work out for and undergo medical testing with.

Though the lack of combine exposure is unlikely to seriously hurt Wiggins, Parker, or Embiid, it could significantly help participating players forge connections with teams and move their way up the draft board. Read on as we break down the top eight players most likely to be taken first in this year’s draft, in no particular order. 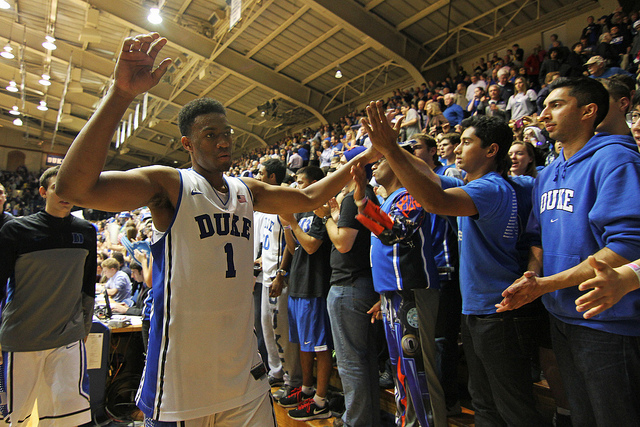 The son of former Chicago legend and NBA player Sonny Parker, Jabari is a polished offensive player who, as a 6-foot-8 forward, averaged 19.1 points and 8.7 rebounds at Duke. He earned first team All-American honors and also won the Wayman Tisdale Award, given to the nation’s top freshman. Though Duke fans were sad to see him go, Parker has undeniable talent and will be a meaningful addition to any team. The best part? Parker is still growing – literally and figuratively. Said Duke coach Mike Krzyzewski: “When he has the ball, he’s so excited and he can do things you don’t teach. If he learns to play without the ball to the level I think he can, I think he’ll be, in the NBA, a franchise player. I think he’s going to be unbelievable.” 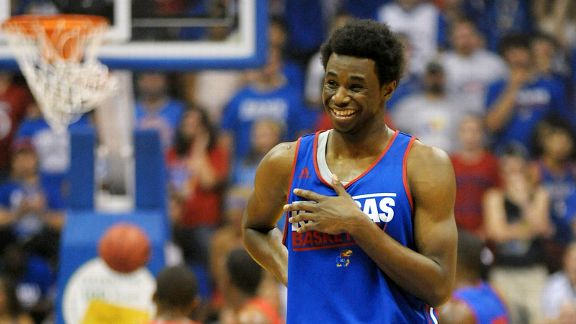 After averaging 17.1 points and 5.9 rebounds for Kansas this past season, the 6-foot-8 forward was named to the Associated Press’s All-American Second Team. Though Wiggins has been criticized for seemingly being too complacent and being hesitant to venture out of his comfort zone on the court, defenders of Wiggins and his game say he’s being unnecessarily and unfairly dissected. Wiggins has drawn comparisons from everyone to Kobe Bryant and LeBron James, and if willing to polish his game, could ascend to that status. With astonishing quickness, athleticism, and competency both on offense and defense, Wiggins could easily go first in the draft depending on who gets the first pick. 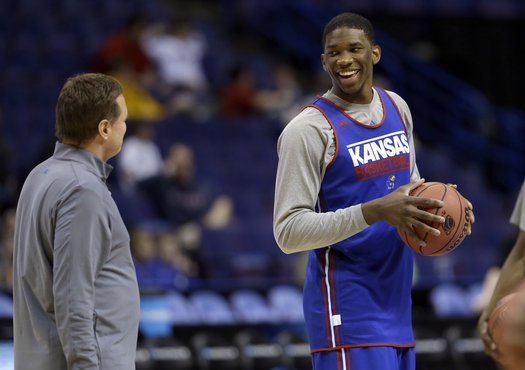 At 7 feet tall and 250 pounds, former Kansas star Embiid is, some say, the best prospect at center in nearly a decade. At Kansas, Embiid averaged 11.2 points, 8.1 rebounds, and 2.6 blocks in just 23.1 minutes — not too shabby for a guy who only started playing basketball in 2011. What concerns scouts, though, are Embiid’s injuries: He missed time for a sprained knee, and a stress fracture kept him from playing in the 2014 NCAA Tournament. Embiid could go higher than third in the draft, but his absence from the combine does little to comfort scouts or fans. Writes Michael Kaskey-Blomain, “If Embiid’s back was starting to bother him after a single 30-game college season, how is it going to hold up in the fourth year of his career after multiple 80-plus game seasons?”

Exum is probably the best point guard in the draft, and at 6-foot-6 with a 6-foot, 9.25-inch wingspan, he’s extremely tall, long, and explosive. Despite his limited exposure, Exum has impressed NBA scouts in his showings at the 2013 Nike Hoops Summit and with the Australian National Team. In its scouting report, ESPN noted that Exum can play both guard positions and has the ideal blend of athleticism and skill.

While Exum is very quick with the ball and gets to the rim almost effortlessly, his jump shot is still a work in progress and continues to be the primary weakness in his game. Having already drawn significant interest from the Philadelphia 76ers, only time will tell whether Exum’s athletic ability will be enough to overshadow his lack of U.S. experience. 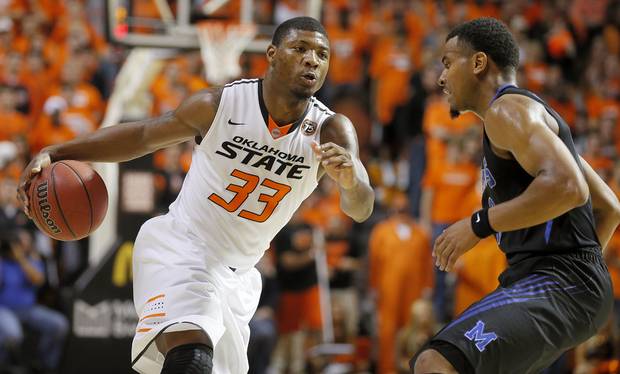 At 6-foot-4 with a 6-foot, 8-inch wingspan and a 220-pound frame, Smart is bigger and stronger than most NBA point guards, and this will work in his favor. After opting out of the draft his freshman year, Smart has been bumped down a few spots because of the competitiveness of this year’s draft and also because his sophomore numbers at Oklahoma State – 18.9 points, 5.9 rebounds, and 4.8 assists per game — were not as impressive as his freshman feats. Regardless, Smart is a physical player on both sides of the ball, and despite a few incidents, has drawn rave reviews for his character and leadership skills. 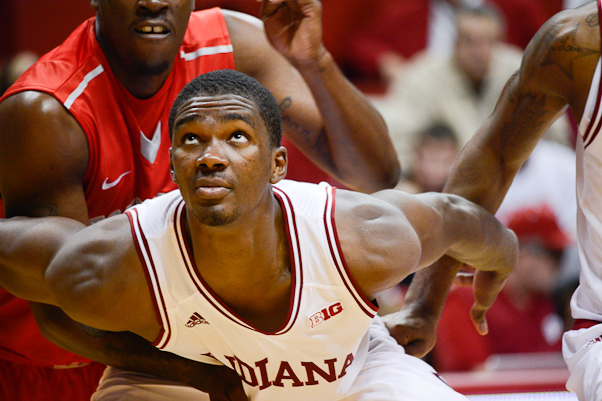 After just one season at Indiana, Vonleh declared for the draft and could be a top pick due to a combination of factors. Arguably the best power forward in the draft, Vonleh is 6-foot-10, 240 pounds with a 7-foot, 4-inch wingspan. In other words, he’s got the height and length of Kevin Durant with the strength and frame of Chris Bosh. At just 18, Vonleh has lots of room for development, but he has already shown big-league promise.

Despite only playing less than 27 minutes per game, Vonleh still led the Big Ten in rebounding, and he made 16 of 33 three-point attempts. Jonathan Wasserman of Bleacher Report, who wrote that Vonleh is the “most underappreciated” draft prospect, put it best: Vonleh is “proficient in the post, a threat from outside and an overwhelming presence on the glass. And he’s got the physical tools — size, length, strength — that should allow him to play his signature game in the pros without having to make any major adjustments.” 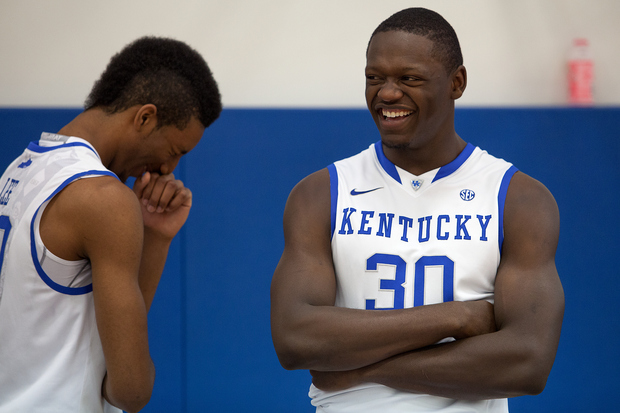 Of all the freshmen that have played at Kentucky, Randle has recorded more double-doubles (24) this past season than any of them, reports CBS’s Gary Parrish. In his freshman season, he averaged 15 points, 10.4 rebounds, and 1.4 assists. Randle is 6-foot-9 and 250 pounds with a 6-foot, 11-inch wingspan – long, but maybe not long enough to be a consistently competitive power forward in the NBA. Because Randle scored the majority of his points in the paint, Jonathan Tjarks of SB Nation supposes that Randle’s scoring ability won’t necessarily translate to the NBA, as his “style of play is not conducive to the way the league is going.” On a team with slower tempo and spacing Randle could shine, but whether teams want to take this risk could determine if Randle slides in the draft. 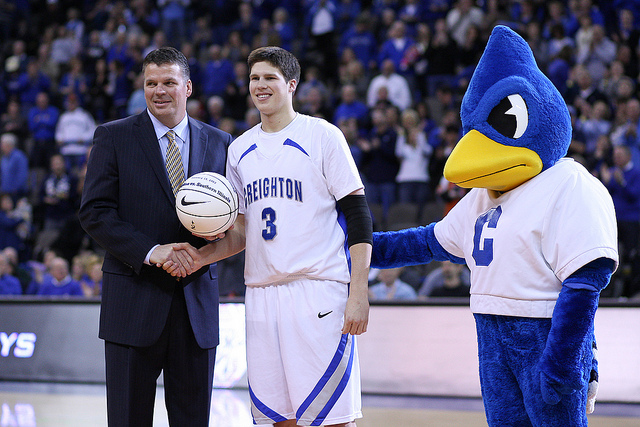 Creighton senior McDermott has no shortage of accolades, so get ready. After leading the country in scoring (26.7 ppg) while grabbing 7.2 rebounds per game, McDermott was a consensus National Player of the Year and All-American. He shot 56.7 percent on 2-point field goal attempts, 44.9 percent on 3-point attempts, and 52.5 percent overall. McDermott is one of three players in NCAA history with at least 3,000 points and 1,000 rebounds in his career, and last season, he became the first player since Patrick Ewing and Wayman Tisdale (1983-1985) to make the Associated Press All-American first team three times. At 6-foot-8 and 225 pounds, McDermott might not be an immediate star in the league, but he’s dependable and consistent with the potential to be a specialty shooter.