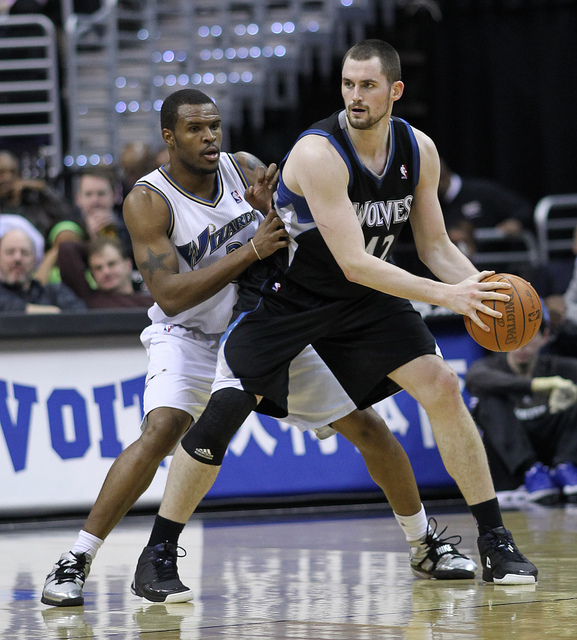 Kevin Love and Kevin Garnett share many things: a first name, a position (power forward/center) and now, with recent news about Kevin Love’s impending departure, a history with the Minnesota Timberwolves that saw both players dissatisfied with the franchise’s ability to produce a playoff run. While KG left the North Star State a while ago, fans still compare his legacy to the one Love will likely leave.

A recent ESPN piece proposed the idea that, “Minnesota has been in search of a savior since KG, but shouldering the load isn’t Kevin Love’s thing.” It also explores the idea that Garnett’s loyalty to the franchise — a chunk of years in Minnesota that could have been spent profitably on a much better team — have made it more difficult for the fans to embrace Love, who plans to leave after Minnesota has failed to make the playoffs for the past six years; the exact number of years Love has been in the NBA, and for the duration of his NBA career. Love has also been, in many ways, dared to leave the franchise.

Some wonder why he shouldn’t. After doing some math that Minnesota fans and Garnett loyalists might not have done: In his peak performance years of 2003 and 2004, the Timberwolves paid Garnett $25 and $28 million a year; whereas this season Love got $17 million. Adjusting for inflation, Garnett’s 2004 salary equals $35 million in today’s dollars — more money than any NBA player is currently paid. But is Love as good as Garnett?

In short, yes. Zach Buckley writes that, “The 25-year-old three-time All-Star rebounds like the bigs of yesteryear and stretches the floor like post players of tomorrow. He took the rebounding title in 2010-11, posted a Top Five player efficiency rating in three of the last four seasons, and held a Top Four scoring average in two of the last three.”

Now for the bigger question: Is Love better than Garnett? To some loyalists, the question itself is an offense, and entertaining the notion is even worse. After all, much of determining a player’s merit, contribution, and caliber isn’t limited simply to statistics.

But in case you are interested in statistics, columnists at Wages of Wins did some math. Looking at Garnett’s contributions to the Timberwolves until he was 25, the age Love is now, they found that despite Love’s negative attention and his supposed “lack of leadership,” that Garnett had both a lower WP48 (Wins Produced Per 48 minutes) and that he had better, more productive teammates than Love. What does this mean? Simply put, if we compare the players at similar points in their careers, then Love has done more for his team — statistically — then Garnett has.

Regardless of how and when Love leaves, one thing is almost certain: He will not be missed as much as Garnett; proving that in Minnesota, loyalty comes first.