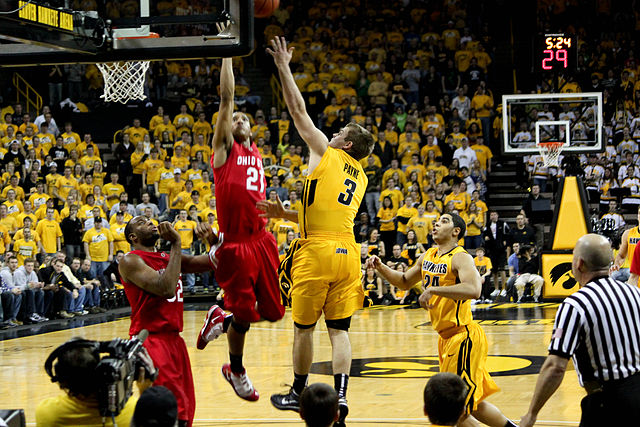 Going back to January 7, the Ohio State Buckeyes have lost four straight Big Ten games — a rare occurrence. When the Buckeyes’ losing streak commenced, they were ranked third in the country; now, they’re No. 17. They’ve shown more than a few weaknesses these past four games, like losing back-to-back to unranked teams, but the struggles can also be ascribed to a very tough Big Ten.

Now that the college basketball season is about 20 games in and more than half over, it’s tough to think that a ranked team can still be overrated or that a sub-.500 team might be dramatically underrated. Since the conference season started in late December, it has yet to disappoint.

The Big Ten has been a perfect example of parity amongst teams. Just look at Nebraska: Its 1-4 conference record is second to last. But the Cornhuskers lost a home nail-biter against Michigan on January 9 that went down to the last shot falling just short and then defeated the 17th-ranked Buckeyes at home on January 20. Whether it’s Nebraska or winless Penn State, the Big Ten’s  “bad” teams emphasize the conference’s depth and quality of play.

Winning in general has proved to be no small task this season, but winning on the road even more so, something true of college basketball as a whole. The major basketball conferences that have continually had the most ranked teams this season and been the most consistent from top to bottom (the ACC, Big Ten, and Big 12) currently have a road win percentage of just 42.3 percent. Alone, the Big Ten checks in a hair less at 42.1 percent.

The low road winning percentages are to be expected. If history has shown us anything, it’s that winning in college basketball on the road, no matter who you are and who you’re playing, is difficult. Any Big Ten road win is a good win. Just look at Wisconsin on January 14 — the Badgers were the third-ranked team in the country and traveled to Bloomington to play an unranked and rebuilding Indiana. The unfriendly confines of Assembly Hall proved to be too much for the Badgers despite their superior ranking, and they became just another statistic in a difficult conference.

What makes the road so difficult to win on? Well, first off, there’s nothing worse than a home team’s student section. They’ll banter and yell and curse at the visiting team, all the while using anything from a mother’s first name or mocking an air ball to infuriate and rattle opposing players. Then you consider playing on an unfamiliar court and more times than not, the ball just doesn’t fall.

Presently, the Big Ten has the second most ranked teams (five) in the AP Poll of any conference in the country, just one behind the Big 12. College basketball analyst Ken Pomeroy’s rankings, which use calculations and statistical analysis to determine how good a team will be instead of how good they are, presents a different picture than the standard polls. While the AP and Coaches Polls use mostly wins, losses, and recent trends to determine the rankings, Pomeroy takes into account strength of schedule, points for and against, and offensive and defensive efficiency, among other criteria.

In Pomeroy’s top-20 ranked teams, the ACC and the Big Ten appear more than any other conference, at four teams apiece. This advanced analysis highlights the difficulty of playing in the Big Ten (and other top conferences) because it factors in that a team that regularly plays elite competition is bound to lose, even to a technically lesser opponent. Iowa, with four losses that all came against top-25 teams, is the highest ranked team in these advanced statistical ratings.

Pomeroy’s analysis also looks at the win-loss margin. Considering the Hawkeyes lost to then-No. 17 Iowa State on the road by just three points and then-No. 4 Wisconsin by four, it isn’t unfathomable that they’re be ahead of Michigan State, despite the Spartans’ 18-1 overall record.

Taking into account strength of schedule and even some of the more intangible characteristics of basketball, Pomeroy’s analysis goes much deeper than simple numbers and statistics. For example, the Big Ten tends to have more veteran teams (though not Michigan this season), whereas your Kentuckys or Kansases of the NCAA usually have a few one-and-done stars. The experience that comes with veteran leadership is difficult to measure numerically but can turn a good team into a great one down the stretch.

In the preseason, Iowa was predicted to be a good team, but certainly not a top 10 team. The national champion probably won’t come from the Big Ten; heck, it hasn’t in more than a decade — though it’s not a coincidence that Big Ten teams regularly make it deep into the NCAA Tournament, either. The level of play is solid from first place to last place, and even if you’re at Northwestern’s Welsch-Ryan Arena, which seats only 8,117 fans, playing on the road there is still a daunting undertaking.

When all is said and done, comparing the Big Ten to the ACC or the Big 12 is nigh impossible. Each conference has good and bad teams, and the tiny margin of disparity makes them elite among some of the smaller conferences. The parity between the Big Ten’s best and worst make road wins against even the weakest teams in the conference that much more impressive. No conference could ever earn the outright title of “best in college basketball,” but there’s no doubt the Big Ten has been a leading candidate this season.