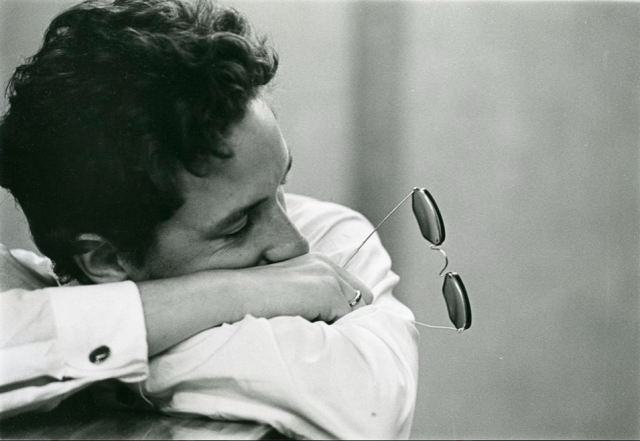 Elusive rock legend Bob Dylan will be featured in not one, but two ads to be aired during this year’s Super Bowl. The first ad uses a beloved Blonde on Blonde cut to advertise Chobani Greek yogurt, while the second one is rumored to feature an appearance from the man himself to advertise Detroit automaker Chrysler.

The Chobani ad has already been posted to YouTube. While Dylan himself doesn’t appear in the ad, his 1966 song “I Want You” from Blonde on Blonde is used in the spot. The ad mostly uses the song’s distinctive harmonica and the chorus rather than Dylan’s hallucinogenic verses about a guilty undertaker, a lonesome organ grinder, and a drunken politician all blocking the way to his beloved — who was likely not a container of honey-flavored yogurt.

The Chrysler spot hasn’t been officially announced, but sources who spoke to Billboard said that Dylan will appear in the ad, which will also feature a song from his enormous catalog. Chrysler has featured Eminem, Clint Eastwood, and Berry Gordy in its Super Bowl ads in recent years. The Eminem ad, a rapturous tribute to the Motor City, in particular gained much praise after it aired and Chrysler is likely hoping that Dylan’s appearance will work similar magic.

Dylan already licensed an unreleased version of the traditional folk song “Motherless Children” to Chrysler for a Jeep ad in the fall. The song is from a live recording made in 1962 that wasn’t released until last year. The relationship already set up between him, his record label, his management, and Chrysler makes it more likely that the Chrysler Super Bowl ad isn’t just a rumor.

While Chobani spot is pretty tame, most of Dylan’s efforts into advertising have been characteristically bizarre. His music doesn’t lend itself well to promotion. Why is a folk song about the hard life of orphans with lyrics like, “Some people say your sister will do / soon as she’s married turn her back on you / motherless children run a hard road when your mother is dead” appropriate to advertise the Jeep as the perfect vehicle for family vacations? Why would Victoria’s Secret even want his wrinkled face distracting from their uber-famous model, all to the tune of the weird and dark “Love Sick” from 1997′s Grammy-winning “Time Out of Mind?” Does the typical Victoria’s Secret customer even know who Bob Dylan is?

Chrysler may be a more appropriate choice, as the brand is trying to play up the whole “American icon” theme and is interested in reaching a wider demographic than lingerie-shopping teenagers. It’ll certainly be interesting to see which song from Dylan’s bottomless back pages will be chosen to accompany the 72-year-old’s endorsement of Chrysler in general, and likely the new 200 model specifically, according to Billboard.

The Super Bowl halftime show will feature performances from pop star Bruno Mars and the Red Hot Chili Peppers. In recent years, performances at the event’s halftime have seemed to vacillate between either boring (Tom Petty) or bizarre (Janet Jackson’s wardrobe malfunction) with little middle ground. Beyoncé’s performance last year was pretty much the epitome of diva badass, so maybe Mars and the Peppers will continue the game’s musical winning streak. If not, at least we’re guaranteed some good music during the commercial breaks.