Bubba Wallace’s scorecard for 2022 is complete: One trip to Victory Lane and one walk down the aisle, hand-in-hand with his new bride. The NASCAR Cup Series veteran exchanged wedding vows with longtime girlfriend Amanda Carter on New Year’s Eve.

Bubba Wallace and Amanda Carter got married in Charlotte

The New Year’s Eve marriage of Cup Series driver Bubba Wallace and Amanda Carter was nearly six and a half years in the making. The couple completed the journey into marriage on Saturday before 250 guests in Charlotte, North Carolina.

They planned for the festivities to continue into the night, and the guests counted down to midnight and a champagne toast.

Still, there was room for some fast food. Taking advantage of his connection to a major sponsor, Wallace scheduled a McDonald’s food truck to swing by at 1 a.m. with chicken nuggets and french fries.

“We wanted the reception to feel like a New Year’s Eve party,” Carter told the magazine.

Bubba Wallace is heading off to Bora Bora, then it’s back to work

Newlyweds Bubba Wallace, 29, and Amanda Carter will honeymoon in Bora Bora, a South Pacific island northwest of Tahiti, but the original 23XI Racing driver of the No. 23 Toyota will need to turn his attention back to NASCAR in the near future.

The season begins with the Busch Light Clash at the Los Angeles Coliseum on Feb. 5. The first points race of the Cup Series season alongside new 23XI teammate Tyler Reddick is the Daytona 500 on Feb. 19.

It will mark Wallace’s sixth full-time season, and he’ll be looking for his third victory and first playoff appearance. Wallace’s triumphs in 2021 at Talladega and last season at Kansas both took place after he failed to qualify for the playoffs.

There will be more weddings down the road 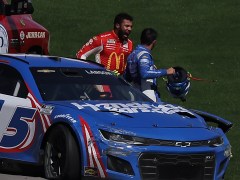 Jeff Burton’s Suggestion Would Keep Bubba Wallace, Austin Hill, and NASCAR on the Straight and Narrow 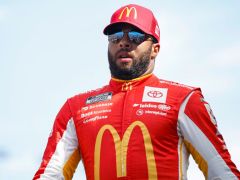 If Bubba Wallace Was Truly Sorry for His Actions, He Wouldn’t Suggest NASCAR Treated Him Unfairly

Bubba Wallace wasn’t the only NASCAR driver to have a big week in the relationships department.