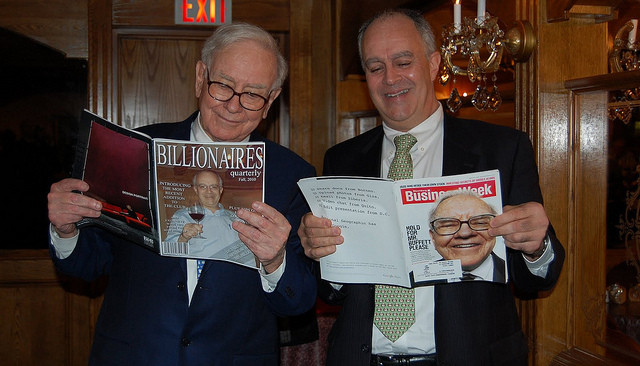 If there’s anything that could make March Madness even more frenetic, anything that could make the Big Dance bigger, it’s a billion-dollar carrot on a stick for the perfect bracket. Warren Buffett, the self-made billionaire chairman and chief executive of Berkshire Hathaway , has partnered with Dan Gilbert, founder of Quicken Loans and owner of the Cleveland Cavaliers, to do just that. The two announced the contest and its $1 billion grand prize on Tuesday, setting the wheels in motion for what is likely to be one of the most closely watched NCAA men’s basketball tournaments to date.

“We’ve seen a lot of contests offering a million dollars for putting together a good bracket, which got us thinking, what is the perfect bracket worth?” said Jay Farner, president and chief marketing officer at Quicken Loans, to the Associated Press. “We decided a billion dollars seems right for such an impressive feat. It is our mission to create amazing experiences for our clients. This contest, with the possibility of creating a billionaire, definitely fits that bill.”

To be clear, the billion-dollar prize would be subject to taxes, meaning that if some mad genius (or lucky fool) wins, that person would pocket about $500 million from a lump-sum payment or take home 40 annual installments of $25 million. Either way, this is the kind of payday that would put a basketball wonk into the millionaire’s club — not the billionaire’s club — but this hardly seems like an important detail. This is the kind of prize pool that will have statisticians and die-hard fans collaborating and competing.

So how likely is it that someone will create a perfect bracket, accurately predicting each winner in the tournament? In a 64-team bracket, the odds are less than one in 9 quintillion (2^63) if you are simply selecting randomly. However, with an intelligence guiding the selection process, Jeff Bergen, a math professor at DePaul University, told Bloomberg the odds improve to some a little more reasonable — or, at least, fathomable — about one in 128 billion. With 10 million knowledgable entrants into the contest, Bergen puts the odds of a billion-dollar payout at about 1 in 10,000.

If no one creates a perfect bracket, the 20 most accurate “imperfect” brackets will each receive a $100,000 prize, a total prize pool that is substantially less than the grand prize but still nothing to scoff at. The bar to qualify for the top 20 spots will be set pretty high, too. Of the 8.15 million brackets submitted to ESPN last year, none were perfect after the field was narrowed to 32 teams. At the end of the day, five brackets shared the top slot with a 30-2 track record.