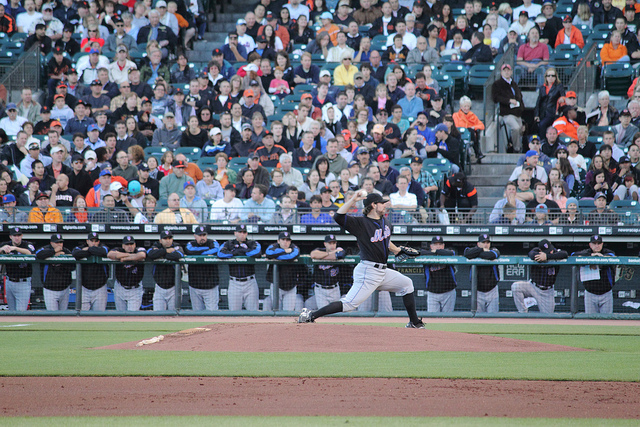 If a tale of an underdog is still the stuff Hollywood dreams are made on, then Ben McKenzie and Logan Marshall-Green have a winner on their hands with Wherever I Wind Up, the memoir that tells MLB pitcher R.A. Dickey’s life story. Deadline Hollywood reports McKenzie and Green will bring Dickey’s inspirational memoir to life in a production for Sony Entertainment’s  TriStar Pictures, though neither will protray the knuckleball pitcher in the film.

Dickey’s story does not follow the usual trajectory of an athlete’s rise to prominence. After enduring life as a journeyman minor league ballplayer into his 30s, Dickey finally emerged as a knuckleball pitcher and got his shot with the New York Mets. He made the most of it by winning the NL Cy Young award in 2012.

The leadup to that high water mark of his professional career is the meat of the subject matter. Dickey was forced to take up the knuckleball as a last resort to save his dream of being a ballplayer. Becoming a knuckleball pitcher means being indoctrinated into a cult of former and current MLB hurlers who relied on the most unpredictable of pitches to get outs from the world’s best hitters. Dickey astonished fans and the sport as a while with his thoughtful, reflective persona in the clubhouse during his Cy Young season, and that feeling comes through in his acclaimed book.

McKenzie and Marshall-Green, both former stars of The O.C., have a tall order to fill in the first venture of their new company, which is called A Thing or Two Productions, though they already have help in the writing department.

According to Deadline, Buzz Bissinger of Friday Night Lights fame is set to write the script for the film Michael De Luca will produce with McKenzie and Marshall-Green. Sony Entertainment, which has Monuments Men, The Amazing Spider-Man 2, and Pompeii currently in theaters, has football film When the Game Stands Tall slated for an August release.

As for the team working with Marshall-Green and McKenzie, the duo couldn’t ask for much more than De Luca, who was behind both Captain Phillips and The Social Network. Sony Pictures has one of the biggest baseball hits on its resume as well with Moneyball, which starred Brad Pitt.

Throw in the Pulitzer Prize-winning Bissinger and the ex-O.C. actors have their feet firmly planted on the ground for the Dickey movie. They also have the trust of the knuckleball pitcher, who agreed to sell them the rights to his book after a meeting at Dickey’s Nashville home.