The weather is getting colder, days are shorter, and the holiday season is right around the corner. The NFL is entering its stretch run of the regular season, and schools are trying to break into the four-team tournament in college football. With all of that, you probably have enough on your plate. But find room for one more thing — because you’ll want to pay attention to college basketball over the next five months.

Now catching up with the day’s sports will not be strictly about footballs happenings and what LeBron James and Stephen Curry ate for dinner. It will include the wildness that makes men’s college basketball one of the most exciting sports in the country. With the 2015-16 season underway, here are 10 teams that should be in contention for the high tournament seeds and, ultimately, the Final Four.

The SEC is typically all about the Kentucky Wildcats, but the conference looks much stronger this season, mainly because the LSU Tigers have the makeup of a team ready for a surprising Final Four run. Freshman Ben Simmons is an intriguing player with loads of athleticism. He is great at grabbing rebounds and showed flashes of his scoring capability in the Tigers’ season opener. Other players, like fellow freshmen Antonio Blakeney and Brandon Sampson, give LSU a crop of young talent that will be fun to watch and tough to contain this season. Obviously, LSU needs to prove they can beat Kentucky if they truly want to be considered a top-10 team (with two chances to do just that), but the Tigers have the assets to be a contender this season.

Perennially the best team in the Pac-12, Arizona is loaded with talent this season and could very well win the conference again. The Wildcats have been so close to the Final Four during the past two seasons, losing in the Elite Eight to Wisconsin both times. This team is motivated and will play with a chip on their shoulder as they try to get over this hurdle. Players like Gabe York and Ryan Anderson provide a reason to believe that the Wildcats can do just that. They’ll have to deal with the likes of Cal-Berkeley and Utah in the conference, but Arizona appears to be the slight favorite in the conference and feels like a contender on the national level. 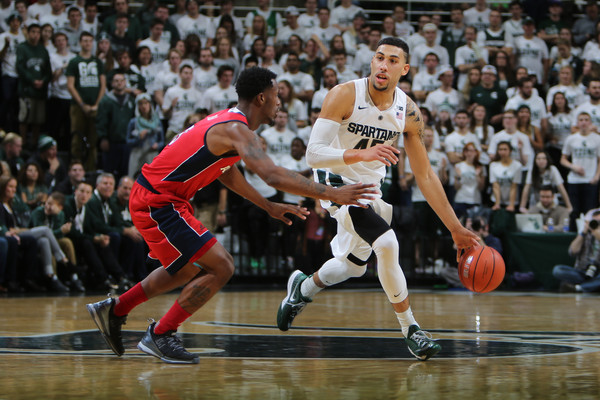 Tom Izzo and the Spartans are always a contender for the Final Four. They proved last season that even when they aren’t the most talented team in the country, they are still a force to be reckoned with (as shown by their run in the NCAA Tournament as the No. 7 seed). This season will be no different for Michigan State as they are among the favorites in the Big 10 once again. Denzel Valentine can score, grab rebounds, and dish out assists. Other players, like Matt Costello and Deyonta Davis, are capable scorers and rebounders as well. Izzo always knows how to get the most out of his guys, so even in their tough conference — with the likes of Indiana and Maryland — the Spartans will be there at the end once again.

After an early exit in the NCAA Tournament a season ago, Villanova is ready to prove they belong among the nation’s elite programs. Jay Wright is one of the best coaches in the country, building a foundation of success in Philadelphia. This team is also loaded with experienced players who won’t be overwhelmed by any situation. Senior Daniel Ochefu knows how to score and rebound, and junior Kris Jenkins is solid as well. Playing in the Big East, the Wildcats probably have an easier schedule than most of the other top teams in the country. However, that doesn’t diminish their value as a top-tier contender. The experience on their roster could lead them to new heights.

Another perennial powerhouse, the Kansas Jayhawks are loaded with talent once again this season. It feels like eons since the school won its last national championship (it was only in 2008) and after being upset in the second round of the tournament a season ago, the team feels pressure to do big things this season. With players like Perry Ellis and Wayne Selden Jr., the Jayhawks are more than capable of rising to the occasion. The Big 12 is never easy (even if Kansas wins it every year), and Oklahoma and Iowa State will challenge this team. Still, Kansas has the talent to thrive once again. A Final Four appearance is definitely not out of the question.

The defending national champions are primed for a repeat come April in Houston. Duke always gets top recruits, and Coach K knows how to use them. This year’s version of the Blue Devils is no exception. The new crop of players in Durham includes freshman guard Brandon Ingram, who looked pretty comfortable in Duke’s season opener. Sophomore guard Grayson Allen appears primed for a big campaign as well. The ACC is loaded, as usual, with the likes of Virginia and North Carolina joining Duke at the top. That might hurt their chances at the No. 1 seed come tournament time, but it will make them more prepared for those tight battles in March. It would be shocking if Duke wasn’t in serious contention for a second straight championship.

This has to be Virginia’s year to make it to the Final Four. The Cavaliers have been one of the top teams in the nation over the past couple seasons, but they’ve come up short when the games matter, losing in the Sweet 16 to Michigan State last year. With experienced players like seniors Mike Tobey and Anthony Gill, this could be the last (and the best) chance for this current version of the Cavaliers to make their championship run. They’ll have to survive the ACC, but with experience and great defense, Virginia is going to be tough to knock out.

Kentucky doesn’t rebuild when they lose all their talent year in and year out; they simply reload. The top high school recruits in the nation love to play for Coach Calipari because they know he will help get them drafted high in the NBA. That’s why the Wildcats have talented freshmen, Jamal Murray and Skal Labissiere, on their roster this season, giving them another great chance to reach the Final Four and avenge their semifinal loss a season ago. Playing in the SEC means that Kentucky will win a bunch of games and in all likelihood get a top seed in the tournament. Regardless, as long as Calipari is at the helm, the Wildcats will always be a championship contender.

The Terrapins are the trendy and fresh talk of the college basketball world this season. They were solid last season before suffering a disappointing defeat in the NCAA Tournament, but this is the season when Maryland could really take the nation by storm. With guys like sophomore Melo Trimble and senior Jake Layman, the Terrapins can score and defend with the best of the best. Their roster is deep and despite playing in the Big 10, this is a team that is going to win a lot of games. Battles with Michigan State and others could determine a lot, but look out for Maryland, a somewhat nontraditional school that has a great shot at Houston and the Final Four.

North Carolina is the preseason and current No. 1 team in the nation for a reason: They are really good. After showing their potential with a Sweet 16 appearance last season, the Tar Heels have the best makeup of players, which they’ve had since their last championship team of 2009. Junior Kennedy Meeks is a force down low, leading a roster full of mostly juniors and seniors. (The Tar Heels may have the most experienced roster in the nation.)

Their experience will be huge in games against Duke and Virginia, as the team tries to capture the ACC. While freshman talent is nice and generates plenty of excitement and headlines, North Carolina’s experienced talent gives them edge this season. They deserve to be the favorite until someone proves otherwise.

All stats courtesy of ESPN.go.com