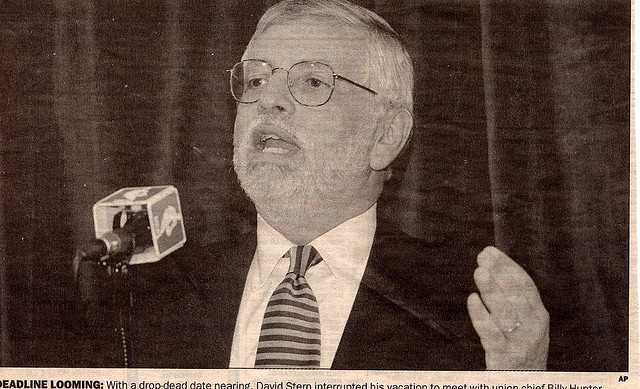 When the great hoops histories are written, they will say this: On February 1, 2014, David Stern retired as commissioner of the National Basketball Association, exactly 30 years after he stepped into the role. Stern, arguably the most divisive and most entertaining commissioner in American professional sports, ends a professional relationship with the NBA that spans almost 50 years, going back to his initial role as outside counsel to the league in 1966. From there, Stern worked his way up the ladder to the General Council of the league in 1978, executive vice president of the NBA in 1980, and took over for Larry O’Brien (the same Larry O’Brien for whom the NBA Finals trophy is now named, thanks to Stern) in 1984.

Since 1984, as you may have suspected, basketball has exploded in popularity, riding the crest of a wave that began with the battles of Earvin “Magic” Johnson and Larry Bird, and crashed to shore with the arrival of Michael Jordan and everything that entailed. While people were certainly watching the NBA (and the American Basketball Association) before Stern’s tenure, the numbers doubled, tripled, quadrupled, and continue to escalate into the present day. How much of that is owed directly to Stern is up for debate, but the fact remains that he was there, he’s happy to take credit for it, and he’s happy to bask in the caricature of being a public figure.

Who else would’ve welcomed being booed at every single draft in recent memory, even when the boos turned to cheers at the conclusion of the first round of the 2013 draft? Who else would’ve embraced every opportunity to play the villain for fun while positioning himself as the savior of the NBA? Stern, alone among sports commissioners, is a character worthy of a television show or a novel, and as his career comes to a close, we’re taking a look at some of the most memorable moments from the Stern era of the league. 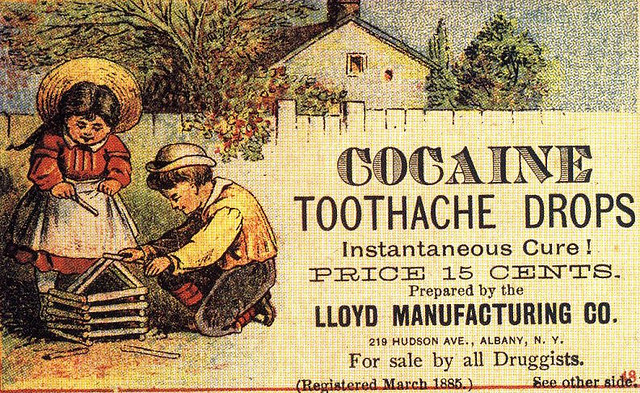 Cleaning up the NBA

Two years into Stern’s tenure as commissioner, the Chicago Tribune ran a story about the NBA’s drug problem, rightly signifying cocaine as the “scourge of the NBA.” That article ran four months before Len Bias, the second overall pick in that year’s draft, overdosed two days after the selection and a year before a promising Phoenix Suns team was torn apart by a cocaine trafficking scandal — later known as Waltergate, after former NBA player Walter Davis. This, understandably, was not doing wonders for the league’s image.

Nowadays, Stern receives sole credit for getting cocaine out of the NBA. That’s obviously an oversimplification, but by taking a bold public stand on the issue — he famously banned All-Star Michael Ray Richardson from the league with no possibility of re-admittance — and working with the National Basketball Players Association (NBPA) to concoct an anti-drug plan that would help curb use in the league and provide assistance to players looking to get clean, Stern and the NBA positioned themselves as a compassionate, thoughtful entity that was going to deal with the problems of the day head on.

While there will always be uncertainty over who might be using what in professional sports leagues, the fact that the NBA, once synonymous with cocaine use, has largely washed its hands of any drug relationships stands as one of the clear victories of Stern’s tenure. Perhaps there can be no better example of that than possible 2014 No. 1 draft pick Andrew Wiggins. Did you know that his father, Mitchell Wiggins, was one of the NBA players suspended from the league for a positive cocaine test? Of course you didn’t. And that, in some way, is owed to Stern. 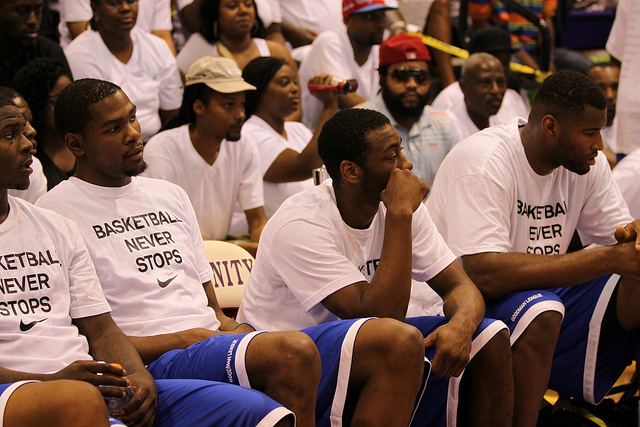 It was same song’s second verse for the 1996 NBA lockout, which lasted for less than three hours. That one was over a disagreement over television revenue, in which the players “union wanted all the money to go toward player salaries, and the league wanted it split 50-50.” The first “real” lockout of the NBA wouldn’t occur until 1998, when both sides, again arguing about which was going to get how much of the money the league was bringing in. And just like in 2011 (how’s that for foreshadowing?), the owners said that they were losing money on their franchises. The players said that was nonsense, and the ’98-’99 season was shortened to 50 games over a handful of months. It was, easily one of the worst NBA seasons ever.

But, of course, once the collective bargaining agreement that emerged from the sheer misery that was the ’98 lockout expired in 2011, the league suffered yet another setback. The 2011 lockout lasted for five-and-a-half months and centered around reducing the player’s share of BRI, or basketball related income, from 57 percent. Eventually, both sides would agree on a 50-50 split, and the NBA fan base was treated to a fairly abysmal 66-game season. 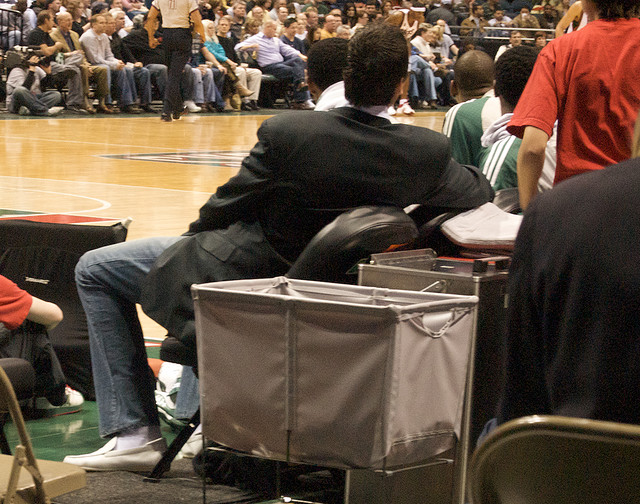 Even the lockout would prove less divisive than another part of Stern’s legacy: the league dress code. With the NBA’s popularity taking a hit with local audiences in the wake of the Malice at the Palace and the increasing controversy over the “hip-hop” image being brought to the forefront of the league by stars like Allen Iverson, Stern issued an NBA dress code at the outset of the 2005-2006 season, saying that the league is ”just changing the definition of the uniform that you wear when you are on NBA business.” Banning jerseys, do-rags, and chains, pendants, or medallions worn over players’ clothes, the backlash, as well as the cultural implications, was complicated.

Almost 10 years on, though, it appears that the dress code hasn’t curbed the rebelliousness of the league’s fashion like the front office hoped it would, nor has it stifled the individual expression of the players, like some stars feared. The average fan has only to look at an NBA press conference to see clothing and styles that, while certainly less “hip-hop,” as far as the term was used back in the mid-aughts, is no less challenging to “normal.” (Unless your definition of normal fashion includes lensless eyewear.)

All told, the dress code hasn’t done a whole lot, really. The NBA that Stern is leaving features players who are pushing the envelope of what is considered possible on the court as well as what they can get away with off the court. You could say that while the dress code announcement was certainly memorable, all it did was usher in some sartorial sarcasm to the players’ wardrobes — never forget the ubiquitous Kevin Durant backpack of 2012. 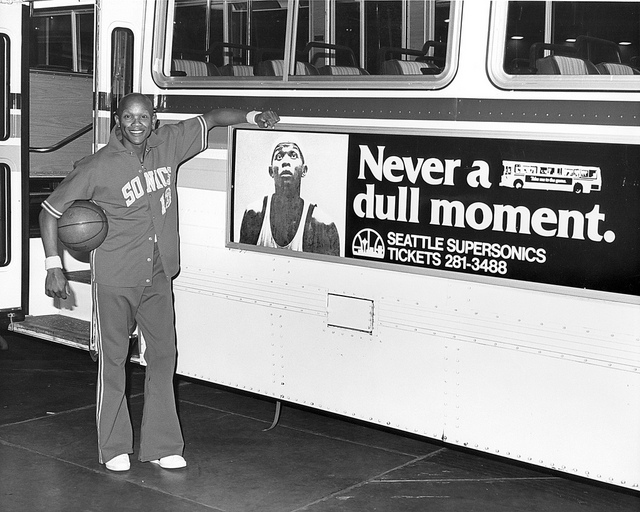 From a harmless thing to a very harmful thing, both featuring Durant. In 1966, the same year Stern began working with the NBA as outside counsel, the city of Seattle was awarded an NBA franchise. That team was called the Seattle SuperSonics.

In 1979, the Sonics won an NBA Championship. In 1996, the Sonics took the Chicago Bulls to six games in a series for the ages that features Seattle luminaries Gary Payton and Shawn Kemp matched up against Chicago’s Michael Jordan, Scottie Pippin, and Dennis Rodman. In 2007, the Sonics, after rebuilding for a majority of the interim, would draft Kevin Durant, current favorite for the 2014 MVP award.

Also in 2007? The ownership group that purchased the Seattle SuperSonics decided to move them to Oklahoma City, creating an ugly, protracted fight between the city and the ownership that publicly centered around financing a new arena. Privately, according to email shared within the ownership group, the plan had been to deprive Seattle of basketball all along. The ethical repercussions of what can accurately be called the theft of a storied NBA franchise so troubled Stern that he would go out of his way to strongly assist the Sacramento Kings from being relocated in 2013 — in a savage twist, he would end up stopping the Kings from going to Seattle as the newest iteration of the Sonics. 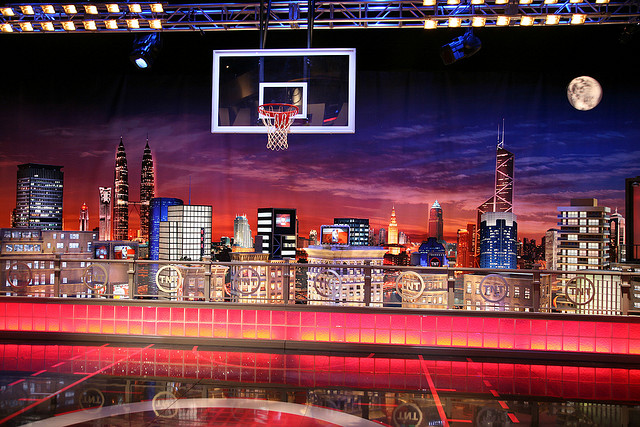 Luckily for David Stern, the saga of the Seattle SuperSonics will not be the biggest piece of his legacy. Neither will the dress code. And it won’t be the lockouts. It’ll be the money.

According to the man himself, the first deal he ever made for television was for $400,000 in 1979, (adjusted for inflation, that deal would be worth about 1.2 million dollars today) and the league was covered by three different networks. Now, with basketball’s global popularity on the rise and constant television coverage — from local sports stations during the regular season to news conglomerates like CBS and ABC during the Playoffs and the Finals, any TV deal the NBA inks will be worth many times that first amount.

Some of the greatest NBA players of all time worked under a cover of media darkness. Even the most astute NBA fan would have a difficult time picking Oscar Robertson out of a lineup. But, thanks in part to David Stern’s business acumen and flair for promotion, the basketball stars (and teams) of today and tomorrow are in our faces, on our televisions, in our classrooms, and all over the internet. Basketball is impossible to get away from in 2014, and for that we have to thank David Stern, NBA Commissioner 1984-2014.