To the delight of Dallas fans and to the mild bewilderment of everyone else, running back DeMarco Murray started off the season on fire, becoming the first Cowboy in franchise history to break the 100-yard mark in the team’s first eight games, and helping the ‘Boys charge out to a six win, one loss record — which has since been derailed, as the Cowboys currently sit at six and three, just behind the Eagles in the NFC East. While certain sports outlets are alleging that Murray is the first player to run for over 100 yards in eight consecutive games, that’s not actually the case, although he is slotting himself in with some very historic names by even coming close to that individual record, which, again, he doesn’t hold.

Who does have the most consecutive games with a football field’s worth of yardage, then? And how far back is DeMarco Murray from the record (the answer to that is “not close at all” since he’s starting from zero again)? We’ve combed the record books and the numbers and found out which players are at the top when it came to week-in, week-out consistency on the ground. All numbers courtesy of Pro Football Reference, as per usual.

Now best known as the name on the NFL’s Man of The Year award, which seeks to honor a player’s charity work and volunteering, Walter Payton was able to rush for 100 yards in 10 separate games over the 1985 season — however, after cracking the century mark in the opening game of the season, a 38-28 win over Tampa Bay, Peyton wouldn’t get on his roll until game six, against the San Francisco 49ers, peeling off nine straight until week 15, which was a win over the Jets. And, yes, if you’re wondering, there really is a massive tie for third place — most running backs seem to hit nine games on this list, it seems. 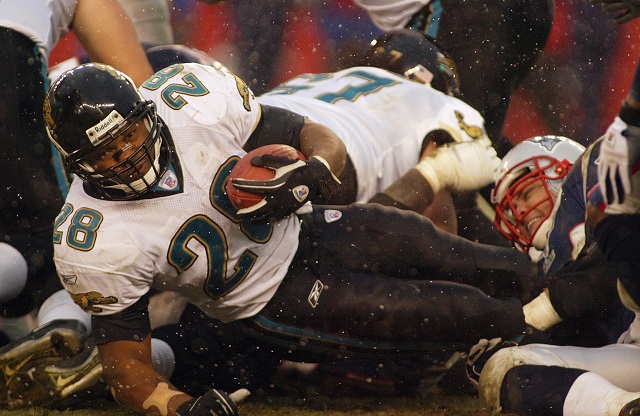 Fred Taylor is the undisputed bright spot of the Jacksonville Jaguars rushing history, and his place in the history books more than validates his high draft stock — Taylor was taken ninth overall in 1998 — even if he wasn’t able to lead the Jags to any memorable successes. Like Payton, the Jacksonville ‘back took a while to get into his rhythm, but starting in week seven, Taylor proceeded to finish off the season in style, notching 100-yard games for almost the rest of the year.

It’s weird to think of the Saints as a team associated with rushing records, rather than passing milestones, but in the pre-Brees era, Deuce McAllister was able to pull off a midseason miracle, running his heart out through the meat of the season. Unfortunately for the ‘back, the Saints were only able to nab five wins over that nine game streak, and they finished at .500 for the season, missing the playoffs.

While Johnson has been involved in enough off-the-field action to make us pretty sure we wouldn’t go out of our way to hang out with him (particularly at a bar), we’ve got to give him a nod for his incredible play in the 2005 season, when he recorded a 100-yard game for the last nine Kansas City outings of the season, following up on his game one potential.

The mythical 2006 season for LT, who might go down as the best running back from the mid ’00s to finish up his career without winning a ring, was the one where he managed to score 14 touchdowns in just four games. To be honest, we thought this season was going to rank this a little higher, but it turns out Tomlinson didn’t turn on the “go-fast” enough to break that 100-yard mark consistently until the second half of the season. Go figure.

The first of only two players in NFL history to make it over the nine game hump, Marcus Allen’s consecutive games with more than 100 yards rushed are even more atypical in that they came over the course of the parts of two separate seasons — starting in week 8 of 1985 and not stopping until the third week of 1986. That’s pretty nuts.

But no one’s coming close to Barry Sanders, who still has the consecutive century lead safely in the bag, having spent most of 1997 casually making everyone else’s attempts at a quality running season look silly. Unfortunately, Sanders’ efforts weren’t enough most of the time, as the Lions only finished 9-7 — which is good for the Lions, maybe, but not too great for a team with that kind of all-time season being submitted.