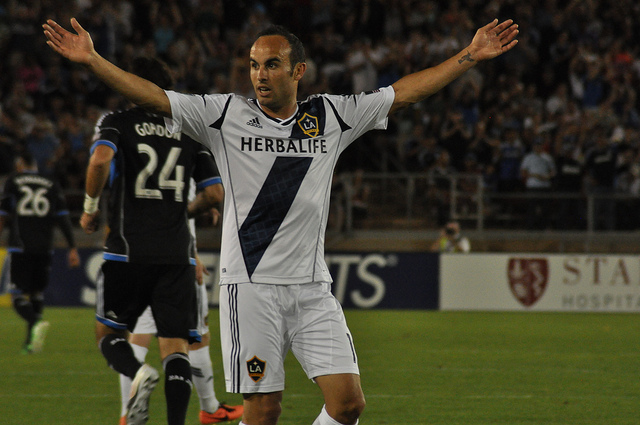 Landon Donovan has scored 57 goals for the U.S. men’s soccer team, 19 more than the total racked up by the No. 2 all-time scorer, U.S. World Cup team captain Clint Dempsey. He’s also had 58 assists, 36 more setups than Hall of Fame midfielder Cobi Jones, and racked up 156 international appearances. Additionally, he has more World Cup goals than Cristiano Ronaldo, Robin van Persie, and Lionel Messi combined. Yet Donovan, 32, was recently cut from the World Cup squad as coach Jurgen Klinsmann trimmed his roster to 23 players.

Some speculate that Donovan did not “endear himself” to Klinsmann by taking a self-imposed four-month break from soccer in December 2012, and that the two had a rockier relationship. Whatever the case, the reactions to Donovan being cut ranged from positive to downright weird. Read on as we break down some of the top responses to the news.

In an op-ed for the Los Angeles Times, Arena kept it succinct: “Donovan could have provided invaluable experience and some other options for Klinsmann at the attacking end of the field. The bottom half of the roster is somewhat young and very inexperienced.”

Arena was more candid in a May 23 interview, when he said, “If it was my decision he’d be on the team, but it’s not my decision so I leave it at that and only time tells whether these things make sense or they don’t make sense.”

In an article prior to the cut that detailed Donovan’s preparation for the World Cup, Arena perhaps put it best when he entertained the notion of a 2014 World Cup without Donovan: “If there are 23 better players than Landon, then we have a chance to win the World Cup,” he said. 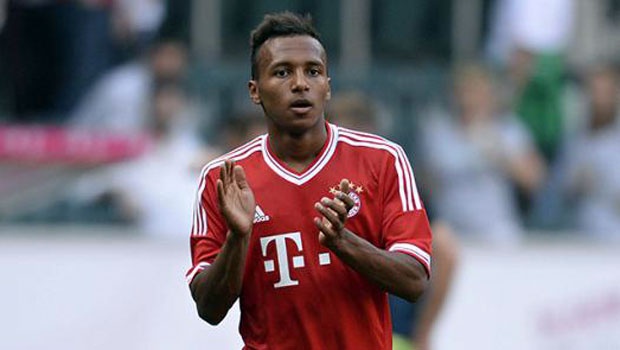 Critics say Green, only 18, has been selected for the World Cup at Donovan’s expense. Green, who played this season on Bayern Munich’s reserve team in the fourth division of German soccer, has played just “three minutes of top-flight professional soccer” in his career, according to Business Insider.

Green is also a dual national who switched alliances from Germany to the United States in March, sparking rumors that Klinsmann promised him a spot in Brazil in exchange for his commitment. When asked about the omission of Donovan, Green said: “I’m a young player and I can’t comment. That’s the decision of the coach. Landon is a good player, but it’s the decision of the coach.”

U.S. players now call Green the team’s “X-factor,” and Donovan was careful to heap praise on Green as recently as May, saying the player was still young and needed time to develop.

Lalas is well known in the soccer arena: A former MLS and World Cup player, he had a brief foray into general managing but is now on air at ESPN. Lalas tweeted that given Klinsmann’s disappointment in Donovan’s sabbatical to Cambodia, Donovan should have been cut then, instead of being allowed a chance to return, play well in the Gold Cup, and make the original roster of 30. 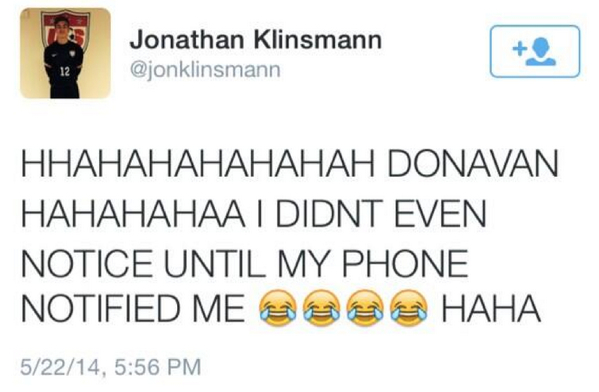 Though his Twitter account has since been deleted, Jurgen Klinsmann’s son, a 17-year-old goalkeeper for the U.S. youth national team, came under quick fire for his insensitive tweet upon hearing the Donovan news.

“Hugely disappointed,” Jurgen Klinsmann said of the incident. “I called him right away, he realized just a few minutes after that what he has done. He came out of school kind of fooling around with his classmates, and they just went off on Twitter not being aware of that he’s actually followed on Twitter. He has a huge admiration for Landon. He’s actually a big fan of his since many many years, he has his jersey in his room and he realized what he’s done. He was devastated yesterday.

“Obviously as a father you put him in line, and he owes him a huge, huge apology. That was highly disrespectful, and I think he got his biggest social media lesson he could imagine. It was very disappointing.”

Bradley, a 26-year-old midfielder who plays for Toronto FC in the MLS, is widely considered a leader for the U.S. Men’s National Team. Though he was sympathetic to Donovan’s departure, he also added that the focus should be on the players heading to Brazil.

“When certain decisions get made, certain things are easy to say and write and talk about,” Bradley said to Sports Illustrated. “But one of the strengths of this team has been the ability to shut that door and on the inside have a group that is together and committed and ready to step on that field and fight.

“We all have an incredible amount of respect and appreciation and admiration for everything Landon has done for this team and for soccer in this country. To see him walk out the door, to see six other guys walk out, is not easy. But at this point there is a group of 23 guys who are ready to go to a World Cup and forget about everything else and make it something special. That is what we are talking about and that is what you guys should be talking about.”