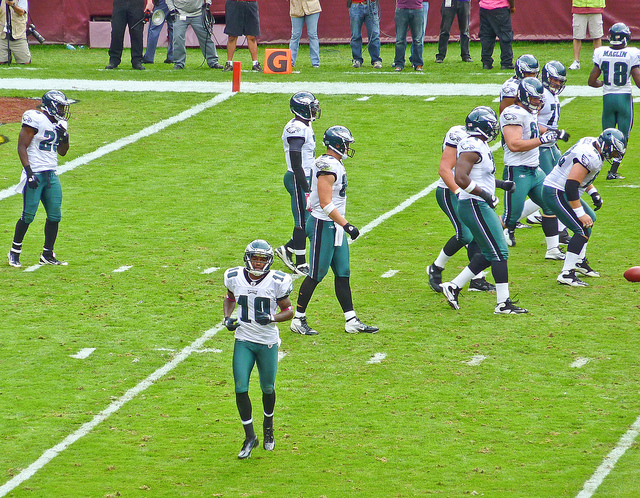 DeSean Jackson, a wide receiver coming off a fantastic 2013 with the Philadelphia Eagles — a season that saw him catch 82 passes for over 1,300 yards and 9 touchdowns — was abruptly let go by the organization earlier this week. The Eagles, who hired new head coach Chip Kelly in the offseason, had been attempting to trade Jackson before a report from NJ.com surfaced, alleging that the Eagles had kept tabs on the receiver and his involvement with a pair of accused gang members who were involved in a fatal 2010 shooting. The news that Jackson had been waived appeared approximately 30 minutes after the NJ.com story was published.

While the Eagles didn’t seem to have a problem with Jackson’s affiliations prior to this offseason — according to the story, the franchise had been aware of the relationships since early 2011 — the bright lights that shined on Aaron Hernandez, the New England Patriots Tight End implicated in a gristly homicide last year, have caused teams to reevaluate what they are willing to tolerate in the extracurricular activities of their players. Or, perhaps, Chip Kelly wanted Jackson out.

“A bad attitude, an inconsistent work ethic, missed meetings, and a lack of chemistry with head coach Chip Kelly were the original reasons for his fall from grace,” reported NJ.com. The fact that Jackson, who had signed  a 5-year, $47 million contract in 2012 was due an unguaranteed $10 million this upcoming season — a sum that made any kind of trade difficult in the event that the team wanted to move on from the player — was not addressed.

I know @DeseanJackson10 very very very well. If the Eagles where so concerned about his “Gang Ties” they wouldnt had drafted him 6 years ago

The person who drafted DeSean Jackson was Andy Reid, now the head coach for the Kansas City Chiefs, who still showered praise on the wideout. “I have nothing but good things to say about the kid,” Reid told ESPN. “I had a great relationship with him. When his father passed away, that was a hard thing for him to go through at a young age. They were best friends. I’ve experienced life things with him, so I would tell you he was great for me when I was there.”

Jackson’s college head coach, Raul Lara, was quoted in the NJ.com story as saying that, “[After his father’s death] I think DeSean started to hang around some not-so-good people.” He refuted the contextual implication to The Press Telegram. “Gangbanger, what the hell is that about? He’s not a gangbanger. All I was saying was that it was a tragic part of his life when his father died,” Lara said. “He’s not a gangbanger, I don’t know where they’re getting that from, and I didn’t say that he was.”

Jackson’s release will save the Eagles an estimated $26 million dollars in cap space through 2016, per EaglesCap.com. The wide Receiver is in talks with the Washington Redskins, the Buffalo Bills, and the Oakland Raiders, according to Yahoo Sports. There is a distinct possibility that Jackson will make less money in 2013 on his new contract than he would’ve made with the Eagles.