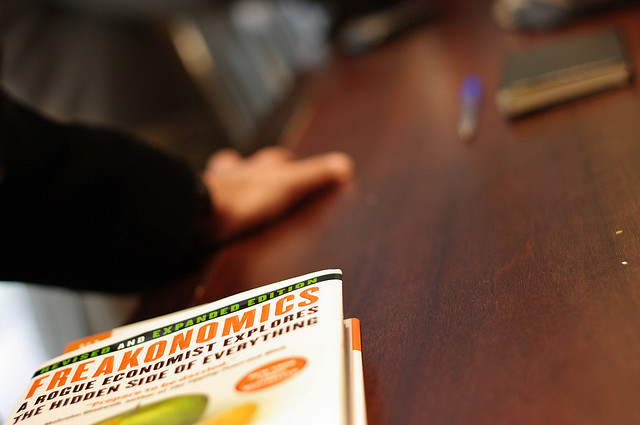 In case you’re not the kind of person that counts down to the first weekend in May with one hand on a flowery hat and the other clutching a fresh mint julep, you might’ve failed to notice that the Kentucky Derby, that famously decadent and depraved horse racing event for 3-year-old Thoroughbreds, is about to take over the Louisville community again. The Derby, which is the punctuation on a two-week party in Kentucky’s capital, attracts national attention and the chance to watch what’s often described as the fastest two minutes in sports, a phrase that makes about as much sense as turning down another mint julep.

Steven Levitt, one of the co-authors of the popular nonfiction book Freakonomics – a look into “the hidden side of almost everything,” per the book’s subtitle — doesn’t predict anything in public except his guesses of each of the three winners of the Triple Crown horse races held every year. So, as the Derby descends upon us for another round of racetrack action and gambling adventures, let’s take a gander at Levitt’s picks and see what the Freakonomics author’s insights tell us about the race. But first, a disclaimer from his blog:

“The nice thing about making so few predictions is that by the time next year’s predictions roll around, no one can remember how last year’s predictions turned out. My very worst year, I named with confidence the horse that I believed would finish dead last, when in fact that horse won the race! Nonetheless, people still asked me for my picks the next year.”

Cutting straight to the chase: That’s Chitu, the horse Levitt is predicting to win the Derby. When he made his blog post, Chitu’s odds were 20-to-1. As of Friday afternoon they’re 26-1, according to NJ.com’s odds (gambling on sports being legal in New Jersey and not so much in most other places). Go ahead and place your bets on Chitu; we’ll wait.

“California Chrome is not such a bad bet either. But in races like the Kentucky Derby, where there is so much attention and so many horses, I have a general rule to steer clear of prohibitive favorites,” Levitt wrote in his post. “So it is not that I think California Chrome doesn’t have a good chance of being among the top finishers, it is just that from a betting perspective I think he is a sucker bet.”