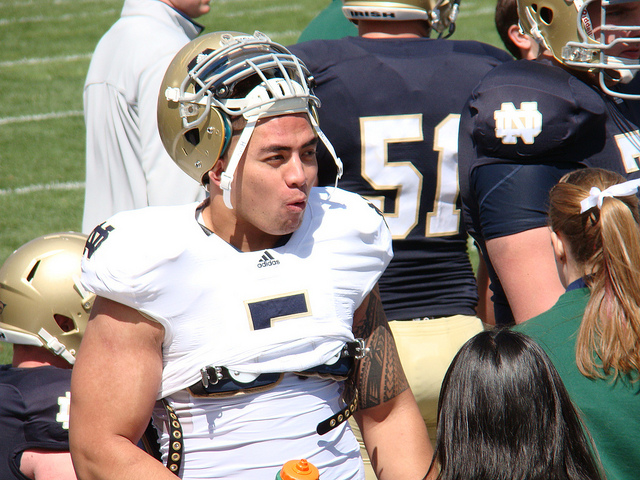 Sports fans can be fickle with their love or hate, but it seems Manti Te’o has not yet been forgiven for his fake girlfriend drama that captivated football audiences earlier this year. The San Diego Chargers linebacker, in his rookie season, has been voted the second-most hated player in the NFL, according to surveys from E-Poll Market Research.

The survey’s E-score took into account reports from 1,100 people aged 13 and over and rated more than 7,500 celebrities on appeal, likability, and other attributes. For football, only active NFL players who registered a minimum 10 percent awareness level with the public were considered. Te’o received a 48 percent disapproval rating, better only than Michael Vick at 53 percent. Vick, the Philadelphia Eagles quarterback, was implicated in an illegal interstate dog fighting ring back in 2007 and still hasn’t managed to erase that blot from his public perception.

Te’o, who claimed he was the victim of a catfish prank in the saga that included his assumed girlfriend, Lennay Kekua, dying of cancer, has clearly not been able to convince fans of his innocence yet. Reacting to the survey results, Te’o said if people knew him better, they would have a very different perception.

“People have their own opinions and I’m going to continue to do what I’m doing and let my play speak for itself,” he said, according to The San Diego Union-Tribune. “All that stuff doesn’t mean anything. Obviously those guys that voted for that don’t know me.”

The story of Te’o’s assumed girlfriend first gained national traction in 2012 when Kekua was presumed to have been in a car crash. She, or as the story went, recovered fully, but was then struck by leukemia. Most major news outlets wrote about Te’o’s apparent struggles as he was reported to be staying up all night on the phone with Kekua as she lay in hospital.

Then Te’o’s grandmother passed away, and within 24 hours, there was news that Kekua had apparently died, too. Within a few days of that, Te’o led Notre Dame to a victory over Michigan State with 12 tackles. Then, in January this year, the sports website Deadspin ran an investigation that found that Kekua had been a mere figment of someone’s imagination. Exactly whose head she was born in is not yet clear. While Te’o says he was merely a victim, not everyone has believed him. In his first road professional game ever, on Octboer 20 at Oakland Raiders, home fans in in the ‘Black Hole’ section at the stadium teased Te’o with a banner honoring his dead fake girlfriend.

Te’o, who was a second-round draft pick out of Notre Dame, missed San Diego’s first three games with a foot sprain. He made his debut in Week 4 at home against the Dallas Cowboys. When the scandal hit, Te’o was recognized as a consensus All-American, and with his eight national awards, was one of the most decorated college football players of all time.