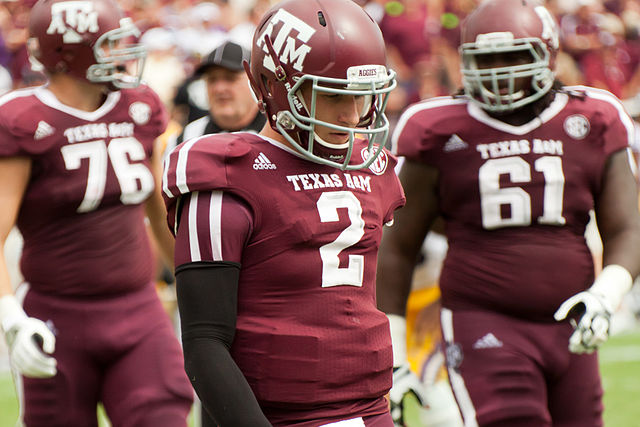 According to the NFL Network’s Albert Breer, Johnny Football scored a  32 on the Wonderlic Cognitive Ability Test, the preferred IQ-style test of the NFL. The score is a 50 question test, scored out of 50, that is to be finished in 12 minutes. For one reason or another, the preferred minimum score of an NFL team is 21. A score of 20 roughly correlates to an IQ of 100.

That means that Johnny Football’s not a moron. Or, rather, he’s good at standardized testing. What does this mean for his NFL career? The average score of all the quarterbacks poised to start in the NFL next year is a 29.2. So is Manziel smarter than the average bear? Possibly, but consider Kansas City’s Alex Smith, a decidedly mediocre player who scored a 40. Colin Kaepernick and Andrew Luck each scored a 37, according to ESPN. Missing from that list? The Manning brothers, one of whom scored a 39, the other being Peyton Manning (he scored a 28.) Ryan Fitzpatrick scored a 48, and is largely considered awful at football.

Against his peer group, though, Manziel looks a lot better — Breer leaked the scores for Teddy Bridgewater (20), Blake Bortles (28), and Jeff Mathews (40.) Breer later tweeted that he was “not saying it changes everything for Manziel. But he’s been thoroughly prepared for every step of the draft process. That helps his stock.”

Manziel, who ESPN and others expect to fall to the Minnesota Vikings — the team that needs a quarterback in the worst way imaginable — with the eighth pick in the 2014 NFL Draft. There have been questions about his maturity, the kind of questions that get asked when your face shows up on one of Drake’s shirts, and you’re the subject of a 6,000 word ESPN expose that flirts with the fact that you’ve got a drinking problem. Neither of which have much, if anything, to do with how well he’ll throw a football and call out audibles.

Come to think of it, a high Wonderlic score at the outset of an NFL career seems like it would only be useful if players were retested upon their exit from the league to see exactly what a life of pro football did to a participant’s IQ.  Not that Manziel will suggest this to them, not while he “has yet to step foot on an NFL gridiron, [and] his character is of the utmost significance,” as the National Football Post so eloquently put it. This is good for the Vikings, and good for Manziel. Hopefully he can hold it together in the last month before the draft.