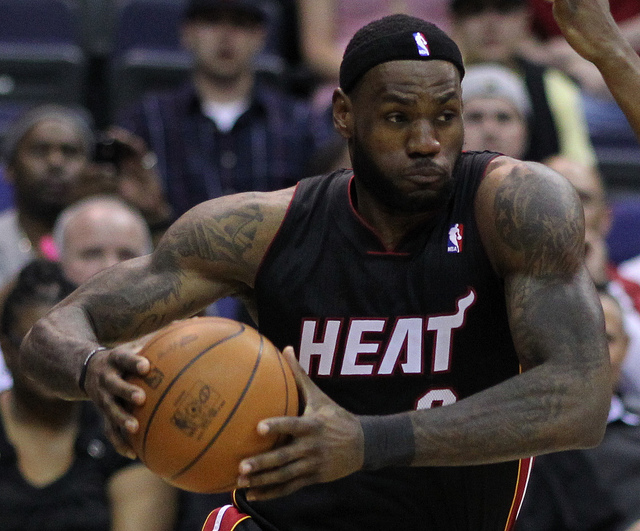 After word came down that the National Basketball Association wouldn’t allow Shelly Sterling, wife of controversial Clippers owner Donald Sterling, to maintain control of the franchise if the team owners – who collectively make up the Board of Governors – voted Sterling out of the league, some of the league’s brightest stars weighed in on the issue. Before the Miami Heat’s practice on Monday, LeBron James told ESPN that the feeling shared by NBA players was that they “want what’s right and we don’t feel like no one in his family should be able to own the team.” James included himself in that sentiment.

According to the NBA, Shelly Sterling will be barred from the league because “under the NBA constitution, if a controlling owner’s interest is terminated by a 3/4 vote, all other team owners’ interests are automatically terminated as well. It doesn’t matter whether the owners are related as is the case here. These are the rules to which all NBA owners agreed to as a condition of owning their team.”

Shelly Sterling granted an interview to ABC’s Barbara Walters, during which she let it be known that she was going to file for divorce “eventually,” and also that she would fight the decision legally if she was barred from ownership. “To be honest with you,” she told Walters, “I’m wondering if a wife of one of the owners, and there’s 30 owners, did something like that, said those racial slurs, would they oust the husband? Or would they leave the husband in?”

Shelly Sterling, who was captured on video pretending to be a health inspector as she visited tenants in the Sterlings’ real estate properties in an effort to allegedly — allegedly here meaning that the resulting lawsuit suggested — “harass and intimidate African-American and Latino tenants,” seems strangely complicit in her husband’s non-league-related racism in the almost 33 years since he bought the team.

According to The Daily Beast: “anybody who inspected the apartments under whatever guise would not likely have failed to notice that black and Latino tenants were being denied necessary repairs. Some were reportedly forced to live without working toilets or showers.” The publication also reported that “another strategy was to refuse rent checks from blacks and Latinos and then institute eviction proceedings against them.” Shelly Sterling was one of the witnesses who were deposed in the lawsuit, so it seems improbable that she wasn’t at least aware of the situation.

Around the league, the idea of Shelly Sterling’s ownership was treated with universal disdain from the players. “Those guys are not going to play for anybody (named) Sterling,” Magic Johnson told USA Today. “It’s going to be hard for them to sell that to the fans and definitely to the players.” Johnson, who has been linked to a possible sale of the franchise, continued by saying: “When they accused them of (being) slumlords, that was both, it wasn’t one person, it was both of them. They will never recover from this. All the sponsors pulling out, they will pull out for good if she is owning it. It’s not going to be the same.”

Rarely used Miami Heat wing James Jones, who is also the secretary-treasurer of the NBA Players Association, echoed Johnson’s sentiments to the Florida Sun-Sentinel. “No, that’s not something that’s acceptable to us,” he said. “That’s our stance, and it hasn’t changed, and it won’t. But all indications are that Adam is in agreement with the players and that they’ll do what is right for the league and the player.”