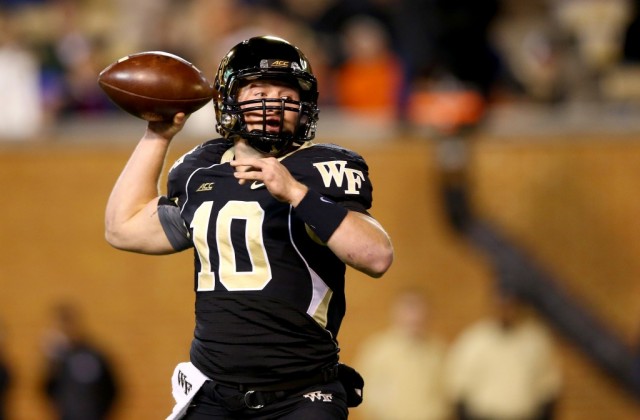 Unless you happen to be an alumnus or diehard fan of Wake Forest University, Saturday’s Virginia Tech-Wake Forest football game was one to forget. After all 60 minutes of regulation, the scoreboard read exactly the same as it did at the opening kickoff: Virginia Tech 0, Wake Forest 0. Of course, college football did away with ties back in the 1990s, so that meant a winner needed to be decided, no matter how painful the process.

And eventually, that’s what happened. The Demon Deacons prevailed, 6-3, in double overtime on a pair of Mike Weaver field goals, giving Weaver some redemption after he missed a potential game-winning kick on the final play of the fourth quarter. It was the first conference victory for Wake coach Dave Clawson and marked the first Wake Forest win over Virginia Tech in more than three decades.

The incredible lack of offense in Winston-Salem inspired us to go hunting through the record books to find the lowest-scoring games in college football in the past two decades. While CFB has had its share of even 2-0 games back in the run-heavy era 100 years ago, as well as more than a few low-scoring ties throughout the 20th century, we narrowed our search, with the help of Sports-Reference.com’s impressive database and season archives, to games in the last 20 seasons during which neither team even managed to equal Wake Forest’s paltry total of six points. Here is what we found, with contests listed in chronological order.

The story of a November 1995 game between Purdue and No. 13 Michigan in Ann Arbor wasn’t the teams on the field, but rather the conditions of the field. The Boilermakers and Wolverines played in a driving snowstorm, and neither team was able to find the end zone. When the dust — er, mud — had settled, the hosts escaped with a 5-0 win to improve their record to 8-2.

The Illini and Badgers played to a tie to end the 1995 regular season, with each team mustering just a single field goal. The 3-3 scoreline in Madison on Thanksgiving weekend is known as the final tie in college football before the rules changed to add overtime shortly thereafter.

The Kentucky Wildcats prevailed over visiting Indiana in a September 1996 non-conference game that nearly made it to the end of the fourth quarter without any points. UK’s Brian Johnson drilled a 26-yard kick through the uprights with 14 seconds left in the final period to give Big Blue its first win of the season. 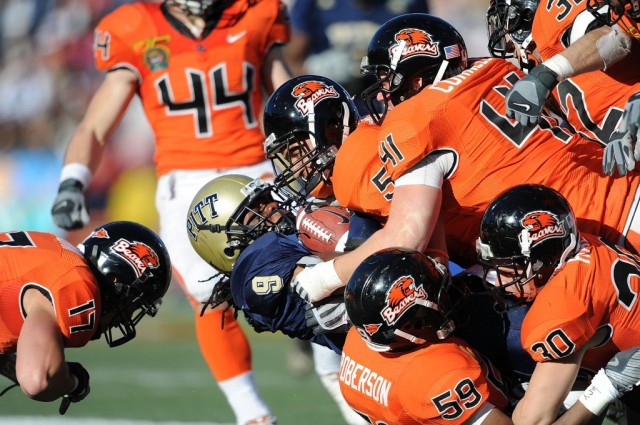 The Ole Miss Rebels escaped with a 3-0 victory over Memphis in both teams’ 1999 season opener at Liberty Bowl Stadium. The Deuce McAllister-led Mississippi squad gave new head coach David Cutcliffe a winning debut in his first regular-season game as the Ole Miss coach on a field goal by Les Binkley.

UAB kicker Rhett Gallego attempted three field goals against Southern Miss in September 2001. He missed all three. Golden Eagles counterpart Brant Hanna attempted two, making one. That ultimately proved to be the difference in a 3-0 Southern Miss victory that improved the Eagles’ record to, fittingly, 3-0.

The so-called “Holy War” between Utah and BYU went the Utes’ way in 2003 thanks to a 41-yard Bryan Borreson field goal in the second quarter. Borreson’s kick provided all the points first-year coach Urban Meyer’s team needed to beat the rival Cougars and clinch a Mountain West championship.

The last game before Saturday’s Wake Forest-Virginia Tech affair to finish regulation tied at zero came nine years ago, courtesy of Arkansas State and Florida Atlantic. The Red Wolves’ Eric Neihouse came through in overtime with a 21-yard field goal attempt to put the Owls away.

One of the better-known games on this list happened in 2008, as No. 9 Auburn survived Mississippi State’s upset bid in Starkville with an unconventional 3-2 win. Tommy Tuberville’s Tigers held Mississippi State to just 115 yards of total offense in the victory: “You can win a lot of games like that,” he said later.

For those football fans who tune into holiday bowl games to see lots of exciting scoring, they certainly had to have been disappointed by the 2008 Sun Bowl. The No. 24 Oregon State Beavers got a 44-yard field goal from kicker Justin Kahut in the second quarter against No. 18 Pitt — that was about it.