As the NCAA grinds through the backstretch of its regular season, college basketball fans start to look forward to March Madness in earnest, even if they’ve been waiting for it since the net got cut a year ago. At this point in the year, a handful of programs appear to have separated themselves from the competition, and from here, securing a one seed to open the tournament is almost a formality, assuming each of these schools wins out and puts on a strong performance through their respective conference championships. The four corners of the tournament, in case you need a refresher, are made up of the South, East, Midwest, and West regions, and we’ll examine the most likely top seed for each.

A No. 1 seed, however, is no guarantee for any particular team to steamroll the competition en route to the Final Four. Last year, one-seed Wichita State lost to eight-seed Kentucky in the second round. From there, only Florida went on to the Final Four as a top seed. This season, in contrast, has felt more top heavy, with the following four schools all but locked in for No. 1 seeds and deep runs through the 2015 NCAA Tournament.

Last year, the eighth seed Kentucky Wildcats lost the Final to seventh seed UCONN 60-54. The 2013-2014 Kentucky Wildcats started five freshmen. After the championship defeat, Julius Randle and James Young punched their tickets to the NBA, while both of the Harrison twins announced that they would be staying at Kentucky for another season. From there coach John Calipari, a mastermind of the one-and-done era, assembled yet another top tier squad.

Prior to this season, several notable analysts suggested that the 2014-2015 Kentucky Wildcats would emerge as the greatest college basketball team ever assembled – with nine McDonald’s All-Americans on the roster. True to form, Kentucky rolled into the last week of February undefeated, with a 27-0 record. This 27-0 run, however, included overtime slugfest wins against Ole Miss and Texas A&M, before close road wins in Gainesville and Baton Rouge. At 27-0, Kentucky has shown that it is good, but not invincible. Still, UK will likely take the top overall seed in the NCAA Tournament, even if it were to stare down an upset loss in the SEC. This year, the top overall seed will be routed through the Midwest region, on the road to the Final Four.

The Virginia Cavaliers have quietly emerged as the most dominant program within a re-engineered ACC that now ranges geographically from Boston and Syracuse to Miami and South Bend, Ind. Head coach Tony Bennett has emphasized defense, hustle, teamwork, and smart play in half court sets. Last year, UVA lost in the Sweet Sixteen to Tom Izzo and his Michigan State Spartans.

This season, the Wahoos own the best defense in college basketball, giving up only 50.5 points per game. In terms of seeding, the 25-1 Cavaliers did suffer a big home loss to the Duke Blue Devils last January. Duke, at 24-3, is now ranked fourth in the AP Poll. As such, Duke and UVA are due for a showdown in the ACC Tournament, for rights to the No. 1 East seed.

Last year, Wisconsin lost a Final Four heartbreaker to the aforementioned Kentucky Wildcats, then led by Julius Randle. To close out this nip-and-tuck game, Kentucky guard Aaron Harrison hit a dagger three with 5.7 seconds left on the clock. For 2014-2015, all starters returned back to Madison, with the exception of sharpshooter Ben Brust. Now, at 25-2, the Wisconsin Badgers have rolled through the Big Ten this season.

Senior center Frank Kaminski has emerged as one of the more intriguing draft prospects in recent years. Kaminski, a 7-footer, can wheel and deal in the post, and also step behind the three-point arc to torch defenses from deep. Kominski now paces Wisconsin with 18 points and 8 rebounds per game. For balance, Sam Dekker and Nigel Hayes are also double-digit scorers out on the wings.

Wisconsin may shift over into the South region, as Kentucky takes the top overall seed in the Midwest. If not, the Selection Committee will likely award Wisconsin with the two-seed in the Midwest. The Badgers must take home the Big Ten Championship, to ward off threats from Duke, Villanova, Arizona, and even a surging Kansas, for the No. 1 seed in the South. 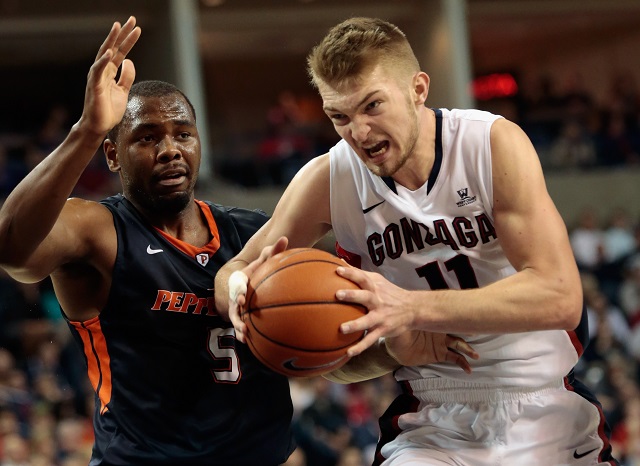 Last year, a 34-0 Wichita State earned a one-seed within the 2014 NCAA Tournament. The Shockers, however, went on to lose to Kentucky 78-76 in the round of 32. Still, the matchup further solidified the idea that a cohesive and experienced mid-major roster could hold its own against a basketball power stacked with one-and-done wunderkinds. This year, Gonzaga, at 26-1, has emerged as the most formidable mid-major in the Tournament field. Gonzaga may lock down a top seed if wins out to finish the WCC, while the power conferences slog through upsets within their respective tournaments.

Ironically, junior forward Kyle Wiltjer leads the Gonzaga Bulldogs. Wiltjer forced his way into the Player of the Year conversation, upon torching Pacific for 45 points this February. Kyle Wiltjer did transfer to Gonzaga after a 2012-2013 season that had him coming off the bench as sixth man for Kentucky. In recent interviews, Wiltjer has admitted that support at the mid-major has better helped him to develop his game and body, as opposed to the UK one-and-done mentality of stockpiling NBA ready talent. Wiltjer would have likely remained a role player, had he remained at Kentucky.