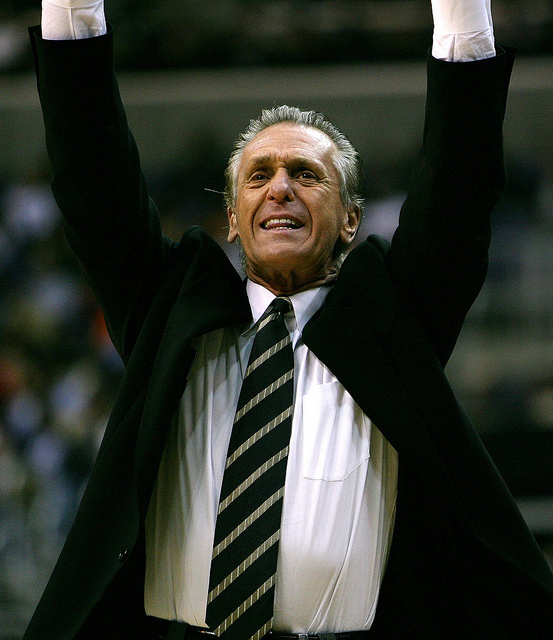 The man who inspired Gordon Gekko looked back on the summer of 2010 by reflecting on the preparation that it took before hand. “Dwyane [Wade] had accepted his extension [in 2006], and it was a three-plus-one,” Former Heat Coach and current General Manager Pat Riley told ESPN. “And it was Dwyane and LeBron James and Chris Bosh and Amar’e Stoudemire and a bunch of other guys that signed their extensions and they’re all three years with one option. And I [asked then-manager Andy Elisburg], ‘Well, who are the other guys?’ And he gave me the list. And I said, ‘Well, we’re going to be players in 2010.’”

Riley, who rose to fame as the coach of the Showtime Lakers after an unremarkable run as an NBA player, reminisced about how the team had cleared the books in order to make a strong push at the stacked free agency class. “Everything we did from 2006 to 2010 was to be able to sit down at the table with LeBron and Chris and Amar’e and Boozer and Mike Miller,” Riley recalled. “We were fortunate that they came, but we also planned for it.”

With the Miami Heat potentially poised to have over $70 million tied up in just seven players for the 2014-2015 (James, Wade, Bosh, Udonis Haslem, Chris “Birdman” Anderson, and Justin Hamilton), it’s going to be a tight squeeze to build the required twelve-man roster. And that’s Riley’s greatest challenge — now that he’s assembled the Heatles and watched them win, can he keep the band together?

“You have to have a big-picture approach. That’s what I do best; I try to see the big picture. Look at the reward they have. They got exactly what they wanted. Look at where they were before and look at what’s happened to them,” Riley said to ESPN. “It would be very hard for me to think anybody would walk away from the possibility of making this a long-term happening that can go for 10 or 12 years.” With Bosh, Wade, and James all stating that they will most likely stay in Miami, Riley’s job is to convince other players to check their egos at the door and come in around the edges to play fourth, fifth, and sixth fiddle while filling in the cracks.

The luxury tax threshold for the 2013-2014 season was $71.7 million, per NBA.com. Teams that are into the luxury tax are unable to offer players the same kind of contracts as teams below the threshold and are reduced to committing to the veteran’s minimum, rookie deals, and what’s called the Mini-MLE, or mid-level exception — about $3 million a season. But Pat Riley remains confident that the Heat will keep their Big Three together and remain a destination squad, even if the financial incentives aren’t quite as high.

“With our three guys, we hope that this turns into a generational team,” Riley said. “And that it’s not just we’re at the end of this four-year run right now because players have some options this summer.”