In April, if someone told you Justin Turner would bat cleanup in a postseason elimination game for the Dodgers, you would have done a spit take or otherwise scoffed at the idea. Well, Turner not only hit fourth for L in the NLDS loss to the Mets; he was the main reason the boys in blue lasted that long. File that away among the positives when determining Don Mattingly’s performance as skipper of the losing club.

Other things did not go well for Mattingly, like playing the injured Yasmani Grandal twice or the ineffective Carl Crawford early in the series. But in the end, the players on the field determined the Dodgers’ fate this series, and Game Five featured several plays that proved crushing in the final outcome, a 3-2 win by New York and a ticket to the NLCS versus the Cubs. (Some mistakes, like the first inning error in left field, went unpunished.)

Here are three key blunders that drove this Dodgers club to its demise in the final game of the 2015 NLDS. 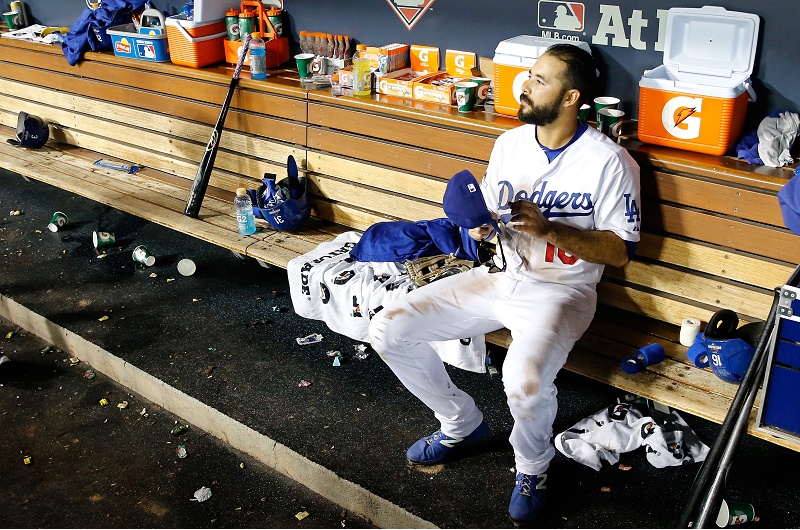 Andre Ethier contributed a big RBI with a bloop single in the first and later had a huge catch in right, but he was in the middle of several bad plays as well. Following a Turner double to lead off the third, Ethier had a weak at-bat that ended in a short popup to left and no advance for the runner. Turner, who wanted to will the Dodgers to victory on his own, stole third base to compensate, but never made it home. Afterward, Ethier was seen on TV yelling at Mattingly in the dugout. At-bats like this one set the tone for teams in big games, and Ethier failed to get his man to third or drive him home. Causing a scene afterwards made it worse.

2. The lapse that gave Murphy 3rd base

In a game that mainly seemed like Justin Turner versus Daniel Murphy, the Mets’ clutch 2B got the edge with his swipe of third base in the fourth inning. With the defensive shift pulling Turner to the right side of the diamond, the Dodgers failed to cover third after a Lucas Duda walk. This mental lapse was punished by the heads-up baserunning by Murphy, who scampered to third without a play. He brought the game to a 2-2 tie when he trotted home on a Travis d’Arnaud sacrifice fly. The Dodgers never led again.

Once Murphy took third base in the fourth inning, it was Greinke versus d’Arnaud with runners on the corners and one out. The Dodgers’ 2-1 lead hung in the balance. On an 0-1 pitch, d’Arnaud lofted a fly ball to deep right that Ethier caught in foul territory, allowing Murphy to score the tying run. It may be a risk some do not like to take, but Ethier’s play there was to let the ball land foul and have it count as a strike.

Greinke would have had an 0-2 count on d’Arnaud to try and strike him out or get him to ground into a double play. Of course, there no guarantees Greinke would get him, but you have to like his chances. The way it played out, the tying run was guaranteed to score once Ethier gloved it in right field.  Following a game-changing blunder by the infield, letting the ball go foul would have given a hot pitcher the chance to rectify the situation. As the senior member of the Dodgers with the season in the balance, the play for Ethier was to take the gamble. He passed, and Murphy’s home run eventually sealed the deal for the Mets.