Do you miss the days when Albert Belle bowled over hapless infielders and mound-charging was as common as extra-inning games? If so, you’ve come to the right place.

Major League Baseball has gotten progressively more mannered over the past decades, and some fans missed the wildness and uncouth actions of ballplayers of the past. Yes, better athletes play better baseball in better stadiums with better conditions than before, but in some ways baseball has lost touch with its unkempt roots from country hardball.

In our continuing series on the cheaters, brawlers, and otherwise scandalous individuals of baseball history, we focus on some of the wildest moments in the game’s unruly past. Here are five of the craziest events in the grand old game’s history.

The year was 1951, the team was the St. Louis Browns, and the team’s owner the legendary Bill Veeck. To Veeck, there was no point in having a bad team take the field without anything interesting for fans, so he took his awful squads and made them players in a carnival of his own devising.

At one point, Veeck had ushers hand out signs reading “YES” or “NO” to fans at the gate so the manager would know which moves to make on the field. (Veeck forced managers to heed the decisions of the crowd.) However, Veeck is best known for one insane stunt in which he signed Eddie Gaedel, a 3-foot-7 midget, to pinch hit during the second game of a Browns doubleheader.

Before heading out to bat (wearing uniform No. 1/8), Gaedel popped out of a cake on the field. He then took four consecutive pitches in what was reported to be a 1.5-inch strike zone (each pitch was high). As recounted at the 2:13 mark in this clip from Ken Burns’s Baseball, Veeck told Gaedel he should by no means swing, and claimed he would have a sharpshooter with a rifle trained on him while he batted. If Gaedel swung, he would be shot, so the story goes.

Gaedel took his base — slowly, doffing his cap to the adoring crowd at several points — before being called back to the dugout for a pinch runner. In fact, the moment became as poignant as madcap, as it was the last time Gaedel would ever appear in a Major League ballgame. Asked what is was like hearing the roar of the crowd, Gaedel said, “Man, I felt like Babe Ruth.” 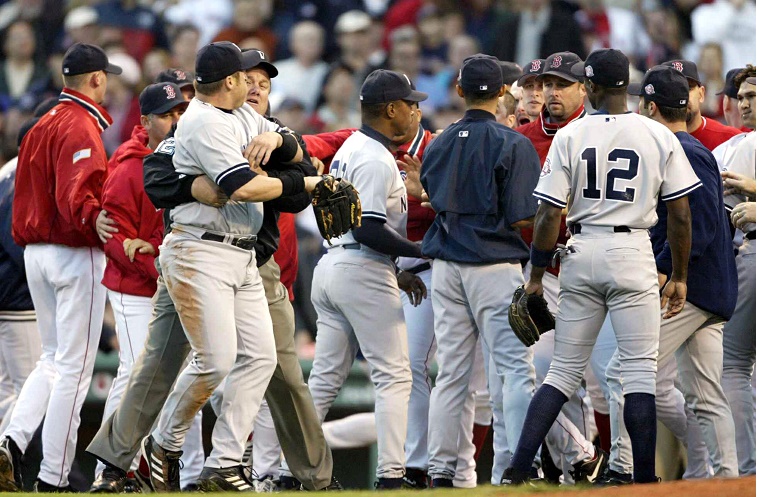 Those who miss the Yankees-Red Sox battles of yore point to games like this one from the 2003 ALCS. For a second, imagine a bench coach running out of a dugout to attack the opposing team’s star pitcher; a visiting outfielder jumping into the home bullpen to do battle with a stadium employee; and multiple other crazy events in the middle of the third playoff game in a hotly contested series. (Somehow, no one was ejected from this game.)

Sounds like a fairy tale, right? Well, this was your 2003 ALCS, where Pedro Martinez cravenly decked a charging Don Zimmer, Yankees outfielder Karim Garcia assaulted a Fenway groundskeeper, and Jorge Posada joined Manny Ramirez and Roger Clemens in threatening the lives of several people in attendance. It was vintage Yankees-Red Sox with palpable hate in the air and the on-field violence to prove it.

“We’ve upgraded from a battle to a war,” Boston manager Grady Little said at the time, and the stakes could not have been higher. For Boston, the franchise was still in the middle of its 85-year World Series drought, while the Yankees were trying to hold the line against its most bitter rival. Fights had been common; bench coaches and employees coming to blows with players signaled a new standard had been set. War, indeed.

The year was 1974, and the Cleveland Indians were an awful team trying to get bodies in the stands at Municipal Stadium. Management proposed bringing the “10-cent beer night” promotions that were popular in the game that year. For 10 cents (plus a 50-cent ticket for the bleachers), fans got a 10-ounce beer for their enjoyment.

According to the record, many fans drank their fill of 10-cent beers that particular night. Early on in the game, a respectable middle-aged woman entered the field and tried to kiss the home plate umpire. Later, a man streaked across the field wearing a single black sock. Naked women were seen at various points of the evening.

Then things spiraled completely out of control. A Rangers player was struck by one of many flying objects Cleveland fans launched from the stands. Rangers manager Billy Martin (never one to shy away from a brawl) instructed his players to arm themselves with bats and take to the field. Soon, fans and players were scrapping on the field with makeshift weapons. It went down as one of the most ill-conceived promotions in professional sports history.

There’s more Billy Martin in this wild episode from 1983. Martin, at that point in one of his managerial stints for the Yankees, apparently knew Royals great George Brett was using a bat with an illegal amount of pine tar on the barrel. However, he waited until Brett drilled a go-ahead home run to right before alerting umpires of the violation.

The buildup is slow up to the 2:40 mark of the video, when umpires call Brett out, effectively taking away his home run. The slugger explodes out of the dugout in protest as if he had been set on fire. This incident from 1983 marked one of many episodes that colored the rivalry between Yankees and Kansas City teams of the era.

Brett’s reaction is legendary for its unbridled rage. To some modern fans, it’s the passion they miss when they watch players from opposing teams joking with one another on the base paths mid-game. It’s impossible to imagine Brett and one of the Yankees in such a situation back then.

This preposterous moment in baseball history came from the mind of Mike Veeck, son of the same Bill Veeck who once sent a midget out to bat leadoff for St. Louis. Mike was in charge of promotions for the White Sox and, in 1979, decided to kiss the Disco Era goodbye with what he termed “Disco Demolition Night.”

Hoping to sell an extra five or ten thousand tickets, the promotion invited fans to enter the park for 98 cents if they brought a disco record along to be destroyed. Veeck planned to have a local DJ blow up the records between games of a doubleheader, ritually ending the music’s legacy. Instead of the 12,000 or so expected, the White Sox ended up with over 50,000 fans (some said 70,000) at the park.

Things got ugly when the records exploded into flames. As you can see in the video, fans stormed the field upon the records’ demolition, overpowering security and destroying the rest of the grounds before riot police could arrive. Bill Veeck stepped in on his son’s behalf and blamed hooligans who “weren’t real baseball fans” for the incident. But wasn’t the point to get bodies — any bodies — into the stadium? In that sense, the wild mission was very much accomplished.

Disco, for its part, continues to live on.