With the gentlemanly St. Louis Cardinals and unassuming San Francisco Giants dominating so much World Series play in recent years, one might argue the Fall Classic has been experiencing a villain shortage. Whatever real or imagined veneer existed came crashing down during Game 2 of the 2014 Series when a hotheaded young Giants reliever brought some fear and loathing to the MLB postseason. The dose of animosity was much-needed after lightning rods Bryce Harper and Yasiel Puig exited the stage, and may inspire the animated Kansas City fans further if the series returns to Kaufmann Stadium.

Game 2 of the series was knotted in a 2-2 tie when the fateful bottom of the sixth arrived. A Billy Butler single made it 3-2 Royals with men on first and second when Hunter Strickland entered the picture. Strickland, the Giants reliever known for triple-digit fastballs and between-pitches aggression, promptly uncorked a wild pitch to put both runners in scoring position. Salvador Pérez doubled into the gap to make it 5-2 while Strickland screamed into his glove and glared toward the outfield, possibly at Pérez pulling into second. Then Omar Infante got hold of one.

Infante’s two-run homer opened up the score 7-2 and caused a strange incident at home plate. As Strickland glared at home, Pérez paused on the dish and made a gesture to signify he didn’t like Strickland’s scare tactics. After a bit of miscommunication, Strickland could be seen mouthing what appears to be: “In the dugout, boy!”

By that point, civilized discussion was out of the question. The timing left Pérez standing on home plate before Infante scored, a situation that forced the umpire to push Pérez off so Infante could touch his fourth base. Then Royals and Giants started to file out of their respective dugouts before order was restored. But the energy level was soaring by that point. 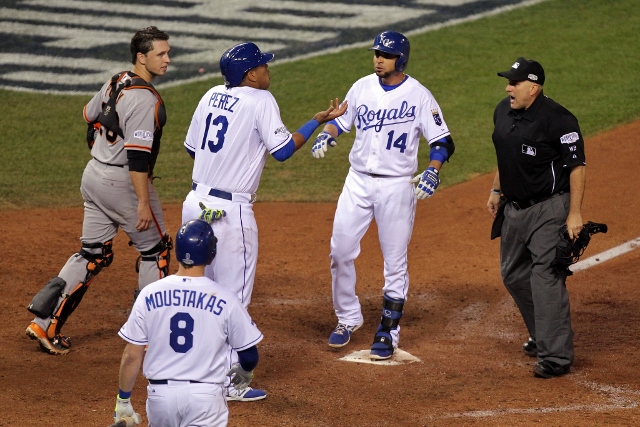 Baseball isn’t football (or hockey or basketball, for that matter), and the entire tone of Game 3 will depend on starters Jeremy Guthrie and Tim Hudson. “Momentum is the next game’s starting pitcher,” as the saying goes, but there is no question the Royals’ blood is up along with the young team’s confidence level ahead of a pivotal Game 3.

The Giants are heading back to the cozy confines of AT&T Park, home to so many triumphs of recent World Series’ pasts. Tim Hudson has been hit hard in nearly every appearance (save a key one against the Nationals in the NLDS) since the start of September, but is the epitome of a seasoned veteran. Guthrie was solid through five innings against the Orioles in the ALCS.

In other words, Game 3 and the World Series are completely up for grabs. Strickland, who Giants skipper Bruce Bochy called “a really intense kid,” has now allowed a record 5 HR in the 2014 postseason. Chances are slim Bochy will allow him to surrender another, but Strickland has already done his job. He’s returned a villain’s presence to the Fall Classic. Maybe Harper and Puig won’t be missed after all.