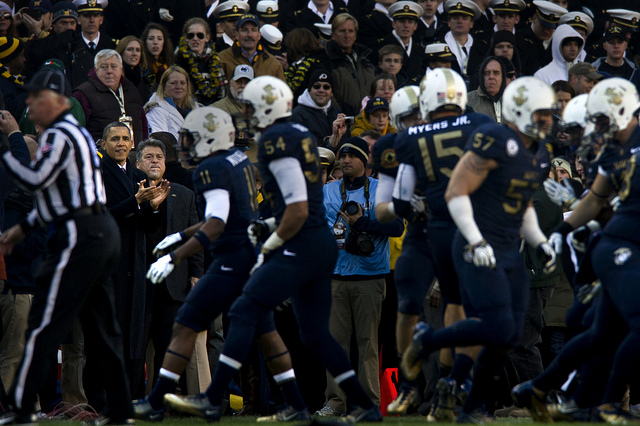 Days after collapsing into a coma during a spring practice session, Navy running back Will McKamey, 19, passed away at Baltimore Shock Trauma Tuesday night. McKamey, a freshman, had previously sustained an on-field brain injury in 2012 “after a hard hit as he scored a touchdown for Grace Christian Academy,” reported CBS Baltimore.

According to a statement released by the family on Monday, McKamey’s Saturday collapse was not the result of any extraordinary practice circumstances. “Will did not sustain a bad hit or unusual or extreme contact,” the statement read. “The Navy coaches have poured through the films of practice and seen nothing more than Will carrying the football normally, doing what he truly loves.”

McKamey, who redshirted 2013 owing to the earlier brain injury, graduated last year from Grace Christian Academy, where he majored in oceanography. During his senior year the football player ran for over 2,000 yards under the watch of his father, Head Coach Randy McKamey.

When the story initially broke over the weekend, there was some debate about whether McKamey should have seen the field after his 2012 injury. The family elaborated on the situation and the decision making behind allowing him to return to the game.

“Since his prior accident in 2012 Will has been seen by four different neurosurgeons,” the family explained.”He had 4-6 CAT scans and MRIs to rule out any issue and clear him for contact. After his prior incident he went without any contact for over nine months to just be safe. We feel obviously there is more going on in his brain than we could have ever detected. I want to be clear that the Navy football program nor us as his parents would have ever allowed him to be in a dangerous situation.”