“I think I figured out why [Shaq] does rub lotion on his body all the time,” Charles Barkley told Conan O’Brien Thursday night. “That’s only so he can get his fat ass into the building.” That was the last thing the Round Mound of Rebound was had to say about his Inside The NBA co-host. He was kidding, of course, but he took some umbrage with Shaq’s voluminous endorsement deals.

“He’s got too many endorsements,” the Hall of Famer said about the other Hall of Famer. “And you know he’s got the lotion. They show our commercials when we’re on television, so when we’re not on during the game we sit in the green room and he’s on every five seconds rubbing lotion on his fake body.”

Inside The NBA has won 5 Sports Emmys for Outstanding Studio Shows. It features Shaq, Chuck, Kenny ‘The Jet’ Smith, and Ernie Johnson, as well as a rotating cast of NBA players, both current and former, including other analysts. The Show has garnered a cult following for its equal dishes of smart basketball talk and shenanigans. It is must-watch if only to see what happens. 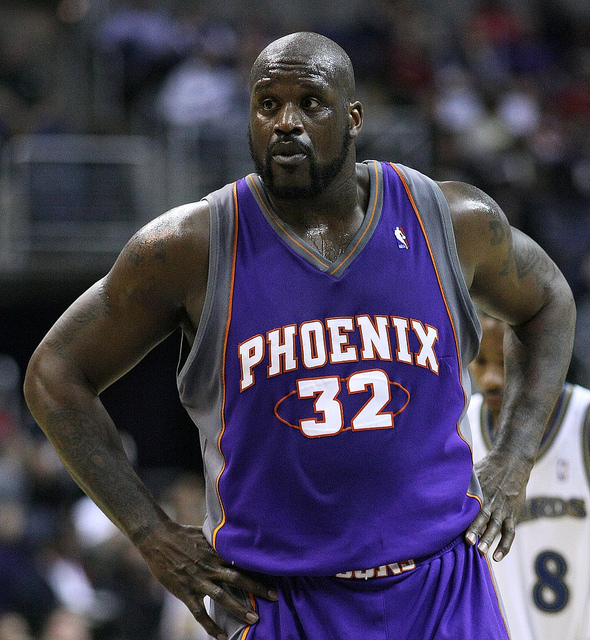 O’Neal recently came under fire for some in-studio hijinks that went wrong, as he was named in an investigation behind a Turner Sports employee’s 2013 injuries. Shaq has not been charged. In a mildly unrelated note, Shaq is also responsible for the ‘charge circle’ underneath the NBA baskets where a charge becomes a blocking foul. The more you know.

Barkley, who has been with Inside The NBA since the 2000-2001 season, was thrown over a couch by O’Neal earlier this year. The two players have had a relationship that tilts between rocky and friendly for the majority of their professional careers — at least, since Shaq entered the NBA in 1992.