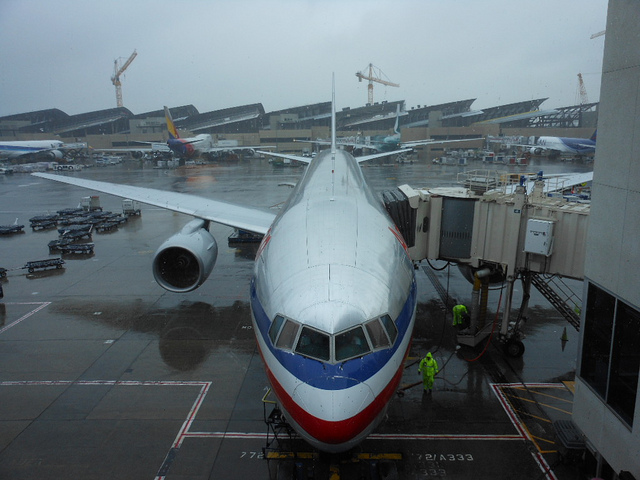 Troubled San Francisco 49ers linebacker Aldon Smith was arrested on Sunday as he attempted to board a plane at Los Angeles International Airport. He was charged with making a false bomb threat. Smith — who had been drinking before the boarding call, according to airport police Sgt. Karla Ortiz, per The Sacramento Bee – last made headlines after leaving the 49ers to voluntarily check into rehab for alcohol abuse.

“At approximately 1400 hrs, a 24 year-old Aldon Jacarus Ramon Smith, a resident of San Jose, California, was going through Terminal 1 screening where he made a comment indicating that he was in possession of a bomb,” read an official statement from LAX, released shortly after the arrest. “Los Angeles Airport Police made contact with him in the gate area where he became uncooperative. After conducting their investigation, LA Airport Police took suspect into custody and transported him to LAPD-Pacific division where he was booked for California Penal Code 148.1(a) – False report of a bomb threat.”

Commenting on Deadspin’s coverage of the incident, former National Football League punter Chris Kluwe said, “a lot of NFL players believe that consequences are something that happens to other people, and they’ve been shown nothing to suggest otherwise their whole life.” Kluwe last played for the Minnesota Vikings in 2012, when he was released amid a flurry of controversy.

Above is footage of Smith’s detainment, courtesy of TMZ. While the NFL has yet to weigh in on the issue publicly, the possibility of Smith avoiding some kind of suspension or other reprimanding action looks slim, at best. While commissioner Roger Goodell did not suspend Smith for any of his earlier transgressions, the league has not been among the most compassionate of institutions when it comes to players who refuse to toe the line.

Speaking to the San Francisco Chronicle before his return to the team in November, Smith addressed his problems with a common AA refrain. “I’m just taking it one day at a time. Getting back here. Being around the guys. And just getting my life back at home. I’ve got a 10-month-old son, so I’m doing the father thing. So I’m just trying to make sure I’m all ready to go,” he said at the time.