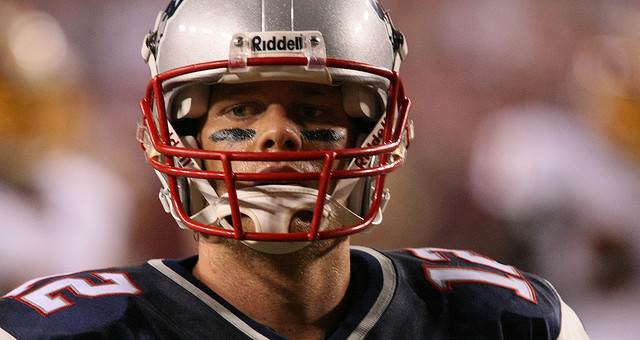 The self-proclaimed Worldwide Leader in Sports, ESPN recently made waves when they declared that Tom Brady was no longer one of the five best quarterbacks in the NFL. Brady, the face of the New England Patriots, has been an NFL superstar since he replaced Drew Bledsoe as the starting QB and promptly led the team to their first Super Bowl victory in 2001. In what has become the rote retelling of a legend, Brady was famously picked with the 199th pick in the NFL draft the year before, using a pick the Patriots had received as compensation, and is arguably the most valuable player ever, relative to his draft pick. Myth and legacy, of course, have little to do with how a player is going to perform in his fifteenth season, which is kind of the point of the ESPN article: Tom Brady’s going into the Hall of Fame, but he might not be one of the five best taking the field today.

So should New England prepare the funeral pyre for Tom Brady’s career, or have reports of his game’s death come a few breaths too early? The answer, really, depends on how you feel about the house that Belichick built. If you’re on the side that says they’re a band of dirty cheaters who rightfully haven’t won anything since the league caught on to their game back in 2004, you’re more than happy to see him fall off the list. If you’re one of the fans that make Brady one of the most popular athletes in the country, you’re thinking about how he restructured his contract to give the Pats more room to sign free agents, then saw his top five receiving targets go everywhere except the football field, as they went to prison (Hernandez), the operating room (Gronk), the Broncos (Welker), San Diego (Woodhead), and the couch (Brandon Lloyd was released in March of ’13, and didn’t land on an NFL roster until over a year later, signing with the 49ers in April.) Brady was playing with table scraps when he’d been promised a four-star meal.

The truth is, as it usually falls, somewhere in the middle. At this point, Brady — similarly to his ‘rival’ Peyton Manning — is somewhat coasting on reputation. Those two are, arguably, the two premiere quarterbacks in the game, with Manning taking the edge after his incredible 2013 campaign with Denver. The question, really, becomes how the field breaks down: where you fit Brady in to the tapestry with Drew Brees, Aaron Rodgers, and the other top flight quarterbacks.

Since, regardless of the self-perpetuating news machine that is ESPN, you can’t compare someone like Russell Wilson to Tom Brady. At least, not yet.  We have yet to see if it was a real, honest decline, or if it was a systemic aberration; remember Drew Brees’ 2012 campaign when they went 7-9? You could easily recast his efforts as ‘empty stats,’ because Brees has posted roughly the same (incredible) numbers for the last three years, even as the team’s fortunes have changed. That would be missing the point. Brady played worse last year, but he was making plays with guys no one had paid any attention to last year, and a nonexistent offensive line.

Or, as Cleveland Browns Head Coach Mike Pettine told The Monday Morning Quarterback, “It’s beyond ridiculous. Top five? I mean, to me, it’s one and two (Brady and Peyton Manning) and then there’s a gap and then it’s probably (Drew) Brees and (Aaron) Rodgers would be three and four, however you want to order them. Until those two (Brady and Manning) retire, they’ll be one and two and then there will be a gap.”

So relax, Patriots fans. Put down the casket, Patriots haters. We’re still a little ways away from the Jimmy Garoppolo era.