The 2015-16 NHL season is pure heaven for hockey fans who like to keep an eye on developing talent. More than 70 rookie players have hit the ice for at least one NHL game early this season. Fans can expect that number to grow. As the season progresses, more young players will develop in the lower leagues and injuries will mount across the league.

Not all of the rookie players who take an NHL shift this season will become regular players. Even fewer will develop into NHL All-Stars. However, watching those select rookies develop from fresh-faced kids into grizzled veterans is something fans look forward to every season.

The players that develop into stars in their first NHL season will be in the running for the Calder Memorial Trophy, an award the NHL has given out in some form to the best first-year player in the NHL since the conclusion of the 1932-33 season. The award is named for Frank Calder, president of the NHL from 1917 until his death in 1943.

Parsing the top contenders for the 2015-16 Calder is not an easy task, but here are the top five players we think will be in the running for best rookie at the end of the season — ranked from least to most probable.

The Chicago Blackhawks have not had high picks in the last few drafts, but that’s what success will get you. In fact, Chicago has not had a top-10 pick since they selected Patrick Kane first overall in the 2007 draft. With that type of success, the team has to get creative with their signings.

Over the summer, the Blackhawks signed 23-year-old Artemi Panarin to a two-year deal. Prior to the signing, Panarin spent seven years playing in Russia’s KHL, where he scored 183 points (76G, 107A) in 263 games. Panarin is a fully developed player at this point in his career and has found immediate success in the NHL. Playing on the Blackhawks second line with potential NHL scoring leader, Patrick Kane, does not hurt Panarin either, as defenses tend to focus on the 2013 NHL playoff MVP, leaving Panarin space to operate. 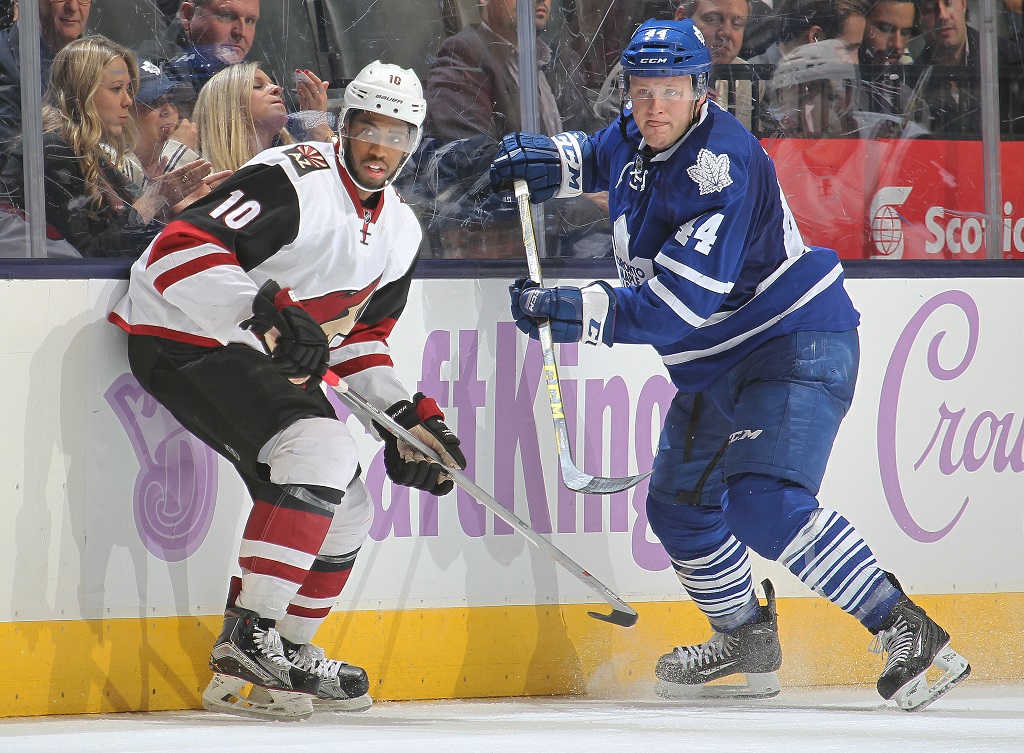 With the 80th pick of the 2013 NHL draft, the New York Rangers selected Anthony Duclair. He played 18 games for the Rangers last season, scoring seven points before the team returned him to the Quebec Major Junior Hockey League, where he totaled 26 points (15G, 19A) in 34 games.

In the offseason, the Rangers moved Duclair to the Arizona Coyotes in a trade they may regret if Duclair continues to develop into a potential NHL star. He is among the leading rookies in goals scored this season and along with fellow Coyotes rookie, Max Domi, has a team that many picked to finish last in the NHL. The big questions behind 20-year-old Duclair: maturity and coach-ability.

The last name Domi is not one NHL fans usually equate with goal scoring. Between 1990 and 2006, Domi was a name associated with fights, penalty minutes, and the occasional goal. That’s because Tie Domi, father of Arizona Coyotes rookie, Max Domi, racked up 3,515 penalty minutes in 1,020 career NHL games while scoring a total of 245 points (104G, 141A). Don’t expect Max to follow in his father’s footsteps.

The Buffalo Sabres selected Jack Eichel with the second pick in the 2015 NHL draft, and the team is not wasting any time getting him in the mix. Eichel’s average time on the ice per game so far this season is 19:31. That’s a full minute more than the next rookie forward on the ice time list.

This shows that Sabres coach Dan Bylsma believes in the 18-year-old as he plays him almost as much as veterans Evander Kane and Tyler Ennis, and more than team captain Brian Gionta. Eichel is a physically strong player with a good hockey IQ. He’ll be a star for years to come in the NHL, and his abilities will soon allow him to shed the tag of the player who is not Connor McDavid.

The last player to enter the NHL with as much hype as Connor McDavid was Sidney Crosby. Yes, that Sidney Crosby — the Pittsburgh Penguins star center who has a list of awards longer than most people’s grocery lists. Suffice it to say, hopes are high for McDavid, who was chosen first overall by the Edmonton Oilers in the 2015 entry draft.

McDavid looks like he is the player scouts thought he was. The 18-year-old is strong and fast on his skates and can make plays at full speed. It may be too early to make this claim, but McDavid is a game changer — quickly separating himself from the rest of this year’s rookie class.