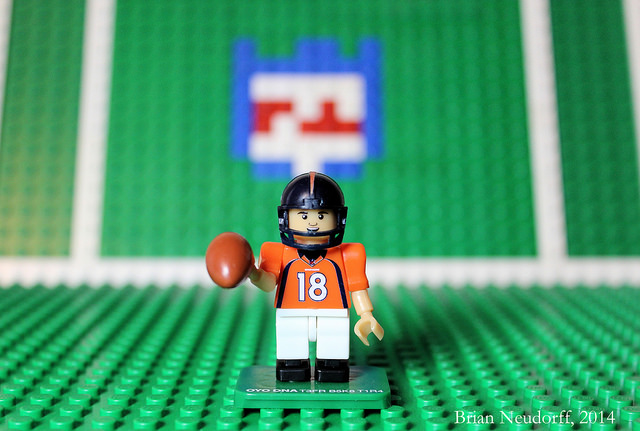 Peyton Manning, fitting into the routine of the Peyton Manning archetype, had himself a great regular season — a beyond great regular season, if we’re being honest – and then proceeded to get trounced, badly, in the 2014 Super Bowl. Manning, no stranger to television even in his downtime, appeared on the Late Show with David Letterman on Monday night to talk about things. Football things. There is a popular theory that Manning is secretly a biogenetic machine designed to live, eat, and breathe football. Regrettably,  Letterman did not address that in his sit-down.

He did, however, touch on Manning’s season-ending neck surgery in March 2011, the one that saw the quarterback lose his gig in Indianapolis and cause many inside and around the NFL question whether he’d even be able to play again. “I’m not at a hundred percent compared to what I was before my surgery,” Manning said (the full clip is here). “But I have made strides each season and this year felt a lot better than I did the year before. These nerves just go at their own pace.”

The future Hall of Famer continued, saying that while doctors and other surgery recipients had prepared him for the unpredictable nature of recovery and that he might wake up one day and feel better than he had in years, that day hadn’t shown up yet. “Today’s not the day,” Manning said to Letterman, describing the inevitable daily disappointment. He also described the differences in his game from the outset of his career, saying that he was more cerebral with his  play now that he couldn’t make the throws he could in his youth.

Manning also sounded off on the high-quality microphones used by the NFL in its broadcasts. He’s not a fan. After being prompted by Letterman about the newly relative ubiquity of “Omaha!” — long a Manning audible — the quarterback explained his distaste to the audience: “I don’t like it. It reveals terminology that the other opponent that you’re going to play next week can use, and I don’t like Bill Belichick hearing our plays.”

The quarterback, whose sense of humor has been quietly understated throughout his career, quickly offered a solution. “You just gotta get up there and say some really negative things about the commissioner, Roger Goodell. Blue-20, Blue-20, Roger Goodell is a no good you-know-what, and they’ll just turn the volume right down.” Letterman pointed out that Belichick used his own microphones, but Manning didn’t rise to the SpyBait. And, no, Peton hasn’t thought seriously about retiring, but if the Broncos say it’s time, he’ll probably go with it. Because he’s Peyton Manning — always amicable.

As for the Super Bowl? His full thoughts are here, but Manning gave the nod to the Seahawks. “We had a great week of preparation,” Manning said, “but it didn’t go our way. Seattle played a lot better than we did, and they were the better team that night.”