While the 2002 Winter Olympic Games were held in Salt Lake City, the last time the IOC saw fit to give the United States a Summer Olympic Game was nearly twenty years ago, in the year 1996, when the Games were held in Atlanta, Georgia, most remembered as the cite of the Centennial Olympic Park bombing. Now, with the bids for the 2024 Olympics coming up for review, the United States Olympic Committee has received the go ahead from several athletic competition governing bodies to nominate another U.S. city for the 2024 games — something the USOC didn’t have when they tried to convince the IOC (the International Olympic Committee) to hold the 2016 Summer Olympics in Chicago. That’s a lot of committees, and a lot of appeasing, but the important thing is that the USOC has already narrowed down their prospective choices to just four cities.

What are they? In alphabetical order, the potential 2024 Olympic landing spots in the U.S.A. are Boston, Los Angeles, San Francisco, and Washington, D.C. No, Chicago isn’t being considered. Yes, that’s kind of a drag. Especially, and maybe only for, people who wanted to see the Olympic Games in Chicago (and people who wanted the Olympic era construction of the city to actually be put to a purpose, rather than just happening for the sake of happening).

On the other hand, this allows us to examine which cities would ultimately be the best landing spot for the Games, something that bears considering, since fewer and fewer places want to do it at all. 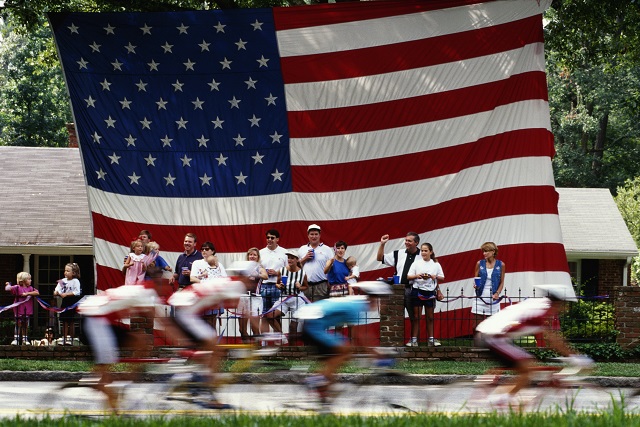 Coming in last place on this list, but first place in our hearts, is Boston. The Massachusetts state capital doesn’t even have its own committee out raising awareness for the people who are interested. Googling ‘Boston 2024 Olympics’ will, instead, bring you to NoBostonOlympics.org, where you can link to information about which Boston 2024 boosters are “myopic elites,” and whether or not the Olympics will actually bring the city any money. The IOC is, beyond a shadow of a doubt, a shady institution, so we applaud the proclivity of anti-Olympic sentiment behind the group, even if it means that Boston’s probably eliminated from the discussion.

Coming in at number three is San Francisco, simply because the tech bubble might melt down into a viscous digital miasma of self-importance if the Bay Area was going to be Ground Zero for the 2024 Olympics. On second thought, that could be pretty cool to see. In all seriousness, though, one regional columnist described the likelihood  as “odds are 99-1 against the games ever happening here. Admittedly, those are unscientific odds. They are based solely on my four decades of covering the Olympic landscape. The actual odds could be much worse.” We’re with him.

Which leaves Los Angeles and Washington, D.C. — the commercial capital of the country (sorry New York) and the real capital of the country. Unfortunately for L.A., it’s already hosted the Games twice, in 1984 and 1932, so we’re not so sure it will get the tip of the hat this time around. Also, as a real dealbreaker, the D.C. enthusiasts are so stoked on the idea that they have a website. We’re suckers for nice web design. The 2016 city will be Washington D.C., and you can bet your local representative on it.