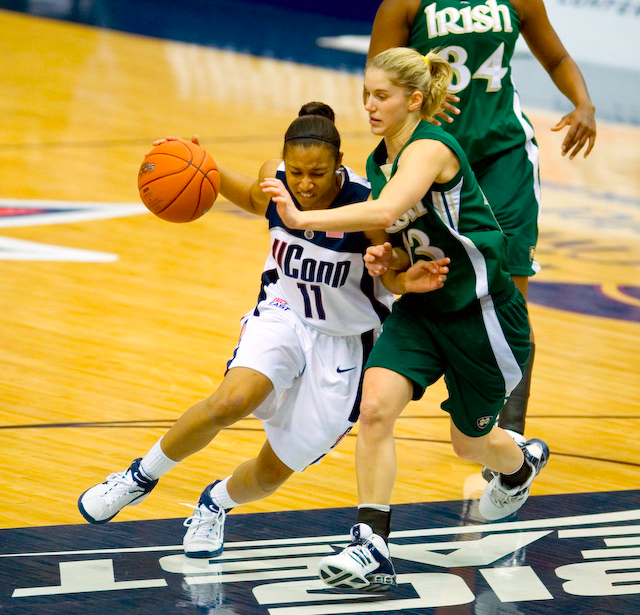 When March Madness kicked off last week, the nation was in a basketball craze. Between Thursday and Sunday there was rarely a moment when an NCAA Tournament game wasn’t on TV, and the games were electrifying. But it wasn’t just men — the women’s NCAA Tournament started on Saturday, too. Sure, there aren’t millions of brackets submitted for the women’s games and there certainly wasn’t a billion-dollar challenge for making the perfect women’s tournament bracket, but that doesn’t mean anything less is at stake.

The goal of raising a title banner and cutting down the nets in early April is the same for the women as the men. But the game’s parity is where the two differ. Whereas the men’s tournament has exemplified a field of teams in which anybody can beat anybody — evidenced by the flurry of upsets in the first two rounds — the women fall on the other side of the spectrum. There have been upsets, don’t get me wrong, but they’ve been few and far between.

Twelfth-seeded BYU is the only double-digit seed to advance to the Sweet 16 in the women’s tournament. And the favorites to keep advancing are easy: Notre Dame and Connecticut. Both of these teams completed the regular season with an undefeated record and had their way with their first- and second-round opponents. As the top overall seeds in the tournament, this is somewhat expected … except that the Fighting Irish and Huskies are miles ahead of the rest of the field.

And this disparity isn’t a recent trend. Some teams have come and gone as top contenders in the nation — Texas A&M won the national championship in 2011, while Baylor and Brittney Griner won it in 2012 — but Notre Dame and UConn have always remained fixtures come the postseason.

In the past four seasons, the string of success by these two teams has been unprecedented. And this isn’t saying that they were good one year and bad the next, or even in a rebuilding stage — they don’t have to rebuild because they just reload. In the last four years, Notre Dame and Connecticut have a combined 275-25 record (that’s a .917 winning percentage), six Final Four appearances, and last year’s NCAA championship.

This success starts with the coaches. UConn’s Geno Auriemma has been at the helm for 29 years and hasn’t missed the NCAA Tournament since 1988. When he came in during the early ’80s, Connecticut was by no means a powerhouse, but the team was decent. Not only did he change the direction of the program, but he also gave the women a winning mentality. Auriemma will certainly be a Hall of Fame coach alongside Pat Summitt, the coach of Tennessee from 1974-2012, as they were both instrumental in bringing women’s college basketball to the national stage.

Fighting Irish head coach Ann “Muffett” McGraw took a different, more winding, road to success at Notre Dame. Despite her 25-year tenure, she won her first and only title in 2001. However, she has compiled a .743 winning percentage and taken Notre Dame to five Final Fours (1997, 2001, 2011, 2012, and 2013) during her time in South Bend. While McGraw isn’t as much of a household name as Summitt or Auriemma, she has become an image of success in college basketball and looks to remain so.

Though these two coaches are certainly terrific at what they do and shoulder much of their respective program’s success, at the end of the day, the players are the ones on the floor. Some of the WNBA’s best players have come from these schools — Diana Taurasi and Maya Moore from Connecticut, Skylar Diggins from Notre Dame — and they continue to recruit and attract the best of the best.

This season, Connecticut is led by the duo of forward Breanna Stewart and guard Bria Hartley, who average a combined 36.2 points per game. At 6-foot-4, Stewart is a force to be reckoned with in the paint, and Hartley does a little bit of everything inside and outside the perimeter. Notre Dame runs a bit of a smaller starting five, but their two starting guards, Jewell Loyd and Kayla McBride, make up for it with their combined 35.2 points per game.

The Huskies and Fighting Irish each need four more wins to complete an undefeated season and also win a national championship. However, both can’t achieve that feat. If they advance through the rest of the field, they’ll square off in the championship game. Connecticut will be looking for a repeat title and Notre Dame is seeking to end their 13-year title drought. While the women’s tournament doesn’t have the same hype as the men’s side, if Notre Dame and Connecticut make it to the final, that will certainly be a game for the ages.