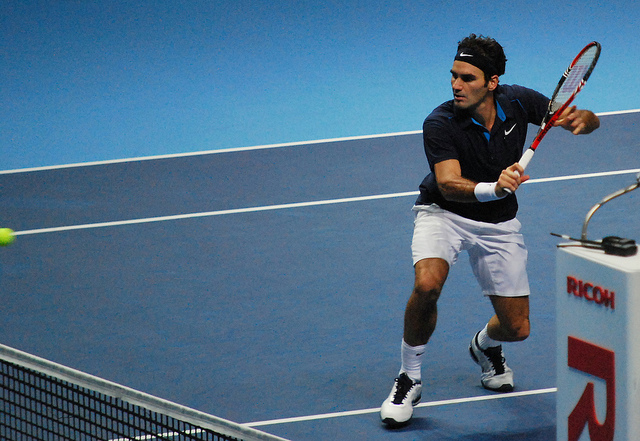 Roger Federer does not win as often as he used to. His appearance in the second week of a Grand Slam is no longer a given, and the kind of match he once won with ease can present a five-set struggle for the Swiss tennis player. He does not have a death-grip on the world’s number 1 ranking anymore, but certain records are likely to remain his.

Consider Federer’s 70th win at the Australian Open, a feat that came after beating Blaz Kavcic 6-2, 6-1, 7-6. The victory extended his win total Down Under well beyond Stefan Edberg’s 56 wins. Novak Djokovic has 43 wins in Australia, and 40 belong to Rafael Nadal. Federer then extended the streak in Australia to 73-10 while advancing to his 11th consecutive Melbourne semi-final after beating Andy Murray 6-3, 6-4, 6-7 (6), 6-3. That set up a showdown with top-ranked Nadal.

At 32 years old, Federer is the oldest of the three and although he has shown some signs of slowing down, he is still a force to reckon with. Nadal is 27, and Djokovic is 26. If they want to rack up more wins that Federer in Australia, or break other Swiss-made records, they will not only need to keep pace with however he preforms now, but also outpace him in years to come.

This is a challenge any professional men’s tennis player faces when attempting to knock Federer’s name off the top spot. Playing and winning consistently for several years will be crucial to accomplish this goal. It will be no easy feat because the men’s game currently has a greater depth than it did when Federer dominated.

In 2011, Djokovic had a stand-out year. He won 10 titles, was 21 and 4 against opponents ranked in the top ten, and took home three Grand Slams. It was the first time the number 1 player in the world at year ‘s end was not Federer, or Nadal since Andy Roddick ended the year on top in 2003.

In 2012, Djokovic saw much of the same success, but less dominance. He lost to Federer at Wimbledon, Nadal at the French Open, and Andy Murray at the US Open. Contrast that to 2004 when Roger Federer was 18 and 0 against top 10 players, won three Grand Slams, and took home 11 tour titles. By 2005, Federer was 6 and 0 in Grand Slam finals; in 2006, and 2007 he won three Grand Slams. Along the way, the only player who consistently gave Federer trouble was Nadal.

But as a result of all these years of success, Federer has a lot of miscellaneous records to his name. At Wimbledon, he holds the first and third place records for most consecutive sets won, 34 and 26. (John McEnroe is nestled in the middle with 31.) He has the most consecutive Grand Slam final appearances, 10, and takes runner up there too with 8. Nadal trails in third with 5.

Federer leads the way in Grand Slam match wins and in hard court, as well as grass court titles. He has spent the most weeks as the number 1 rank (302) and the most consecutive number of weeks on top (237). Nadal’s corresponding numbers are 119, and 56.

The early glory days of Federer were the infant years of Nadal and Djokovic’s careers. Federer was able to over-power his more seasoned opponents on the tour, like Roddick, and Lleyton Hewitt. As previously mentioned, Nadal was the only thorn in his side for a while. Now, more players have come into their own, and the entire game has been elevated. Federer benefited from a high level of fitness and health that Nadal and Djokovic have not known. He consistently played at the top of his game, and the records prove that. Absent a similar period in men’s tennis, with an authoritative player, some records will remain relics of Federer’s days on top.