Press surrounding the 2014 Winter Olympics in Sochi has been anything but positive, what with the anti-LGBTQ rights legislation in Russia, corruption surrounding the funding and game preparations, stray dog eradication, and terrorist threats. Political and social concerns have led to widespread criticism, but the rather bumpy start to the Olympics has also resulted in a stream of more light-hearted and hilarious complaints on conditions surrounding lodgings and city maintenance.

One of the biggest stars of Sochi comedy? #SochiProblems, a twitter account retweeting athletes and journalists comments on some of the more unfortunate circumstances they encounter live. Everything from poor hotel conditions: 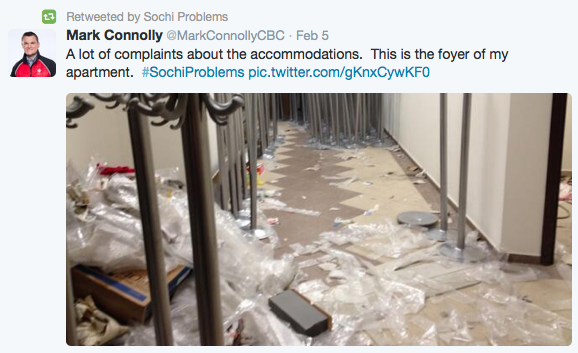 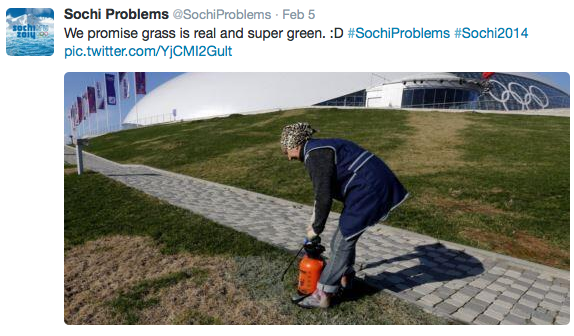 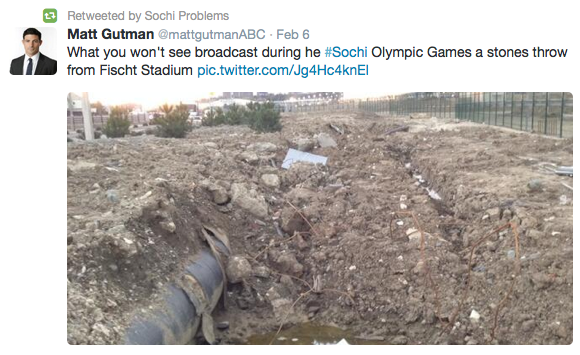 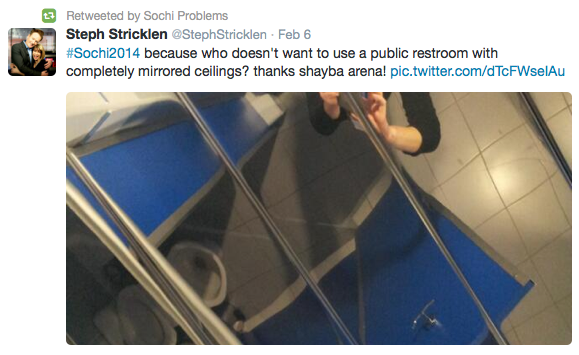 As well as many more amusing anecdotes. It also covers some of the bigger mishaps, such as the failed five ring opening — only four rings and an unopened fifth — though as Yahoo Sports points out, this is hardly the first time a country has stumbled over ceremonial logistics in the opening ceremonies. Just look at South Korea’s white doves that caught on fire in 1988.

These tweets prove that social media has a definite roll in keeping us abreast of things we might otherwise miss — especially considering Russia’s almost palpable desire to keep up international appearances. Amusingly, #SochiProblems has a whopping 270,000 followers — including USA Today, compared to the official #Sochi2014, with its 169,000 followers.

“In the past, traditional media would focus on the games. But with new media, all aspects of such global events are put under the spotlight. If hosting the Winter Olympics was a means to help improve Russia’s image or attract tourists, simple propaganda and advertisement isn’t proving to be enough” said Lo Shih-hung, an associate professor of communications at the National Chung Cheng University, to Bloomberg.

Others have fairly pointed out that, as with everything unauthenticated that goes up online, a number of these tweets are proving to be inaccurate or sometimes a bit misleading, according to the Washington Post in an article that #SochiProblems then retweeted. The Toronto Observer looked into the account holder of amusing Twitter handle, discovering it to be created by Alexander Broad, a twenty year old journalism major at Centennial College in Toronto, Canada. “It was a joke, it’s funny, something that I didn’t think was going to take off. I was, like, ‘You know what, if I get 15 followers that will be cool.’ Then I logged out, [and] continued with my day,” said Broad to the Toronto Observer.

“The whole thing of @SochiProblems came from my mind, where I thought ‘Oh look I spilled Timmies on my coat.’ That’s a Canadian problem,” he said, referring to a Canadian coffee chain named for and co-founded by Tim Horton, the hockey player. “I couldn’t believe how much it had escalated and it just blew my mind,” said the college student, who also noted that the twitter page is partially political as it covers more than just the humorous issues surrounding the games.