The Super Bowl has brought us some of the most clutch teams in sports history. Whenever their backs were against the wall, they always had the right players who could make the important plays needed for victory. But there have also been moments in the Super Bowl when teams who were in prime position to win came up short simply because they choked under pressure in the big game and let it all slip away. In these contests, one play can make all the difference in the world. And if you’re not careful, you’ll walk away with nothing. Here are five National Football League teams that choked in the Super Bowl. 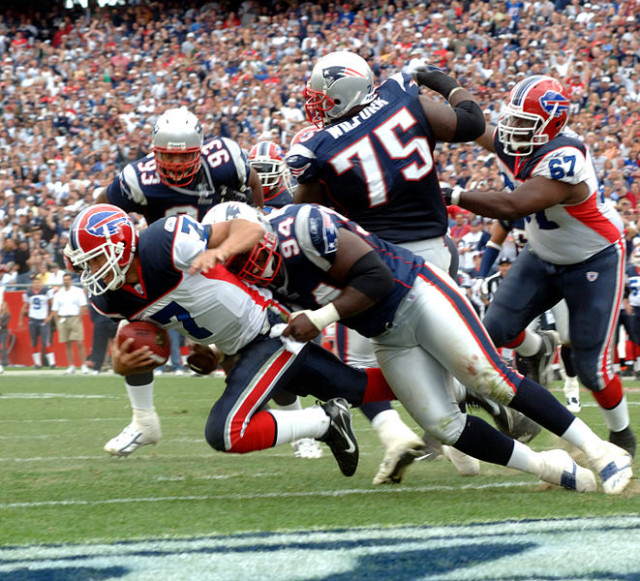 During the 1990 NFL season, the AFC Champion Buffalo Bills had it all: a great quarterback (Jim Kelly), a solid running back (Thurman Thomas), and a tough defense. Finishing the regular season with a 13-3 record, the Bills were hard to beat. And after carrying that positive momentum in Super Bowl XXV, they had the New York Giants against the ropes late in the fourth quarter. Trailing 20-19 on the final drive, Buffalo had the chance to put them away with a game-winning field goal. But kicker Scott Norwood missed a 47-yarder wide right. To make matters worse, the Bills lost three more Super Bowls in consecutive years, completing four losses in a row.

All the 2007 New England Patriots needed to do to complete a history-making 19-0 perfect season was beat the New York Giants in Super bowl XLII. But the G-Men hunkered down with a tough defensive game, which threw Pats QB Tom Brady off his rhythm. Giants field general Eli Manning had a miraculous last drive in the fourth quarter, throwing a touchdown to wide receiver Plaxico Burress in the corner of the end zone to win, 17-14.

The Patriots defense had multiple opportunities to sack Manning and intercept him, but couldn’t make a play. This game also featured a mind-blowing catch by Giants WR David Tyree, which is still considered by many to be the greatest play in Super Bowl history. After all the season drama, New England finished with an 18-1 record.

In the 1968-1969 season, the Baltimore Colts had a 15-1 record with a well-rounded offensive and defensive team. They were poised to beat the New York Jets in a convincing way when the two squads faced off in Super Bowl III. Most football analysts chose Baltimore to wipe the floor with their opponent in the big game, but in the week leading up to the matchup, Jets quarterback “Broadway” Joe Namath gave a gutsy “guarantee” that they would win. Lo and behold, that prediction came true, with New York pulling out a 16-7 victory.

Quarterback Donovan McNabb led his Philadelphia Eagles to Super Bowl XXXIX against the New England Patriots after a dramatic NFC Championship victory. But after a week of trash talking by Philly, they definitely couldn’t walk the walk against the Pats on game day and lost, 24-21. Even though wide receiver Terrell Owens pulled in nine receptions for 122 yards on a hobbled ankle, McNabb could not get the Eagles’ two-minute offense going at the end of the game. The QB finished with 357 yards and three touchdowns, but he threw three interceptions and was sacked four times.