There’s a lot of money in the world of sports. The athletes are rich, so are the owners, and the teams are worth fortunes.
Despite all that, when teams need new stadiums, the owners cry poor. They make the public pay, or they threaten to move. That’s why there are so many taxpayer-funded stadiums in the United States.
Professional sports teams are raking in the money, but taxpayer money in these 15 cities paid for new billion-dollar stadiums. Georgia State University tracks the trends and crunches the numbers to find out which cities have taxpayers spending the most on sports stadiums.

The Braves moved into a stadium after the 1996 Atlanta Olympics. They moved out to Cobb County, which is about 13 miles from the city, after the 2016 season. Taxpayers in Cobb County ponied up for a brand new stadium, and their $300 million bill is a conservative estimate. Some experts believe taxpayers might have to shell out $400 million for the stadium.
Next: A big city with an expensive stadium.

When the Barclays Center opened in 2012, it lured the Nets from New Jersey and the Islanders from suburban Long Island. Less than six years later, the Islanders are hunting for a new home and the taxpayers are still on the hook for more than $300 million.
Next: Bad financial forecasting has taxpayers on the hook for a hockey haven.

A bit of bad financial forecasting fostered a dismal deal for Pittsburgh taxpayers. The Pittsburgh Post-Gazette reports the interest rate on variable rate bonds spiked, and so the taxpayer burden also spiked to more than $300 million for a hockey arena.
Next: More than 40% of this city’s debt pays for sports venues.

Sure, the burden on Glendale’s taxpayers for their football stadium doesn’t look too bad. After all, it’s outside the top 10 on our list. However, Americans for Tax Reform reports more than 40% of Glendale’s debt is from its sports complexes, of which University of Phoenix is the largest and most expensive.
Next: An expensive renovation

New Orleans and the Saints deserve at least a little bit of credit. Instead of waiting for the Superdome to grow antiquated, they both jumped ahead of the curve and proposed major renovations instead. Yet the taxpayers are still on the hook for $321 million, according to the Georgia State University data.
Next: It could be worse for this city, and it still might be.

With the Atlanta Braves moving out to the suburbs, the city didn’t have to pay for upgrades or a new baseball stadium. Score one for the city. However, the taxpayers are paying for upgrades to Philips Arena and a brand new football stadium for the Falcons. A conservative estimate has the public is paying $200 million for Mercedes-Benz Stadium, but CityLab reports the cost might be more like $600 million. The higher total would move Atlanta firmly into the top 5.
Next: Almost $400 million in public money for an upgrade. 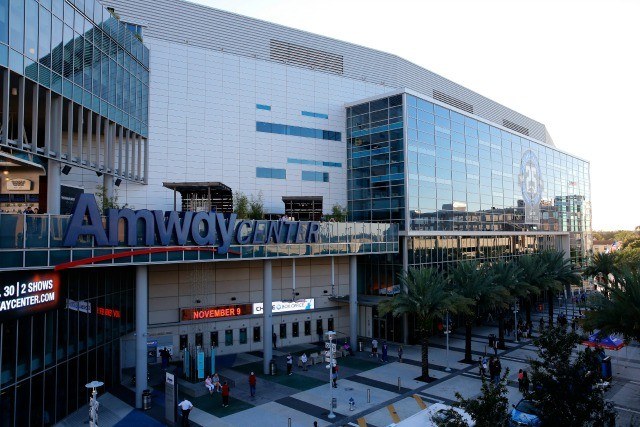 When the Magic started hemorrhaging money, they demanded a new stadium and threatened to move if they didn’t get it. Team officials claimed they needed a new home in order to survive. Orlando initially balked, but it eventually caved and foisted 90% of the bill on the taxpayers.
Next: A city billing the taxpayers for a twofer.

Give Kansas City some credit for being up front. Looking to update its two pro sports stadiums, the city let the taxpayers vote on the idea. The taxpayers said yes, so even though they’re on the hook for $475 million, at least they were the ones who decided to spend the money.
Next: Taking the good with the bad.

The Marlins played in a football stadium north of the city before moving to their new downtown stadium in 2012. On the one hand, being closer to the city is better for the fans. On the other hand, the taxpayers are on the hook for one of the worst and most expensive stadiums in the U.S.
Next: Things could have been worse.

This may be one of the best places to watch an NFL game, but that’s probably not much consolation for the folks in Indy. The taxpayers got saddled with 86% of the bill for one of the most expensive stadiums in the United States. However, it could have been worse. Lucas Oil Stadium, with a total cost of $720 million, opened before billion-dollar football stadiums were commonplace.
Next: This is no mirage

The stadium that will house the NFL’s Raiders started as just a hole in the ground, but the public debt is no mirage. The stadium could cost nearly $2 billion, and even though the taxpayers are on the hook for less than half the cost it still adds up to $750 million.
Next: Did you ever think you’d see a soccer stadium make this list?

Audi Field is the home for soccer team D.C. United. Their $300 million stadium is the most expensive soccer-specific stadium in the United States, and the taxpayers are on the hook for half of the cost. But it’s Nationals Park that really inflates the bill. The stadium cost $693 million to build, and the public is shouldering the entire burden.
Next: One city. Two stadiums. Millions in public money.

When Minneapolis closed the Metrodome it forced the Twins and Vikings to find new homes. Guess who paid for the new stadiums? If you guessed the taxpayers, give yourself a star.
Without getting to vote on the issue, the public ponied up $356 million for Target Field and $498 million for U.S. Bank Stadium. Those are two bad deals, but still $90 million away from the top spot.
Next: A relatively small city with a big tax bill.

With a close to 400,000 people, Arlington isn’t a small city. Compared to neighbors Dallas and Fort Worth, however, it’s on the small side. Despite its size, Arlington is on the hook for two very expensive stadiums.
The taxpayers voted yes to pay for half of the Texas Rangers’ new $1 billion dollar stadium, which should open in 2021. Apparently, the Arlington public loves paying for stadiums. They also paid $444 million for the Dallas Cowboys’ AT&T Stadium, so not only is it one of the most expensive NFL tickets, it’s one of the most expensive stadiums for the taxpayers.
Next: Now comes the scary part.

The numbers are staggering and sad

Add up all those millions of dollars we just finished discussing, and you end up with more than $7.5 billion. And that’s just when you count the 15 cities where taxpayers have the biggest burdens. Almost every city with a professional sports teams has taxpayers shelling out to build or renovate stadiums.
Detroit’s public is paying $285 million for its new hockey and basketball arena. Sacramento is paying $255 million for a new home for the NBA’s Kings. Milwaukee taxpayers are shelling out $250 million for a new arena for the NBA’s Bucks.
Check out The Cheat Sheet on Facebook!