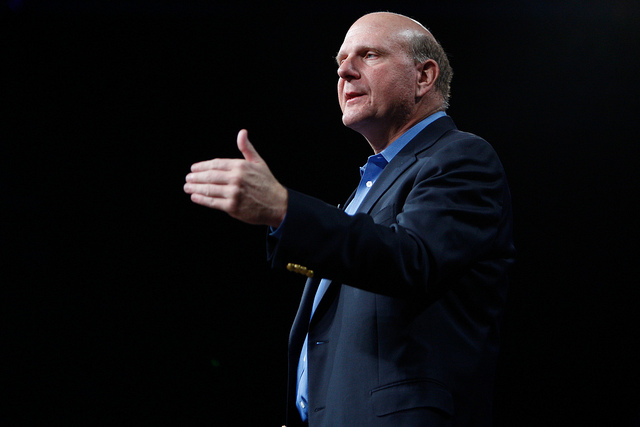 Well, that was fast. After former Microsoft CEO Steve Ballmer was reported to be in the mix for the Los Angeles Clippers yesterday, it appears that he’s going to walk away the newest NBA owner, paying a reported $2 billion for the franchise. While the sale has not been approved by the NBA, all signs indicate that will be the least troublesome bit of this entire process, which saw the NBA reach a head on what can be charitably called ‘The Donald Sterling Problem,’ a thirty-year pattern of racism, discrimination, and embarrassment both inside the NBA and out that reached a new level of publicity with the release of recordings in which Sterling espoused a variation on the Plantation Politics and asked his mistress/personal assistant/hanger-on not to bring black people to Clippers games.

While there are some people that still harbor delusions about whether or not the NBA was allowed to kick Sterling to the curb like this (long story short: It was, and it didn’t violate the Constitution by doing so), the sale marks the end of an era in the NBA — one that proves that, just like anywhere else, freedom of speech is not freedom from consequence. And, honestly, the most hilarious thing about the whole debacle came from Shelly Sterling’s press release, which touted that “we have worked for 33 years to build the Clippers into a premiere NBA franchise. I am confident Steve will take the team to new levels of success.”

The fact is that the Clippers found success in spite of the Sterling ownership, not because of it. With Ballmer, the Clippers players, employees,and owners can finally look forward to, you know, enjoying who they work for. Based on the reaction from around the sports universe, that’s an opinion that’s shared by many spectators as well. Here are the seven best responses to the Ballmer sale.

The Goofy
That’s right — Steve Ballmer was the guy who invented Clippy. If you’re old enough to remember Clippy, you’re undoubtedly experiencing some long-dormant emotions surging to the front, as the widely hated Microsoft Office Assistant just made the first appearance in your psyche for the first time in forever. Probably. Unless you find yourself thinking of Clippy a lot. We’ve got to wonder if Ballmer was in the middle of signing the paper work when that hellish demon of workflow inefficiency popped up to ask him if he was writing a letter. Clippy may have also suggested that Ballmer rephrase that.

The Team
Speaking to the Los Angeles Times, a handful of Clippers players chimed in to let their feelings be known. Each of them, needless to say, saw the change as a step in the right direction. DeAndre Jordan, the starting center for the team, apparently responded to the news in a text by saying “Ballmer, huh? Nice.” While veteran Jared Dudley, who played a majority of his career for the Phoenix Suns, said that the sale was “what everybody in the NBA wanted to happen, [t]hey wanted to get Sterling out and move forward and in the right direction.”

Star Power Forward Blake Griffin said he was pleased, and as he referred to the sale as “the final piece of the puzzle” and reiterated that the closure (or at least, the relative closure, since Sterling might tie it up in court) “kind of allows everybody to go back to focusing on the real goal, and that’s putting 100% of everything into winning a championship.”

We going Commie in USA? If #Steriling is nuts you don’t take his property espec. without evidence. Screw #NBA. Who tested? When? Good AM!! — Ralph Cindrich (@RalphCindrich) May 30, 2014

Ralph Cindrich is currently a sports agent, representing NFL players. He’s also a former NFL Player, rostered  for three teams during a short stint in the ’70s. He is, by all accounts, a fairly fantastic agent — he famously worked a clause into Will Wolford’s contract that guaranteed that Wolford would be the highest paid player on the his team — but apparently he doesn’t understand the difference between private property in the general sense and how private property works in regards to franchises. The NBA can vote Sterling out of the league, and/or dissolve the Clippers franchise, at any time. That’s how this gig works.

One of the obligations to the league that comes with being part of a franchise — that each owner is bound to work towards the betterment of the organization. Sterling pretty obviously violated that, even if the recording was leaked (We doubt it was covertly taped, since it’s fairly clear that Sterling knew he was being recorded as you listen to them). Also, technically, if we really were ‘going Commie in the USA’, there wouldn’t have been a sale, it would’ve just been a reallocation. But that’s a detail. Kind of like how ‘Steriling’ isn’t how you spell Sterling.

But Cindrich’s point is at least harbored in some kind of reality — Sterling has made claims that he’s going to fight the sale, and while Ballmer is definitely going to take over the team, it could be a while before we’ve seen the last of DTS — something that can’t be said for Scott Rochelle, another sports agent, who tweeted this: “Donald Sterling still owes the NBA $2.5 Million, clearly he has the means to pay, but does he feel compelled to do so? #NotOverYet.” This probably needs to be debunked right now — Sterling doesn’t have to pay the fine at all, since the NBA can just withhold it from him. He’ll be out his money one way or the other.

Things are moving quickly with the Clippers’ situation, including mysterious mental diagnoses by supposed “experts.” http://t.co/6cEqjMXNUC — Herman Cain (@THEHermanCain) May 30, 2014

This one’s just notable because of the quotes around “experts.” Herman Cain, who made a brief foray into the public eye with a semi-serious 2012 presidential bid, hit the nail on the head for some NBA observers who spend too much time looking for Big Brother wherever they can. Wondering about whether or not Sterling, who was deemed mentally unfit to make decisions relating to the Sterling Family Trust (the organization that officially owns the team, split evenly between Donald and Shelly Sterling), is some sort of ‘fall guy’ is like wondering about whether or not Professor Moriarty really taught lessons. That is to say, it’s beside the point.

There’s also the possibility that it was Shelly Sterling’s hand behind the ‘experts’ rather than some nefarious government-y meddling. In case you haven’t heard the tapes, somehow, the first one is below.