The Associated Press just released its 2014 rankings of the top college football programs in the country, and for the first time in a long while, the poll won’t have any impact on which teams are eligible for bowl game consideration. (Previously, while the AP poll was never factored into which teams made it into the bowl games, the list’s influence undoubtedly played a role.)

This is probably a good thing, but it does make evaluating the impact of the venerable poll — started in 1950, the AP poll is now a weekly list, with votes contributed by 60 sportswriters and other football-focused thinkers — a little more nebulous. While it won’t be indirectly tied to the BCS anymore, since the BCS is dead and replaced by the College Football Playoff, it would be foolish to consider this list inconsequential, since it remains one of the biggest talking points in the NCAA’s version of football, actual impact or not.

Here, then, are the seven most elite teams in CFB, as determined by those in the know. A note on the scoring: Each team is given a point allocation for each place they receive — 25 points for a first-place vote, 24 points for second, and so on, as each ballot is allocated 25 slots with a decreasing amount of points.

Coming off a 10-3 season and a victory over the Virginia Tech Hokies in the Sun Bowl (the Bruins won, 42-13), UCLA has jumped up 14 spots since last year’s AP preseason poll, when they were ranked 21st in the country, and are starting one of the top Heisman candidates in Bretty Hundley at quarterback. The Bruins’ opening poll position is two ranks higher than their top mark in 2013.

The losers of the final BCS bowl game, the first SEC squadron in the top seven still manages to grade out better than many of its contemporaries — eight teams from the Southeastern Conference were featured in the AP’s top 25, and Auburn is rated the second best of that contingent. In the Tigers’ second season under head coach Gus Malzahn, they made it all the way to No. 2 in the AP rankings last season. They’ve slipped a bit since their tightly contested 34-31 loss to Florida State.

Celebrating 62 years in the Big Ten (although the Big Ten has changed considerably over the years), the Buckeyes wound up falling to Clemson in the Discover Orange Bowl last season, but fans can take solace in the fact that people in the know expect the Buckeyes to be significantly better than the Tigers this year — Clemson only came in at the 16th spot in the AP poll.

The other half of the effort to dethrone the SEC, Oklahoma orchestrated a victory over Alabama, which must have kept Nick Saban up for at least a week — maybe two. The Sooners are entering their 16th season under head coach Bob Stoops and have never recorded a losing season since he took the position. In fact, Oklahoma has only won fewer than 10 games three times since Stoops was installed in charge. Things look good in Oklahoma. 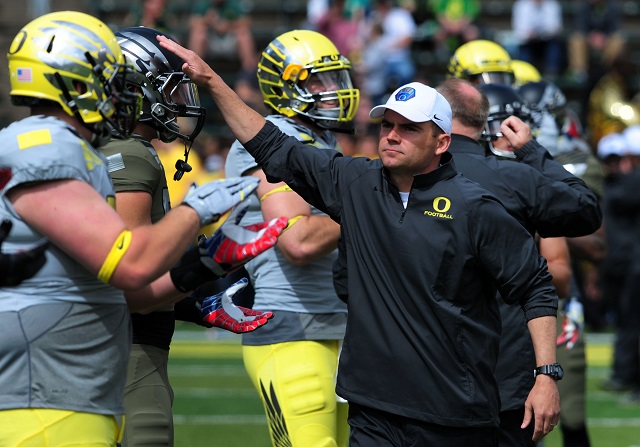 The highest ranked Pac-12 team in a year that sees the conference put a record six teams into the top 25 (in addition to Oregon and UCLA, the Pac-12 is represented by Stanford at 11th, USC at 15th, Arizona State at 19th, and Washington at 25th), the Ducks’ high-scoring offense has become something of a CFB unicorn, especially after former coach Chip Kelly found success with the same strategies at the professional level. Oregon is now coached by Mark Helfrich, seen above imparting his wisdom through osmosis.

They lost the Sugar Bowl to Oklahoma and AJ McCarron to the NFL, but nothing can dampen expectations for SEC juggernaut Alabama. Do you remember the last time the Tide had a losing season? OK, so, it was back in 2006, but you probably had to Google it, and it hasn’t happened since Nick Saban (pictured above) took the reins. Saban, by all accounts, is a football obsessive who may or may not be able to process human emotions beyond the joy of victory and the pain of defeat.

The prohibitive favorites until they lose a game, Florida State boasts a defending Heisman winner, a decisive win over one of the SEC’s best teams, and an undefeated 2013 season. That is, suffice it to say, enough of a sterling curriculum vitae to keep the Seminoles with top honors until the season officially starts at the end of the month.