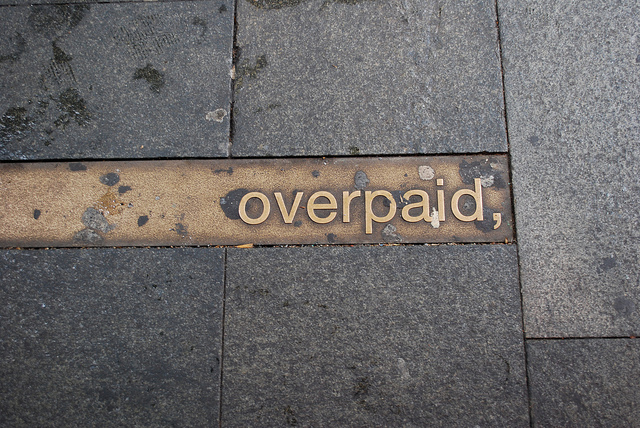 Contracts in the NBA are a tricky thing. Fans are quick to decry a player as ‘overpriced’ or not worth it, placing an asterisk next to a roster spot with the parenthetical (expiring contract) and hoping against hope that he gets traded or amnestied to free up cap space. It’s a rough way to judge a person’s ability on the court.

With the increased wave of statistically savvy NBA front offices, as well as a collective bargaining agreement that protects general managers from themselves — contract lengths have been reduced, a player’s choice in free agency has been curtailed, and a harsher luxury tax has stopped most teams from splurging into contention. That doesn’t mean that bad contracts have been kiboshed, though, and Forbes, using Wages of Wins’ Wins Produced formula, just came up with its calculation of the most overpaid players for this season, comparing a player’s salary against his WP (wins produced.)

We’ll take a look at the selections, give you the updated data, and pepper it with some additional analysis, exploring the mindsets of the front offices that were responsible for those contracts, explaining the expectations for the players compared to the reality, and identifying ways that the players could work their way off this list. All salary information courtesy of Forbes via basketball-reference.com. Updated Wins Produced information courtesy of Wages of Wins. Players have been ranked according to their 2013-2014 Wins Produced. 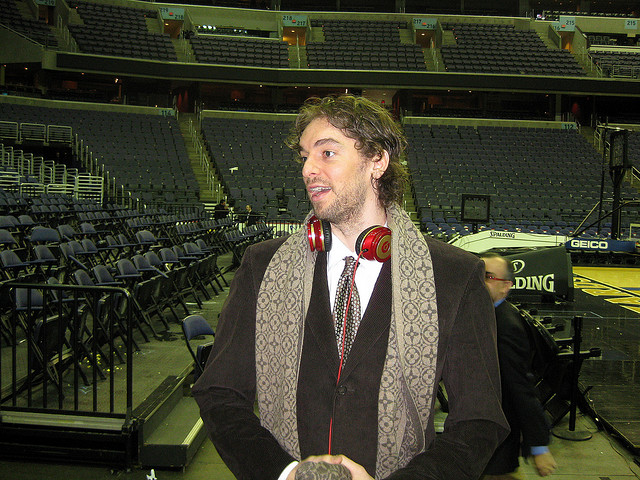 The Los Angeles Lakers have fallen on hard times. Pau Gasol provides a good metaphor for that. Arguably the best player on two championship teams — he had a better WS/48 than Kobe from 2008 to 2013 — Gasol spent this season as the most famous salary in the league, a $19.2 million expiring contract that could net the Lakers bits of the foundation for a long-delayed rebuild. We heard trade rumors about Gasol ranging from sending him to the Bobcats to watching him land on the Suns to the old standby: seeing him swapped for Boston’s Rajon Rondo.

The trade deadline passed with Gasol remaining in purple and gold, again, and the PF/C will become an unrestricted free agent as of July 1. With the Lakers poised to miss the playoffs for the first time since the Spaniard arrived in a widely mocked trade from Memphis, and Pau’s NBA contracts having already exceeded $150 million, look for Gasol to take a pay cut and bring his paltry 1.7 WP to a team that will utilize his talents better. 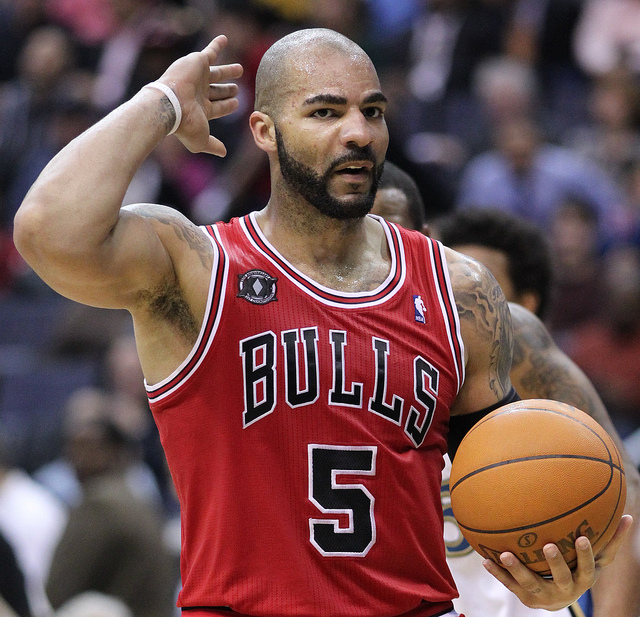 Carlos Boozer is a great second-piece. The guy behind the guy. The Vice President to the President. After leaving Cleveland during his third season under a flurry of controversy, Booz found himself as the spiritual successor to Karl Malone in Utah, teaming up with point guard Deron Williams to form a Stockton/Malone high pick and roll tribute group that, under the stewardship of longtime Jazz coach Jerry Sloan, used its flow offense to commit a series of ~50 win seasons to tape.

After heading to Chicago in the summer of 2010 in free agency (although it would actually be a sign-and-trade for Boozer and a pick  for a 13 million dollar trade exception), Boozer played second fiddle to Derrick Rose during Rose’s MVP season, and the Bulls would go a league best 62-20 behind a feisty defense concocted by head coach Tom Thibodeau, Rose’s scoring acumen, and Joakim Noah and Luol Deng’s glue-guy abilities. As the second option, Boozer was great.

Without Rose, and as the only real offensive weapon on the whole roster, Boozer has struggled mightily. A perennial amnesty candidate who might be the latest to fall victim to the fact that Chicago refuses to pay the luxury tax, Carlos may find himself looking for an MLE-level contract from a different contender over the summer. 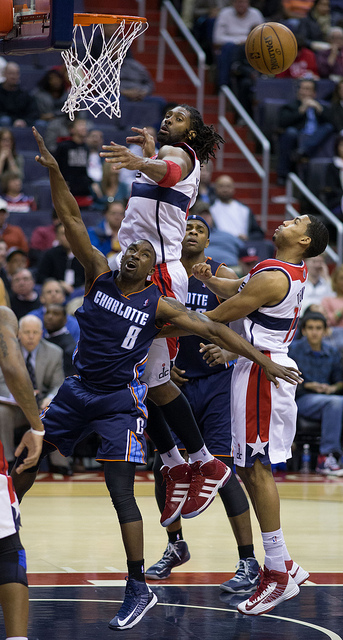 Ben Gordon was drafted by the Chicago Bulls with the third overall pick back in 2004. His rookie season he won the Sixth Man of the Year Award (Rookie of the Year would go to center Emeka Okafor, who averaged 15/10 for the Charlotte Bobcats), and it’s all been downhill from there. After hanging around with the Bulls long enough to pull down a sizable $10 million+/year contract from the Detroit Pistons, Gordon proved to be ineffective enough against his new contract that he was traded, along with a first round pick, for perennial “cut-that-check” all-star Corey Maggette. This season he spent about 15  minutes per game for a 27-32 win Bobcats team that’s slated for a possible playoff appearance against the Miami Heat or the Indiana Pacers.

Gordon won’t be with them, though. After being heavily shopped at the trade deadline by Charlotte, along with Ramon Sessions and Jeff Adrien’s expiring contracts, the Bobcats failed to move him. They were able to send Sessions and Adrian to the Bucks, though, to bring back guards Luke Ridnour and Gary Neal. With no need for Gordon after acquiring the two new backcourt players, the Bobcats released Gordon on March 1.

Freshly waived Ben Gordon will attempt to latch on with NBA team for remainder of season rather than sitting out, a source informed @CSNNW. 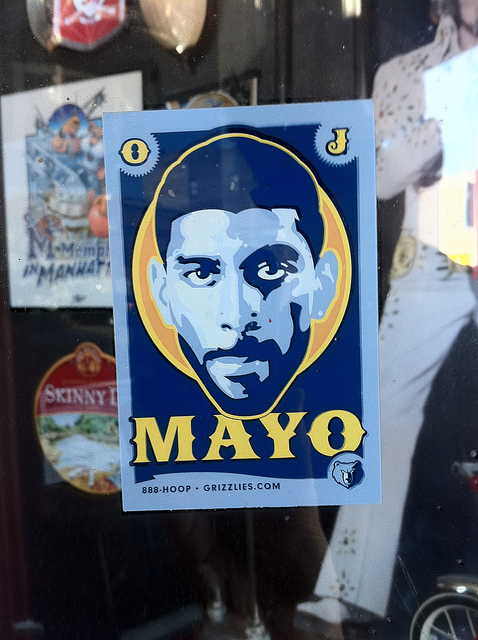 OJ Mayo, product of USC, was once an exciting shooting guard who looked like a solid, if raw pick when he was drafted by the Minnesota Timberwolves with the third pick of the 2008 draft. Mayo was picked behind Derrick Rose and Michael Beasley, but ahead of Russell Westbrook, Kevin Love, and Brook Lopez. Soon after the draft was completed, Memphis and Minnesota completed a trade, swapping Love and Mayo. Whoops.

Mayo’s rookie year looked promising, as he averaged 17/3.3/3 on 43 percent shooting. But he never got better. When Memphis let him walk in 2012 he signed with the Dallas Mavericks for one year. After the Mavericks let him walk, Mayo ended up signing a three-year deal with a Milwaukee franchise that is always desperate for OK players. He brings his negative wins produced to the floor every night with plays like this one. 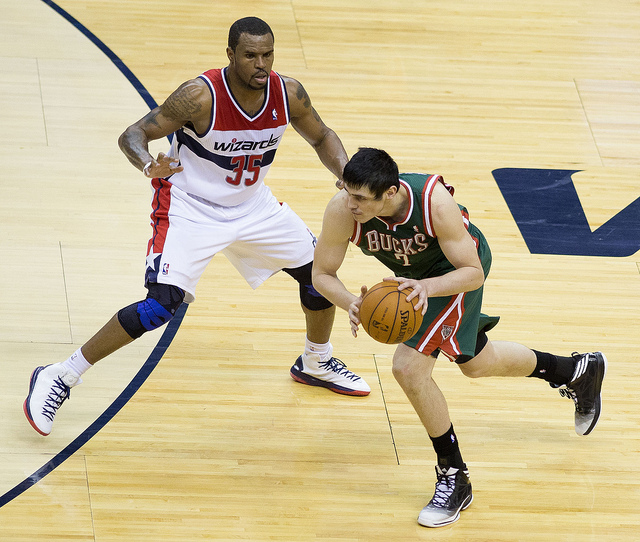 Ersan Ilyasova is the longest running Milwaukee Buck on the current roster. Over almost six seasons, Ilyasova has shot threes, steadfastly refused to play defense, and hung out on the bench while the Bucks have spun their legs on the treadmill of mediocrity. Ersan’s poor play hasn’t seemed to translate to any chance he’ll wind up on a different team. Per Basketball Insiders, the Bucks didn’t shop Ilyasova hard at the deadline because he’s one of the owner’s favorite players.

What’s been missing this year is his accuracy from beyond the arc. Ilyasova, a career 37 percent shooter from the land where three bombs are made, has been struggling with his shot this season, barely connecting on 30 percent of his attempts this year. Outside of his shooting touch, Ersan’s got little to offer any other team, aside from a touch of Turkish flavor. 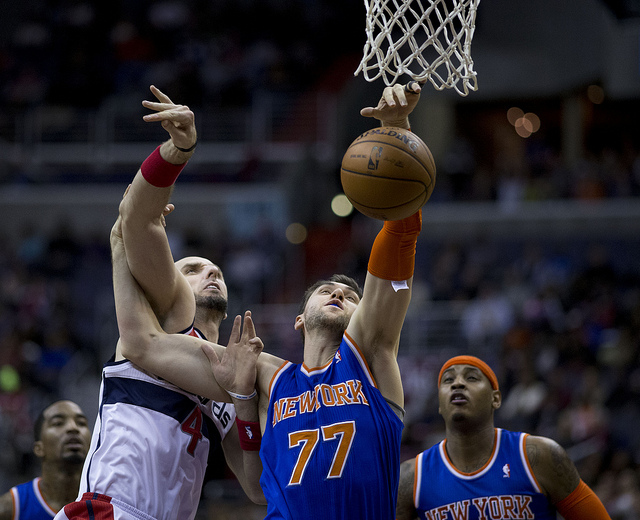 Poor Bargs. The #1 overall pick in the 2006 NBA Draft, Andrea Bargnani has joined the infamous Darko Mili?i? in the hallowed genus of Draftus Bustodium. A gifted outside shooter, the 7 foot Bargnani never put it all together, averaging a career 15/5/1 on 43 percent shooting (plus 36 percent from deep and 87 percent from the foul line) that isn’t horrible, but is far from ideal for the head of a draft class.

In comparison to Bargs’ ’13-’14 season WP of -1.4 , fellow No. 1 pick big men Dwight Howard and Anthony Davis are working with an 8.2 and a 9.0, respectively. That’s more in line with what’s expected from a player with that kind of pedigree. But it’s easy to see why Raptors GM Brian Colangelo saw in Andrea almost ten years ago.

One of the more fashionable positions in the modern day NBA is the stretch-four. The power forward with 3-point range that can force his man, usually the other team’s power-forward, out of the lane on the defensive end. That allows for better floor spacing for the offense, as well as an additional threat from deep. The Dallas Maverick’s Dirk Nowitzki is perhaps the best version of this in the league today. Bargs had all the tools to be the next Dirk, and back in 2006, international scouting wasn’t what it would become. Bargs went ahead of future All-Stars LaMarcus Aldridge, Brandon Roy, Rudy Gay, and Rajon Rondo. Toronto fans make videos set to Kelly Clarkson about his 2013 journey to the New York Knicks. They are unkind and hilarious. 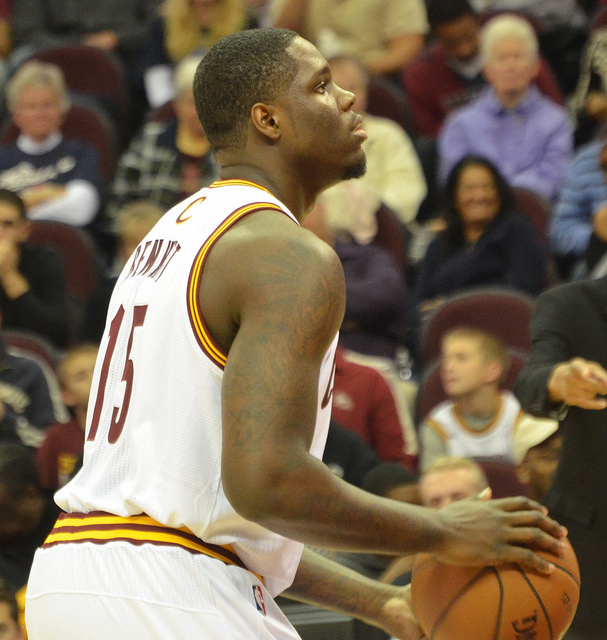 The Cleveland Cavaliers inspired a whole lot of confusion at the outset of the 2013 NBA Draft when they took UNLV forward Anthony Bennett with the first overall pick over favorites Nerlens Noel, Victor Oladipo, or Otto Porter Jr. Bennett, the third No. 1 pick for the Cleveland Cavaliers in the last ten years, did not impress quite as quickly as his pedigree-mates LeBron James or Kyrie Irving. Showing up to training camp overweight, Bennett proceeded to miss his first 16 NBA field goals and has labored in the bottom 10 of the league in PER rating. His -1.7 Wins Produced stands as the third worst in the league, and Bennett is making more money than the top two (Darrell Arthur, -1.8WP, and Tony Wroten, -2.4WP) combined.

Cleveland, their fans, and their ownership have been preaching patience when it comes to Bennett. It’s not his fault he’s being overpaid by virtue of his draft stock, after all. But when you’re a franchise as down-on-its-luck as the Cavs, the lack of early returns have to be discouraging. Cleveland’s two other No. 1 picks, LeBron James and Kyrie Irving, are currently holding down a 14.4 and a 4.1 WP, respectively.