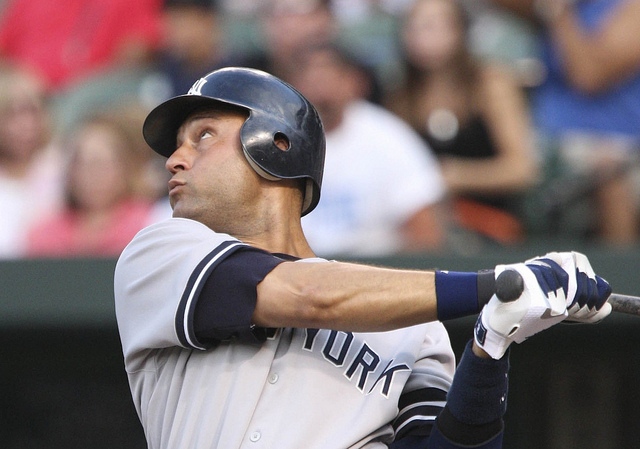 Yeah, Jeets! On Sunday, April 6, Jeter hit a pair of pitches. This, on the surface of things, does not seem especially abnormal — it’s the course of events in a baseball game, after all. Especially when it’s Derek Jeter. But those two hits catapulted the Hall of Fame shortstop into eighth place on the All Time hits list for Major League baseball.*

There’s an asterisk there because if you’re counting all of Cap Anson’s hits, then Jeter is actually ninth of all time. However, conventional wisdom states that Anson only hit about 3,000 ‘proper pitches,’ with the rest coming from the unrecognized by the MLB National Association of Professional Base Ball Players, a pro league from the late 19th century. So, Jeter has officially displaced Paul Moliter in the Top 8 with 3,220 career hits to his name.

Jeter, who is set to turn 40 in June, will be playing out his last season as a professional baseball player this year. After announcing the move to his Facebook fans and holding a “don’t call it a retirement” retirement press conference, Jeter is hoping to snag at least a few more hits before he rides off into the smog-choked New York sunset on the back of a gold-plated stallion. Here’s who ranks as his contemporaries and peers on the All Time Hits List.

Pronounced Yuh-Strem-Skee, Yaz played for more than 20 years with the Boston Red Sox, from ’61-’83. That’s a lot of time to do a lot of hitting. He did it so well that he ended up in the Hall of Fame, as well as finding his likeness ensconced in a statue outside of Fenway Park. He’s also slated for induction into the New York State Public High School Athletic Association’s Hall of Fame.

When he reached the Baseball Hall in 1989, “he was the all time Red Sox leader in eight major categories — games, at-bats, runs, hits, doubles, total bases, RBIs, and extra-base hits,” according to his profile on the Hall’s website. Like Jeter, Yaz retired having played his entire career for one franchise, and was grateful to the Sox ownership and his fellow players, as well as acutely aware of his position in baseball history — at least, judging by his introductory speech, where he quoted Grantland Rice and tipped his hat to the sportswriters who voted him in. Here he is at his best, hitting a baseball for his 400th home run all the way back in 1979. 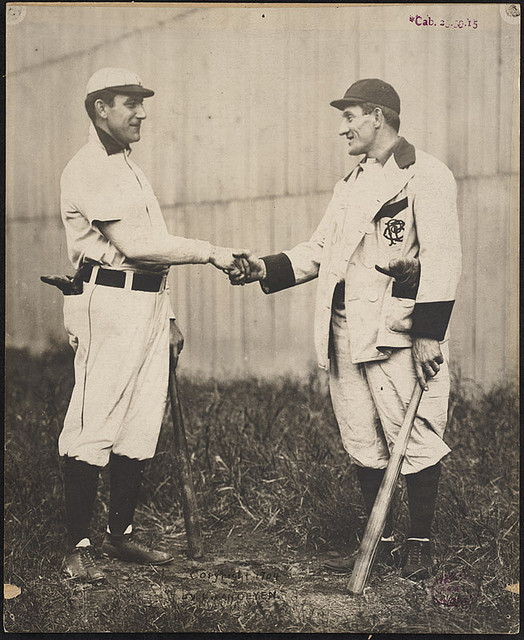 Not only was Honus Wagner — who played from 1897-1917 — one of the first five inductees into the Baseball Hall of Fame, but he was second in overall votes, tying Babe Ruth and coming in behind Ty Cobb. Not terrible company. His nickname, The Flying Dutchman, was also pretty fantastic. There’s also the whole angle where he’s widely regarded to be one of, if not the best players of all time. Wagner, who passed away in 1955, has that going for his legacy, too.

The shortstop (and first baseman as well as rightfielder) spent his nearly entire MLB career with the Pittsburgh Pirates, joining up with the club after the National League contracted down from 12 teams to 8, disbanding the Louisville Colonels club that he had been playing for in 1900. Yes, it was a long time ago. In 1905, Wagner would become the first athlete to give an endorsement to a product when he put his name and signature behind and on, respectively, the Lousville Slugger. He’s also the face of the rarest baseball card on earth. Seriously. They made a documentary about it and everything. 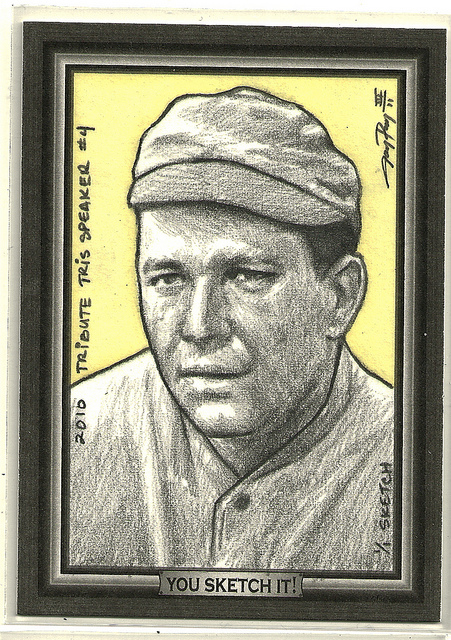 His nickname was ‘The Gray Eagle.’ He played from 1907 until 1928, with stops in Boston, Cleveland, Washington (for the Senators), and Philadelphia (a season spent with the A’s.) Along the way, Tris Speaker managed to hit his way into the Hall of Fame — sense a trend yet? — as well as the record books. Speaker owns the record for most doubles hit in a single career, with 793, a mark that makes up more than 20 percent of his 5th place spot on this list. He was a member of the Red Sox championship team in 1915, and upon settling in Cleveland, became one of the more visible examples of a player-manager that the league has ever seen.

Inducted into the Hall of Fame in 1937, the formal ceremony was held in 1939. Here is his speech in it’s entirely, courtesy of the Hall website.

“Thank you Tilly, and I guess it’s good afternoon ladies and gentlemen. I’m not going to take up a great deal of time, Connie Mack really made a speech for all of us. I’m very happy indeed to have been chosen by the sportswriters as a member of this great Hall of Fame. Our time is very limited so I’m going to thank you again and let someone else come on. Thank you.” 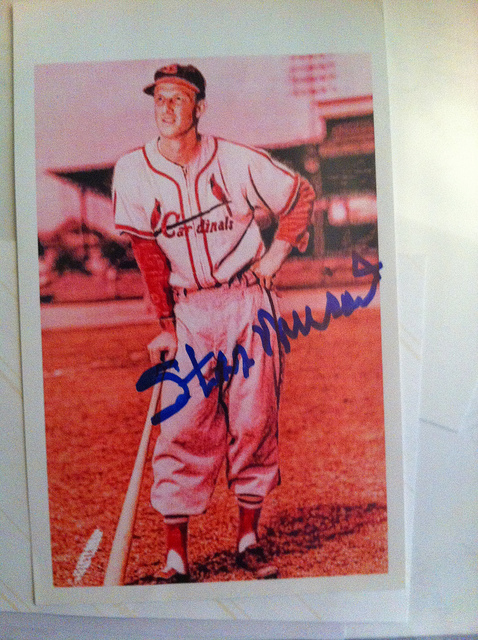 He’s so famous and such a badass that searching ‘Stan The Man’ on Wikipedia redirects to his profile — Stan Musial, who played all 22 years of his MLB career with the St. Louis Cardinals (it would’ve been 23, but he took a year off to join the Navel and fight in World War II because, again, badass) was a three-time MVP Award winner, 24-time All-Star and a three-time World Series Champion. He is first in all time career hits for a single team.

Musial, who died in 2013 at the age of 92, received the Medal of Freedom in 2011. He hit 375 home runs and was responsible for nearly 2,000 RBIs. In the midst of his 1969 Hall of Fame speech, Musial hit one more out of the park, looking back on his career, which spanned the early ’40s until the early ’60s. “I think I can feel qualified to say that baseball really was a great game, and baseball is really a great game, and baseball will always be a great game.” Indeed. Here’s footage of Musial’s final at bat, in 1963. 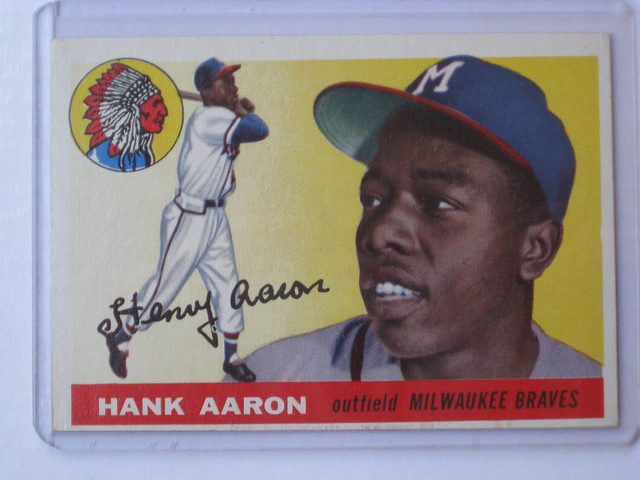 On the 40th anniversary of his 715th home run — the one that pushed him past Babe Ruth for first place for the most homers ever — it’s a good day to celebrate Hank Aaron. Aaron, who swung for almost 3,000 hits that didn’t end up as home runs, famously faced death threats as he closed in on the record. The Hammer was one of the last MLB players to have played in the segregated Negro Leagues and the minors before making the jump to the majors in 1954.

Over the course of his playing career, Hank Aaron would participate in 25 All-Star games and with the MVP award once. He would go on to have an award named in his honor — the Hank Aaron Award, put forward in 1999, recognizes a notable offensive player in both the National and the American leagues each year.

In light of the 40th anniversary of what many feel is still the ‘real’ home run record — Barry Bonds broke the record in 2007 but his flirtation with performance enhancing drugs has lead many fans to disavow his accomplishment — here is Vin Scully’s radio call of Aaron’s historic home run. In the words of the legendary sportscaster, “What a marvelous moment for baseball, what a marvelous moment for Atlanta and the State of Georgia, what a great moment for the country and the world. A black man is getting a standing ovation in the Deep South for breaking the record of an all time baseball idol. It is a great moment for all of us.” 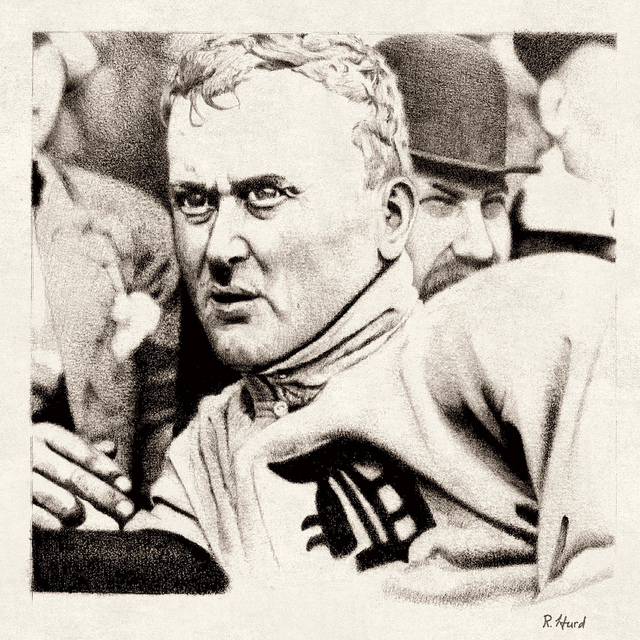 Widely regarded as the best baseball player of all time, Ty Cobb was so good that he was a near-unanimous selection for the Hall of Fame when the institution was founded in 1936, snagging 222 of 226 votes from American Sportswriters. Commonly described with words like “force,” “terror,” “will,” and “determined,” Ty Cobb was essentially a 6’1? cross between Kevin Garnett and Michael Jordan, born to a teen mother in an unincorporated county in the sticks of Georgia in 1886. According to the Ken Burns documentary Baseball, the Cobb-salient points from the YouTube video below, he “beat up a fat boy whose error had let the girls’ team win a spelling bee” while he was in fifth grade, leaving home to the parting words of “don’t come home a failure” at the age of 17. Cobb did just that, forging letters to Grantland Rice in order to convince Major League teams to sign him.

Along the way to hitting the second most hits in baseball history (think about the gravity of that for a second), Cobb made few friends. When he died in 1961, “only four people from baseball attended his funeral,” according to ESPN. The best player of all time was a jerk. That seems to be how the story goes.

Irony of ironies — the best there has ever been at the fundamental metric of what makes a good offensive baseball player is a man who almost certainly won’t see admittance to the Hall of Fame in his lifetime. Pete Rose, who was banned for life by the MLB for betting on baseball games while managing the Cincinnati Reds, leads the league in hits, and no one else is even close. Consider Jeter’s recent move — he’s facing down the end of a two-decade career, and he’s still a thousand hits away from even coming close to Rose’s record.

All the players on this list represent the best that’ve ever been when it comes to what is arguably the most difficult feat in sports — hitting a baseball that’s been thrown by a professional trying his best to make sure that you can’t hit it. Rose played from 1963-1986, a 24 year career that saw him play for three teams, the Cincinatti Reds, the Philadelphia Phillies, and the Montreal Expos. He hit the ball a lot. He was pretty good. There’s no evidence that he gambled against his teams, but the fact that he might have, while acting as the manager, is enough to keep him from the game.