For many, the 2017 NBA regular season largely played out as a top-heavy collision course between the Golden State Warriors and Cleveland Cavaliers to ultimately settle the score of an ongoing Finals trilogy. Additional drama: Kevin Durant took friendly fire from teammate Zaza Pachulia, before Durant limped off the floor and into the locker room. Without KD in the lineup, the Warriors look mortal.

Against this backdrop, fans and the media turned their collective attention to individual play and the 2017 NBA MVP. At the top of the order, Russell Westbrook and James Harden are both putting together seasons for the ages, making triple doubles come off as all but routine. Meanwhile, Isaiah Thomas is on his third team in four years, but still lighting up the competition for 29 points per game.

As a group, these five leading candidates for the 2017 NBA MVP award combine staggering statistical output alongside compelling storylines.

When going pound-for-pound, Thomas is the best player in the NBA. The diminutive athlete stands five-foot-nine and weighs 185 pounds, but he somehow manages to go for 28.9 points, 2.7 rebounds, and 5.9 assists per game. Thomas is especially efficient this season, upping his field goal and free-throw shooting percentages to career-high 46.3% and 90.9%, respectively.

This year, Thomas’s fourth-quarter exploits involve leading the league at more than 10 points per game through the final period. Like his namesake, he’ll take command in winning time and abuse the opposition for a series of floaters and lay-ups right at the front of the rim. To mix things up, Thomas will feint a hard drive to the rim, force the defense to commit, and step back to drain a dagger jump shot.

Behind Thomas, the Celtics are the most surprising NBA team this season. They emerged as the No. 1 seed in the East in front of Cleveland. The true test is playoff time; Boston could finally make a game out of things and loosen up King James’s long-running chokehold over the Eastern Conference.

In 2011, Thomas was Mr. Irrelevant; the Sacramento Kings took him dead last in the draft. Next, in 2014, Thomas split time out of a crowded Phoenix backcourt featuring the likes of Eric Bledsoe, Goran Dragic, Brandon Knight, and even a young Seth Curry. Now, it is the once left-for-dead and forgotten Thomas who has finally found a home.

Kawhi Leonard is regularly cited as the best two-way player in basketball this side of LeBron James. In 2014, Leonard first made a name for himself when he refused to back down from The King, harassing him into forced shots and ugly turnovers. On the other end of the floor, Leonard made James work, by knocking down wide-open shots and aggressively driving the lane for easy scores.

At 22, Leonard took home Finals MVP hardware after pacing the Spurs Dynasty to its fifth championship. In showing off the full repertoire, the kid averaged 18 points, six rebounds, two assists, two blocks, and one steal through five games of revenge against The Heat. Still, the naysayers refused to believe; they wrote off the soft-spoken Leonard as a mere “3-and-D” specialist, who happened to catch fire at the right time.

Instead of railing against his critics, he quietly went to work and expanded his game, with a more reliable jump shot, shifty hesitation dribble, and series of go-to post moves. The proof is in the pudding, with this gym rat significantly increasing his scoring output and improving as a playmaker with every successive season. 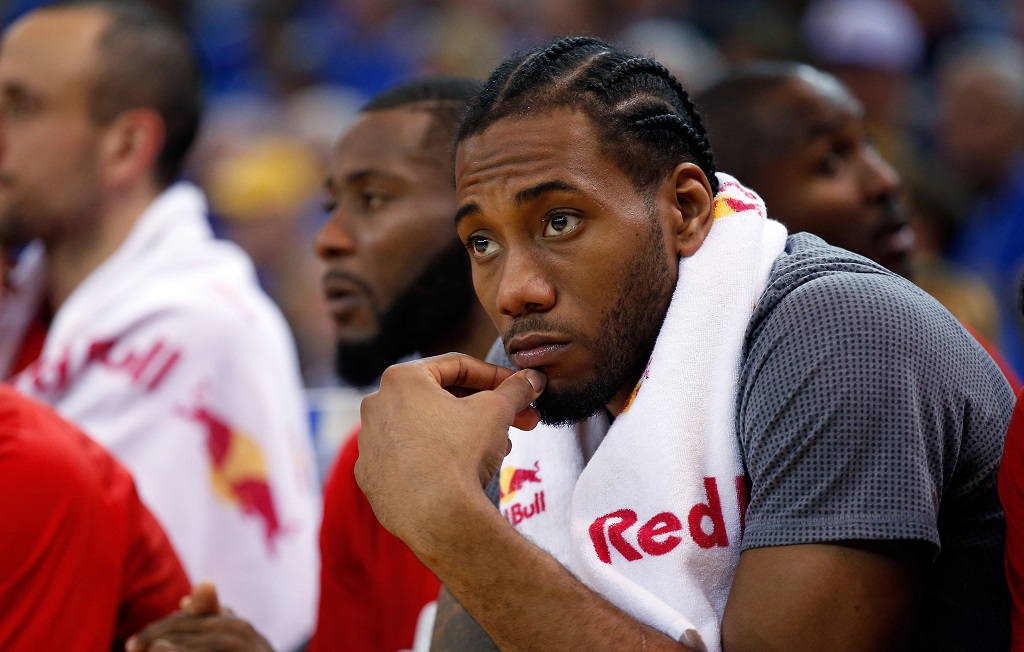 For 2016–17, Leonard is pouring in 25.5 points, 5.8 rebounds, and 3.5 assists per game, on top of his suffocating, trademark defense. Earlier this season, Leonard put it all together to showcase his MVP resume through a frenetic, late-game sequence against the Houston Rockets at home.

First, Leonard took the inbounds pass, casually dribbled up the floor, and rose up behind a screen to bury the go-ahead three. Next, Leonard chased down a streaking Harden to pin his shot against the glass and come up with the ball, after another LaMarcus Aldridge block to close out the win. The Spurs, yet again, quietly remain right behind the Golden State Warriors in the standings.

Last year, the upstart Oklahoma City Thunder pushed the 73-9 Warriors to the limit. In the aftermath, Durant’s offseason move to Golden State set the table for the Spurs Dynasty to finally get a crack at the high-octane Warriors. Now, with KD out, the Spurs and Warriors have drawn themselves to a dead heat atop the regular-season standings. At this point, Leonard can make a strong case for MVP hardware as the best player on the best NBA team.

James has entered the Michael Jordan zone, where he could likely be named NBA MVP every single year. Like Jordan before him, King James also makes it a point to dismiss, slap around, and demean the standing MVP.

Last year, James made the claim that the term “most valuable” in Stephen’s Curry MVP was open the interpretation. Shortly thereafter, James owned Curry and the Warriors through a seven-game series. He led both teams in points, rebounds, assists, steals, and blocks to bring a championship home to Cleveland, after 52 long years.

For 2016–17, James is back at it again. He’s filling up the stat sheet for career-high 8.6 rebounds and 8.7 assists, while also dropping in 26.4 points per game. Amazingly, James shows no signs of resting on his laurels since claiming his third championship. While maintaining this torrid pace, he manages to also fill in as the Cleveland Cavaliers’ General Manager.

Last January, a frustrated James took to the media and demanded that the Cavs tap the market to pick up a backup point guard and playmaker. In response, the front office worked the phones. They eventually signed the likes of Kyle Korver, Derrick Williams, Deron Williams, and Andrew Bogut for pennies on the dollar. (Cleveland signed Larry Sanders this week, after Bogut broke his leg and was ruled out for the season).

Now, James has his team; a versatile club that can either go small, as a counter to the pace and space regime popularized by the Warriors, or impose its will on the opposition through sheer size and brute force. For James, only championship rings really matter. Like clockwork, expect James to waltz right through the Eastern Conference and lay it all on the line again in the NBA Finals.

Harden and the Mike D’Antoni system were simply made for each other. D’Antoni pioneered the concept of “seven seconds, or less” with his high-octane Phoenix Suns of the mid-2000s. Steve Nash won back-to-back league MVP trophies in 2005 and 2006. He dominated the ball and picking apart defenses through a devastating high pick-and-roll.

Without Dwight Howard clogging the middle, the Beard is now free to have his way with the defense, while shooters like Eric Gordon, Ryan Anderson, Trevor Ariza, and Lou Williams stretch the floor. As a group, this team is not shy about chucking up threes; it also leads the NBA in both attempts and makes behind the arc.

Harden, of course, is the straw that stirs the drink for this Houston lineup. This year, Harden is putting up a career high 29.1 points per game, while also leading the league with 11.2 assists. Harden is at his best working out of flat, one-four sets, where he can isolate up top.

From there, The Beard will throw out a series of crossover, hesitation, and Euro-step moves into the paint. For instant offense, Harden has mastered the art of drawing fouls, by keeping his man offbalance and flailing and flopping his arms through the whistle.

The Houston Rockets are now the third seed out West, behind Golden State and San Antonio. From here, expect The Beard to put together a few monster stat lines as tuneups for the postseason. For Harden, an epic, 50-point, triple-double performance down the stretch, may figure to make up all the difference, in what is now a two-man race for league MVP.

Westbrook has remained the story of the year. He is all but set to join the Oscar Robertson club as one of only two players to average a triple-double through the entire regular season. So far, this year, Westbrook is blitzing the competition for 31.6 points, 10.7 rebounds, and 10.4 assists per game. At this point, the fact that Russ will win the scoring crown comes off as a throw-in.

Last offseason, Durant swung the entire balance of power in the league when he signed a two-year/$54 million deal with the Golden State Warriors. These 73-9 Warriors, of course, were the very same team that was down 3-1 to OKC. After this move, there was no love lost between KD, Westbrook, and the Oklahoma City Thunder.

Without Durant, Westbrook is fully unleashed to wreak absolute havoc upon the rest of the league. As a whirling dervish, Russ will go down with the trees, rip down the rebound, and push the pace. After drawing the defense, Westbrook will whip a bullet pass to Victor Oladipo out on the wing for a sweet finish. Moments later, Westbrook may bait the opposition into a lazy inbounds pass, before coming up with the steal and throwing down a hammer dunk of his own.

Oklahoma City Thunder are now the sixth seed in the Western Conference. Westbrook has willed this rag-tag bunch to a playoff berth, without longtime running mate Durant and even largely without the services of Enes Kanter, who missed two months of action after punching a chair on the bench. By definition, Westbrook is now the Most Valuable Player in the NBA.

Statistics courtesy of ESPN and Pro-Basketball-Reference.