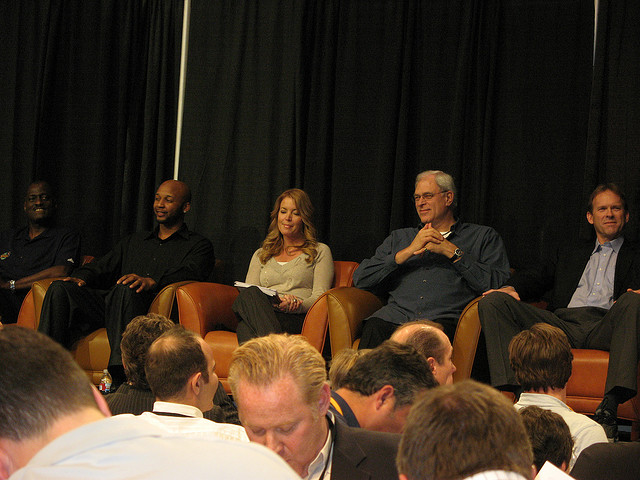 A report from The New York Post says that Phil “you don’t smoke peyote” Jackson has agreed, in principle, to a front office position with the floundering New York Knicks. While New York’s management has yet to comment on Jackson’s official position, the Post reports that it will include “president” in the verbiage. Steve Mills, current general manager/president of basketball operations, will stay with the team due to his “vast network of contacts with NBA agents and GMs,” according to the publication.

But what does this mean for Madison Square Garden? Jackson, pictured above next to fiancee and Lakers President/General Manager Jeanie Buss, hasn’t ever worked in an NBA front office before and took the job largely out of boredom, according to the Post’s sources, because Buss has no inclination in retiring. While Phil did win a championship with the Knicks in 1973 (when he rocked a no-nonsense mustache), his relationships with previous front offices have proved frosty in both Los Angeles and Chicago.

With an owner as notoriously, uh, touchy as James Dolan, it only seems like a matter of time before an immobile object meets an unstoppable force. After all, Dolan has shown time and time and time again that he’s his franchise’s own worst enemy, repeatedly hiring managers that aren’t very good and quickly replacing any semblance of competency as soon as possible. It’s gotten so bad that Knicks fans are staging a protest next week. So what will Jackson bring to the franchise?

Suggesting that Jackson’s “insight [and] knowledge will still be there whether he’s sitting on the bench or sitting in the front office” and playing down the idea that he has any power over front office affairs, embattled Knicks star Carmelo Anthony fielded questions about Jackson’s rumored involvement with the organization. Anthony’s excitement was evident, even as he steeled himself away from too much visible emotion.

I love Jim & Jeanie Buss, but we need Phil Jackson to be the face of our great organization, the Los Angeles Lakers.

Jackson, who won thirteen championships as a player and coach, has shown that he can coach a roster to victory. Whether he can build one remains to be seen. According to a now-deleted New York Post article that was captured by SBNation blog Posting And Toasting, Knicks ownership has been working “to finalize an agreement that would make Jackson the highest-paid basketball executive in NBA history. The source claims that reports of Jackson being offered an annual salary of $12 million are erroneous and that Jackson could be looking at a deal that pays him in excess of $15 million.”

An outrageous amount of money thrown at a guy who’s never done this before? Colossally unrealistic expectations hoisted on the biggest name available? Ladies and gentlemen, your New York Knicks.